Al-Monitor has exclusive information about the life of Abu Mohammed al-Golani, the leader of Jabhat Fatah al-Sham (formerly Jabhat al-Nusra). Witnesses talked about his jihad in Iraq and his journey back to Syria from where he announced the formation of Jabhat al-Nusra in 2012. 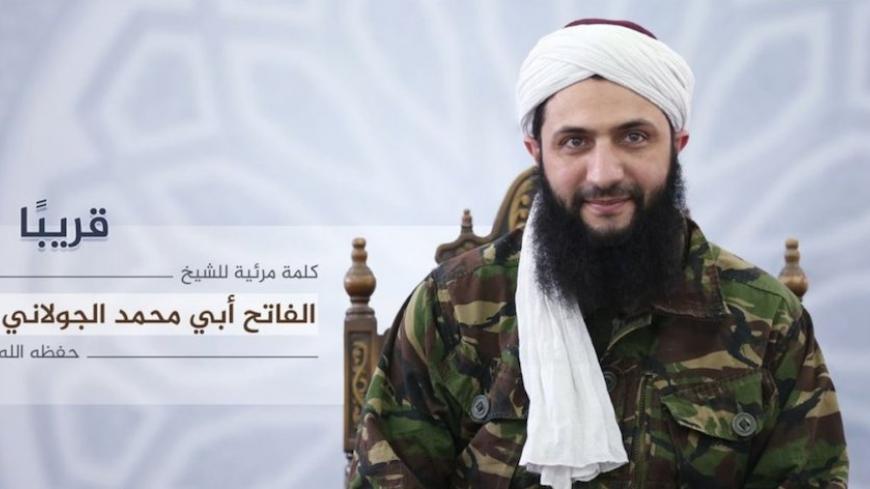 ISTANBUL, Turkey — Shalal and Amer (pseudonyms of two Syrian men interviewed by Al-Monitor) never believed that the supermarket they worked in more than 10 years ago near al-Akram mosque in the Mezze district of Damascus would turn out to belong to the family of a man who, even after revealing his face for the first time, continues to make the headlines. The man is Abu Mohammed al-Golani.

Shalal worked in 2003 and 2004 in a supermarket that belonged to the family of Shara, who later became known as Golani. Shalal and Amer are currently residing outside Syria.

According to Shalal, when Shara came back from jihad in Iraq in 2003, Shara (currently Golani) would go to the supermarket whenever his older brother Jamal, who ran the supermarket, was busy. “Shara was always lonely and depressed. He did not seem cultured or into politics. When a Kurdish janitor would visit the supermarket and start a random conversation, Shara would not engage in the conversation.”

Shalal said that judging by his looks, Shara seemed religious. “He would wear a long shirt and roll its sleeves twice up with short pants. He had a light beard,” Shalal added.

The ground-floor supermarket was very big — about four big rooms. About 20 people worked in it, knowing that it was located in a sensitive area in Damascus, where strict security measures were in force, as it was surrounded by embassies and houses of Syrian officers and artists. A young man who accompanied Golani on his journey to jihad in Iraq in 2003 also worked in this supermarket. We will refer to this young man as Hamad.

Shalal quoted Hamad as saying that Shara was kicked out of the University of Damascus when he was in his first year in the Department of Media. Golani had enrolled in the university before traveling to Iraq for jihad. Shalal and Amer said his dismissal from the university did not seem to have any relation with his ideology or trip to Iraq, but they could not confirm the real reasons behind the dismissal. “He [Golani] was arrested with a group of people while in Iraq, and several months later, they were all handed over to the Syrian regime,” Shalal quoted Hamad as saying.

Al-Monitor met with a person who worked with Jabhat al-Nusra for a certain period, but who distanced himself from the group three years ago. The person, who spoke to us on the condition anonymity, now lives outside the country. We will refer to him as Adnan. He met Golani in 2005 in al-Sabinah in Damascus three times.

Adnan told Al-Monitor that upon his return from Iraq to Syria, Golani — who was then known among Islamist groups as Abu Mohammed al-Darawi, as he was from Daraa — “worked as a coordinator with a group in charge of smuggling mujahedeen coming to Syria.” Golani’s job was to send mujahedeen through Deir ez-Zor and Hasakah to Iraq and secure their housing and food services.

It should be noted that the Syrian regime had arrested people and incarcerated them in the Sednaya military prison, 30 kilometers (18½ miles) from Damascus, on charges of joining the Jund al-Sham organization in 2005. The Syrian regime had facilitated the passage of mujahedeen from its territories to Iraq back in 2003, as the regime opposed the US invasion. Thus, the US put pressure on Iraq to confront the Syrian regime, accusing it of supporting terrorists. As a result, the Syrian regime arrested dozens of Islamists upon their return from Iraq.

Amer told Al-Monitor that in 2005 he ran into a former co-worker from the supermarket in Damascus, who told him that Golani’s family had no news of him since 2004 and that his parents believed he was likely to be in Aleppo.

Shalal said that Hamad told him they went to Iraq with the help of Mahmoud Qul Aghassi, aka Abu al-Qaqaa, who emerged as an Islamist advocate and a preacher in Aleppo in 2001 and was reportedly in charge of sending mujahedeen to Iraq. Qaqaa was said to belong to Syrian intelligence and he was shot dead in 2007.

Shalal continued, quoting Hamad, “We were around 60 people to meet in Damascus [and go to Iraq] during the invasion of Iraq in 2003, under the pretext of going to a trip to Iraq [to cover for their real purpose, which was jihad]. Our IDs were then collected and placed in an envelope, and the envelope was handed to a sheikh (who was referred to as Sheikh Abu al-Qaqaa). We then got on tourist buses heading to Abu Kamal in the countryside of Deir ez-Zor. There were people with us communicating with the Syrian security forces and border guards (known as al-Hajana), who opened the way for us to enter Iraq.”

Adnan, the man who was close to Jabhat al-Nusra and who spoke to Al-Monitor, was detained in the Sednaya prison in Damascus from 2005 to 2011 on charges of belonging to Islamist groups. With the start of the Syrian revolution in 2011, he was released with his companions. Adnan said that Golani and his group were part of the Jund al-Sham cells in 2003, and he described Golani as “a cultured and committed man, and he is good at a type of martial arts.”

Adnan denied the regime’s arrest of Golani in the Sednaya prison and said, “There were men from Golani’s group with us in prison, and they told us that Golani left Syria to Iraq in 2006.”

He added that one of the members of Golani’s group in prison was named Amer al-Msalima, who, under the Syrian revolution, formed the Islamic Muthanna Movement in Daraa and was killed in the fighting last year. Msalima’s brother consequently took over the leadership of the movement.

According to Adnan, in late 2011, Golani founded with his companions in Syria a cell made up of six people: four Syrians and two men from Iraq. “Golani and his companions who founded the cell later established Jabhat al-Nusra in Damascus in the presence of 33 people, and the group’s first statement was issued mid-2012.”

Shalal said that Golani would sometimes visit the mosque and that he would receive religious lessons in a school where one of the children of Sunni Muslim scholar Mohammad Said Ramadan al-Buti would give courses. “Golani’s family was on good terms with Buti’s family.” And the family, according to Amer, is related to Syrian Vice President Farouk al-Sharaa.

According to Amer, Shara (Golani) has four brothers: Jamal al-Shara (who ran the supermarket), Ali al-Shara, who taught at the Faculty of Arts of Damascus University, a brother who was serving in the military service and another who lives in Saudi Arabia, both of whom Amer and Shalal know nothing about.

Amer denied that the photos leaked back in 2014 were of Golani, and said that “the man who appeared on TV on July 28, 2016, as the leader of Jabhat al-Nusra is indeed Ahmed al-Shara.”

*Disclaimer: The names in the article are pseudonyms used upon the request of the sources for security reasons.

Activist and journalist Azad Kalash contributed to the article.