Concerned that the Islamic State has an advantage in recruiting foreign jihadists with its declared Islamic caliphate, al-Qaeda’s official branch in Syria, Jabhat al-Nusra, has declared an Islamic emirate. 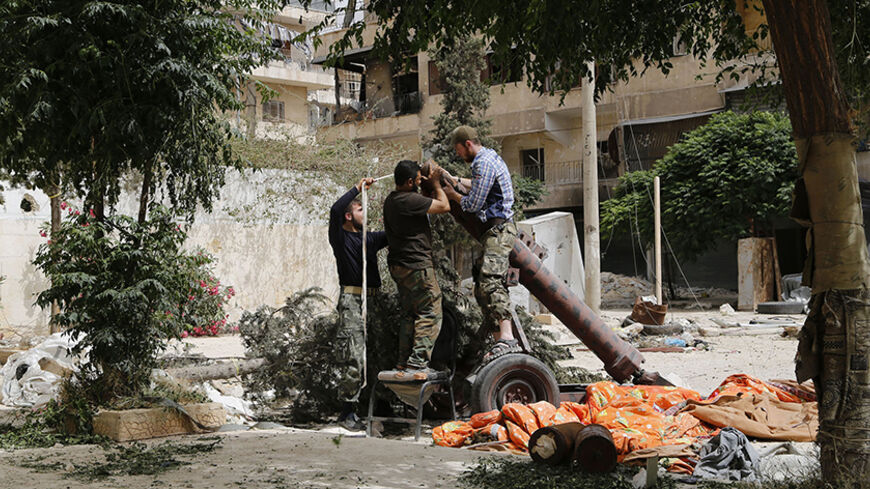 ALEPPO, Syria — Jabhat al-Nusra did not deny the authenticity of the audio recording attributed to its leader Abu Mohammad al-Golani, in which he announced that he is seeking to establish an Islamic emirate in the areas where his militants are deployed. However, a statement issued on July 12 by the Manara al-Bayda, Jabhat al-Nusra's media channel, implicitly affirmed the authenticity of the recording and announced clearly that Jabhat al-Nusra is “seeking to establish an Islamic emirate," adding, "We have yet to declare its establishment.”

According to the Aleppo Media Center, Jabhat al-Nusra's leadership and militants held a high-profile meeting to discuss the restructuring of the organization. During the meeting, the attendants were surprised to see Golani unveil his face and promise his soldiers that they would establish an Islamic emirate.

The statement ended all doubts about the authenticity of the audio recording. The similarities between the wording of the statement and Golani’s speech were striking, with Golani saying, “We will not allow any person to reap the fruits of your jihad, whatever happens to us.”

Jabhat al-Nusra is trying to pull the rug from under the feet of its jihadist rival, the Islamic State (IS, formerly known as the Islamic State of Iraq and al-Sham), especially following the great losses inflicted upon Jabhat al-Nusra in the last battles of Deir ez-Zor. Jabhat al-Nusra wants to attract "migrants" — or foreign militants who came to Syria for jihad — and put them to work under its leadership. IS’ striking announcement of the establishment of an Islamic caliphate led by Abu Bakr al-Baghdadi on June 30 has galvanized foreign fighters and led them to join IS, which concerns Jabhat al-Nusra.

An important point raised by the source was that the “[establishment of the] emirate does not compel the other factions on the ground to pledge allegiance to the emir. The caliphate state, however, requires all militants to work under the umbrella of the caliphate.”

He continued, “Jabhat al-Nusra does not want to clash with the other opposition factions with which it shares control over the liberated areas in Syria, especially because it is only a single faction that doesn’t seem to be the strongest among the scores of groups in Syria, such as the Islamic Front, the Mujahideen Army and Ajnad al-Sham. In addition, there are the large number of factions affiliated with the Free Syrian Army, such as the Hazem Movement, Syrian Revolutionaries Front and others. These are deployed along with Jabhat al-Nusra in Aleppo, north of Idlib, Daraa and south of the Rif Damascus governorate.

However, what was striking is that the Manara al-Bayda statement specified a period of 10 days to establish “a role for the judiciary, security stations and the provision of public services to replace the 'legitimate committees,' which Jabhat al-Nusra share with other factions to manage the affairs of the liberated areas.” The announcement by Jabhat al-Nusra affirmed that it had withdrawn from the Sharia Council in the rebel-held areas of Aleppo on July 8.

In addition, Jabhat al-Nusra owns an independent services institution called the Public Management for Services. It has been operating since last December in the rebel-held areas in Aleppo, providing residents with water, electricity and other services. It also provides flour for bakeries and fixes the daily damage that befalls the electricity and water networks caused by the continued bombardment of barrel bombs that Aleppo has been suffering for seven months.

Although Jabhat al-Nusra is not accepted by many opposition currents, it nevertheless enjoys a significant popular base that has to an extent helped them to establish the emirate. The residents of Aleppo trust Jabhat al-Nusra because of its militants, who are known for being fierce and determined in their battles against the regime. Moreover, the way it held corrupt brigades accountable for its actions, including militias that rob, extort money and exploit the state of war and its chaos, has led many to support the organization.

Othman, a resident in the al-Mayssar neighborhood in Aleppo, said, “Jabhat al-Nusra sacrificed a lot in its war against the regime and Baghdadi’s state. I think that it has the right to declare the Islamic emirate after hundreds of martyrs fell.”

Safwan, who is still in college and works in the aid field, offered Al-Monitor another point of view, saying, “The fighters have no right to determine the shape of the state, and I don’t think that the time is right to declare the establishment of states and emirates.”

Safwan added, “All efforts should be concentrated on bringing this murderous regime down. When this has been accomplished, the shape of a new state will be determined through ballot boxes, while partisanship and the division of forces will only benefit [President] Bashar al-Assad."

Despite the poor sound quality, Golani’s audio recording raises many important issues. Golani identified his enemies by saying, “This emirate, my brothers, will take exception with whomever wishes bad things for Muslims. These will be comprised of the regime, the exaggerators, the criminals and the [Kurdistan Workers Party].”

Jabhat al-Nusra is trying to compete with IS to attract jihadis from around the world by announcing its Islamic emirate after IS stole the spotlight with the announcement of the Islamic caliphate.

The possibility of clashes with the opposition factions seems low, especially since Jabhat al-Nusra has good ties with the majority of the factions.

A rebel leader, who wished to remain anonymous, told Al-Monitor that a clash with Jabhat al-Nusra was unlikely in the wake of the declaration of an emirate. According to him, Jabhat al-Nusra is part of Syrian society as the majority of its members and leaders are Syrian. He said, “We had already agreed to only fight Assad’s regime and the corrupted.”

He noted that the potential announcement of the Islamic emirate does not mean the establishment of a state for Jabhat al-Nusra, saying, “There is no region in Syria that Jabhat al-Nusra is controlling alone. Thus, I do not think that our relations will be affected by this announcement.”