What appears to be divisions among the leadership of terrorist allies Jabhat al-Nusra and al-Qaeda in Iraq may signal greater difficulties in controlling radical jihadists in Syria. 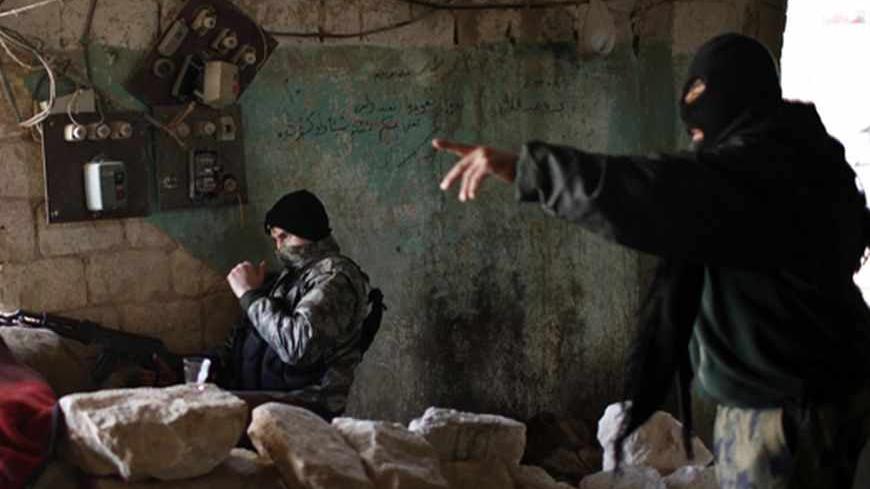 Fighters from the Islamist Syrian rebel group Jabhat al-Nusra take their position on the front line during a clash with Syrian forces loyal to President Bashar al Assad in Aleppo, Dec. 24, 2012. - REUTERS/Ahmed Jadallah

Every yesterday in Syria is better than today, and each today will remain less bad than tomorrow. It is only hope — a hopeless hope — that gives Syrians a reason to live, just in case they were not killed in the regional war fought by them on their land.

It is getting more complicated. The political and military wings of the opposition are disengaged, those on the ground each think one way, and the ones in hotels and behind desks think in another way — and often not at all alike.

Politicians can negotiate as much as they want, they can issue statements, give orders, but nothing is going to be implemented — the real decision-makers are in Syria, raising their guns and fighting different wars between Aleppo and Daraa.

The opposition's military wings, though united by blood, are also divided because of differing agendas. It is a game of survival. Most of the opposition's fighting brigades are losing ground across the country either to government forces and its allies, or to what used to be the strongest, most organized and most controversial faction in the opposition, Jabhat al-Nusra.

Jabhat al-Nusra, an al-Qaeda affiliated faction, has a strong presence around Syria. They have been a nightmare to government forces in several areas around the war-torn country. A group of Syrian jihadists, backed by brigades of foreign fighters, some Arabs and others from around the globe, Jabhat al-Nusra's emergence was a turning point in the Syrian revolution's path.

But Jabhat al-Nusra's yesterday seems to be much better than today. A serious split is threatening the group's unity at a very crucial and sensitive time, given the preparations and negotiations for a US-Russia sponsored conference on Syria — in which Jabhat al-Nusra will have no part and will want to spoil.

Why are brothers in arms, ideology and blood fighting? Weeks ago, when Abu Bakr al-Baghdadi, leader of the Islamic state of Iraq (al-Qaeda in Iraq), called on Abu Mohammad al-Golani, Jabhat al-Nusra's leader, to merge under one name, the answer came back negative.

Golani instead linked his group directly to al-Qaeda's general leader Sheikh Ayman al-Zawahri. He clearly wanted to say that Jabhat al-Nusra is just another direct branch from al-Qaeda, not a franchise.

There were no direct comments from Zawahri's side and neither from Baghdadi. Later on, there were conflicting reports on Golani's well-being.  First, he was reported killed amid a fierce battle in the countryside just outside Damascus, then it was announced that he sustained injuries. Less than a week after Golani's injury, news of Baghdadi's arrival in Syria circulated. He came to Aleppo along with hundreds of Arab and foreign fighters. Syria is now an international land of jihad, a scene similar to the one in Iraq when Abu Mosab Zarqawi arrived. According to an al-Qaeda affiliated Lebanese cleric, the enemy this time is not the United States but the "Persian occupation by Alawite, Hezbollah and Iranian forces," and if there was a Western invasion, "the mujahedeen [holy warriors] are there to defend the ummah [nation]."

In the wake of the new givens, Golani's role is expected to diminish and Jabhat al-Nusra's main brigades will join the new "Islamic state of Iraq and the Levant," the new state Baghdadi announced on April 8, 2013. Baghdadi's speech then included many points that were to be understood as warnings to Golani. He said, "It is time to declare to the Levant and to the world that Jabhat al-Nusra is simply a branch of the Islamic state of Iraq," and that Golani was dispatched from Iraq to Syria to help raise the basis of the new branch there.

The most important thing here is that Baghdadi's speech came only two days after al-Qaeda leader Zawahri released an audio message calling for unification of the jihad in Syria, another indication the move was already planned and the announcement by Baghdadi was only to give Golani a wake-up call. As already known, Golani refused the alliance by pledging loyalty to Zawahri directly. The latter did not respond because Golani practically did not obey his orders — orders that are not casual orders but part of a new vision Zawahri presented in his last audio message.

On that occasion, Zawahri spoke about the new document issued by "Qaedat al-Jihad" — al-Qaeda's official name — under the title "Nusrat al-Islam" — or supporting Islam — which seem to be presenting a new approach by al-Qaeda. Zawahri practically announced the end of the "al-Qaeda franchise" by saying: "The first matter is that all parties should focus on combining their forces and unity. The second matter is that all parties should be aware of the objectives of this unity and accord."

Golani failed to understand the headquarters' message and he had to pay the price. The opposition now has to understand the new status of Jabhat al-Nusra, or whatever name it will be given. It is no longer part of any revolutionary struggle for Syria — it is now part of the global jihad.

This is a mixed message for the more moderate opposition forces backed by the United States and its allies. On the one hand, it helps somewhat to draw a clearer line between them and al-Qaeda affiliates.  But even that is hard to say. More problematic, the Western-backed opposition will have to fight another battle — this time a fiercer battle — with even more divided radical forces. Once again, a new saving stick for Syrian President Bashar al-Assad and his regime, and another sign that a military solution is a fantasy.