Following the Islamic State's advance, Jabhat al-Nusra has also moved to the Turkish border, routing moderate rebels and dashing the hopes of “train and equip” proponents eager for a renewed war on the Syrian regime. 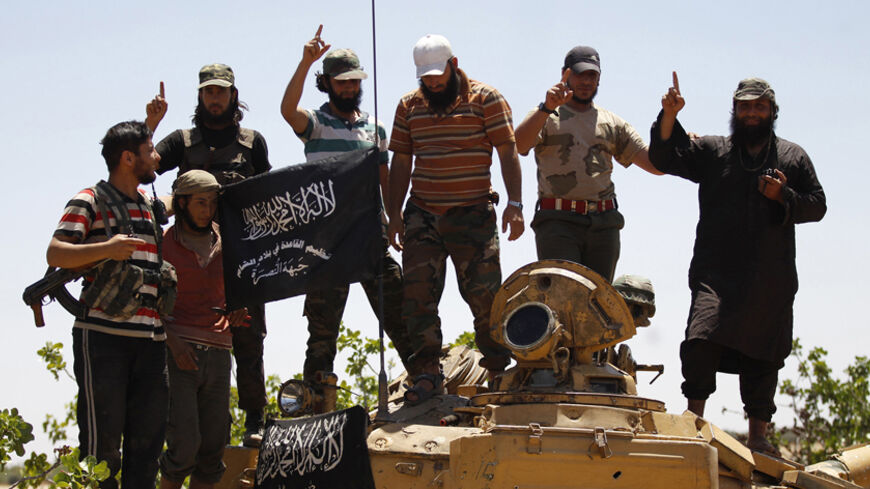 The Syrian Revolutionaries Front and the Hazm movement, two of the main groups slated to benefit from the plan to “train and equip” moderate Syrian rebels, have taken a severe blow on the battlefield, just as Turkish President Recep Tayyip Erdogan sought to promote the “train and equip” program as a precondition for Turkey’s support against the Islamic State (IS). The blow was dealt by Jabhat al-Nusra, al-Qaeda’s franchise in Syria.

IS’ declaration of a caliphate following its capture of Mosul in June came as a severe setback for Jabhat al-Nusra, when many of its fighters swore allegiance to the new “caliph” Abu Bakr al-Baghdadi, leading the group to cede its positions in Deir ez-Zor to IS. In recent days, however, the group made some surprise moves to make up for its losses.

Jabhat al-Nusra had declared an emirate in the Idlib countryside to stop militants from gravitating to IS, even though it nominally rejects the establishment of a Sharia state before the Syrian regime is toppled. Following an intensified campaign against the regime in the southern region between Quneitra in the Golan Heights and Daraa, the group advanced also in the Idlib countryside in the north over the past week, capturing Maarshorin, Maasaran, Dadikh, Kafr Battikh, Kafr Ruma, Khan al-Subul and then Deir Sunbul, the hometown of Jamal Maarouf, the commander of the Syrian Revolutionaries Front. The militants then swarmed on Sarmada, thus coming as close as 6 kilometers (3.7 miles) to the Bab al-Hawa crossing on the Turkish border.

The Syrian Revolutionaries Front, having lost also its positions in Hama to Jabhat al-Nusra, was left with almost zero territory under its control. The Hazm movement, for its part, withdrew from its strongholds in Idlib, including Khan al-Subul. While maintaining its presence in Aleppo under a nonaggression pact with Jabhat al-Nusra, it was still required to surrender its checkpoints.

If Ar-Raqqah Media is to be believed, the moderate rebels lost not only territory to Jabhat al-Nusra but also about 80 TOW anti-tank missiles supplied by the United States as well as 10 tanks, four BMP combat vehicles, dozens of other vehicles, 130 cannons and ammunition. Ironically, until recently they had seen Jabhat al-Nusra militants as “brothers,” conducting joint operations and even occasionally sharing weapons with the jihadists.

What if Jabhat al-Nusra turns to the border?

It is hard to predict whether Jabhat al-Nusra will attempt to capture the Bab al-Hawa border crossing, which is of vital logistical importance for opposition-held areas and is currently controlled by the Islamic Front, an alliance of several Islamist factions.

The organization appears to be emulating IS, whose capture of Raqqa in 2013 came after its elimination of other armed groups in the region. Yet, Jabhat al-Nusra has closer ties with the Islamic Front. Whether it turns its guns on the Islamic Front will depend also on whether the factions comprising the front cooperate with the United States.

Those who slammed Jabhat al-Nusra’s inclusion on the terror list in the past have become even more critical of it being a target in the war on IS. The US bombing of Jabhat al-Nusra’s positions, including its base in Kafr Daryan north of Idlib, are likely the reason that prompted the group to take on the moderate rebels. The US strikes on Jabhat al-Nusra targets along with those of IS have led many to see the moderates as US agents.

Though it seems an unlikely prospect, al-Qaeda may thus emerge as a neighbor to Turkey next to IS, which already controls the Jarablus and Tell Abyad crossings, should Jabhat al-Nusra militants eventually attack the Islamic Front and seize the Bab al-Hawa crossing. Earlier this year, Turkey allowed a rebel coalition including Jabhat al-Nusra to use its territory to mount an offensive on the Armenian-populated border town of Kassab. The rebels’ seizure of the border crossing there sparked harsh international reactions against the Justice and Development Party (AKP) government.

The situation today, however, is not the same, for Jabhat al-Nusra is targeting or is likely to target groups that Turkey considers allies. The prevailing expectation is that Jabhat al-Nusra will settle for shared control of the region with the Islamic Front rather than fighting it for the border crossing.

Also, Jabhat al-Nusra’s elimination of moderate factions could play into the regime’s hands. The defeat of the moderates has reinforced skepticism about whether CIA plans to train and equip 5,000 vetted rebels would succeed. Turkey’s first and foremost hope from the program was to build a strong opposition that would topple the regime. Hence, Jabhat al-Nusra’s surprise advance to the Turkish border has been met with deep silence in Ankara.

If the United States expands its airstrikes to Jabhat al-Nusra militants near the Turkish border, the Syrian regime will save some ammunition in this region. But one should keep in mind that the US airstrikes, which have failed to produce the desired outcome against IS so far, might result also in Jabhat al-Nusra consolidating its grip on the ground. The statements of fighters who left the Islamic Front to join IS in recent weeks indicate that the intervention is backfiring.

But while the United States tackles IS and Jabhat al-Nusra in the north, the regime could intensify its campaign in Syria’s central and southern regions, especially in the Damascus countryside. In another key calculation, the regime is watching for an opportunity to attack Aleppo’s “liberated” areas as opposition forces grapple with each other or are hit by US raids on the northern front. For the AKP government, which has been calling for a buffer zone, a no-fly zone or safe regions at the border, this makes for a nightmare scenario.