After routing Syrian rebels from Idlib, Jabhat al-Nusra hopes to create an Islamic emirate to rival the Islamic State’s caliphate. 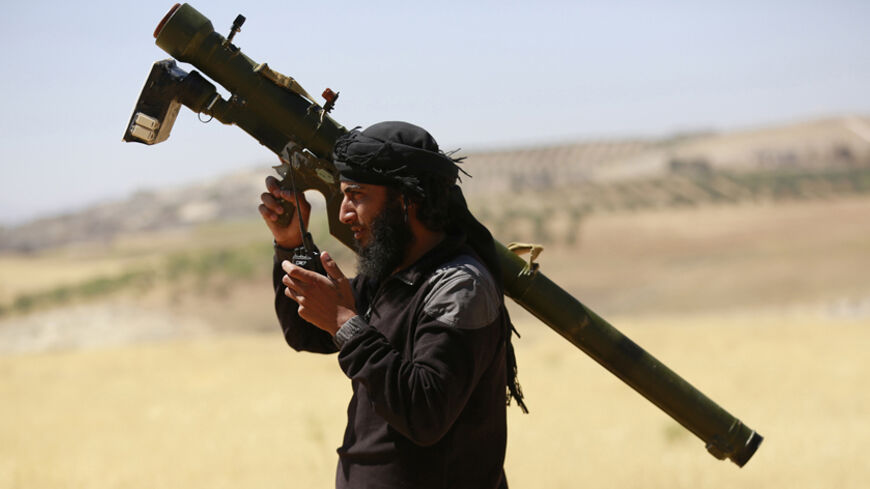 A Jabhat al-Nusra fighter talks on a walkie-talkie while carrying his weapon at the Al-Khazan frontline of Khan Sheikhoun, northern Idlib province, May 17, 2014. - REUTERS/Hamid Khatib

A correspondent in Damascus
November 13, 2014

ALEPPO, Syria — Jabhat al-Nusra is carrying on with its project to establish its own emirate in the north of Syria and pull the rug from under the Islamic State (IS). The latter's caliphate, announced June 30, has attracted jihadists from around the world and poached many al-Nusra members and foreign fighters.

Al-Nusra’s leader Abu Mohammad al-Golani had promised his militants the “birth of an Islamic emirate” under his command in a message broadcast online in July.

The weakness of the brigades under the umbrella of the Syrian Revolutionaries Front (SRF), led by Jamal Maarouf, and the fact that these brigades are accused of setting up “diesel checkpoints” to steal from passersby, gave enough opportunity for al-Nusra to attack Maarouf and his members. According to al-Nusra’s supporters on Twitter, Maarouf is a “tyrant.” But what about the Hazm Movement and other groups, and why did al-Nusra attack them?

Jabhat al-Nusra found in Idlib a suitable place to declare its emirate and compete with IS to attract jihadists from around the world. Idlib is close to the Turkish border and isolated from major fighting fronts with IS or President Bashar al-Assad’s forces. Al-Nusra also realized that it is bound to win its war against the Free Syrian Army (FSA) on account of its administrative and military superiority, as many FSA fighters refuse to use their weapons against anyone other than Assad and IS.

The presense of brigades of ill repute within SRF helped al-Nusra win popular support for its campaign, allowing it to expand its war and include all US allies in the area in what is known as the “moderate opposition.”

The Syrian rebels see al-Nusra as walking in the footsteps of IS. The latter began its war against the Northern Knights Brigades, calling the group corrupt. It then gradually went up against most opposition factions and took control over large areas in northern Syria, before opposition factions led by the Mujahideen Army forced it to move to the east of the country. IS regained its forces there, taking advantage of the desert environment with which its fighters are well trained to cope.

The clashes between al-Nusra and SRF began on Oct. 26 in the town of Bara, in Idlib’s countryside. The clashes followed Maarouf’s military campaign there, which searched for wanted men who had taken refuge with al-Nusra. The events developed into a war between al-Nusra and SRF and ended in the former taking full control of Jabal al-Zawiya — Maarouf’s stronghold — including the village of Deir Sunbul, Maarouf’s hometown.

Sources with ties to Maarouf who wished to remain anonymous told Al-Monitor that he fled to Turkey and no longer has any brigades in Idlib, with the exception of certain groups in Idlib’s southern countryside and southern Syria, where no clashes erupted between the FSA and al-Nusra.

Meanwhile, the Hazm Movement withdrew from Idlib’s countryside to Aleppo and gathered all the gear it could get, following mild skirmishes with al-Nusra. It also took advantage of the agreement on Aleppo's neutrality on the clashes, due to its critical situation and the regime's closeness to besieging its “liberated’ neighborhoods.

However, tensions between the FSA and al-Nusra soon moved to Aleppo’s countryside, where the latter besieged the Northern Knights Brigades on Nov. 4. The brigades burned a T-62 tank before withdrawing from Menagh in Aleppo’s northern countryside. Al-Nusra also killed a field commander from the Dawn of Freedom Brigades on Nov. 8, according to a statement of which Al-Monitor received a copy.

It is true that al-Nusra aims to establish an emirate. This is becoming obvious since the group has gained full control over certain towns in northern Idlib, where it has also created its own courts. However, the presence of Islamic factions such as the Islamic Front and Jund al-Aqsa in other areas of Idlib’s countryside might impede al-Nusra’s objectives. It is certain, nonetheless, that al-Nusra’s step came as a proactive blow for the “moderate opposition.”

In his appearance after defeating Maarouf in Jabal al-Zawiya in Idlib, Golani started his speech by warning about the danger of the international coalition. He said that the coalition, along with “US spies,” aim to eliminate all “Islamic factions” and “groups that do not comply with Western policy.” He added, “We have made a decision to cancel the SRF.”

Golani also noted in his speech the difficulties facing al-Nusra after its conflict with IS, saying that foreigners make up “70% of al-Nusra’s leadership. After the conflict, the number decreased to 40%.” He added, “We are always welcoming foreigners.”

One could say that this is the end of SRF in northern Syria, while the Hazm Movement withdrew its forces to Aleppo — the city where the clashes might move at any given moment. The FSA in northern Syria has been defeated by Assad, IS and now al-Nusra, leaving the United States with few options on the ground.