While Aleppo is not entirely under the control of Jabhat al-Nusra, the group has a strong presence in many of the city's neighborhoods and is currently fighting to take hold of villages north of Aleppo province, where they are facing Lebanese Hezbollah troops that are fighting alongside the Syrian regime. 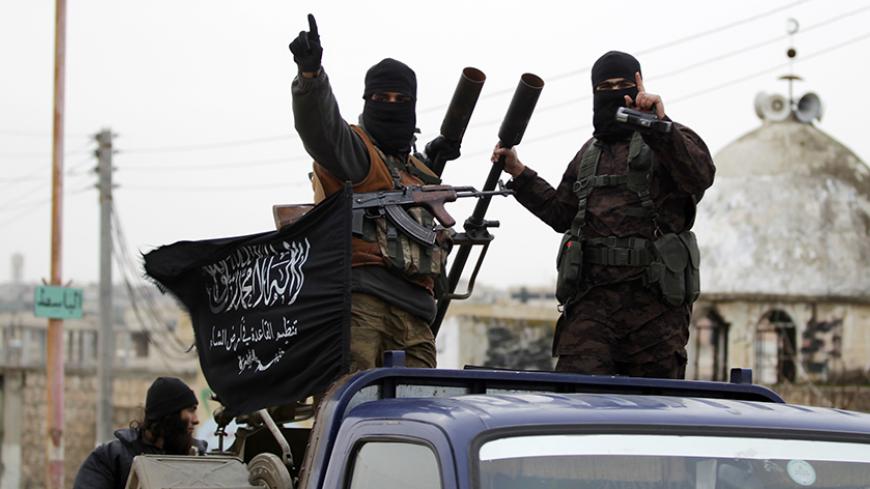 Members of al-Qaeda's Jabhat al-Nusra gesture as they drive in a convoy touring villages, which they said they have seized control of from Syrian rebel factions, in the southern countryside of Idlib, Dec. 2, 2014. - REUTERS/Khalil Ashawi

ALEPPO, Syria — Khaled was a theater student in Damascus prior to working as a disc jockey and then joining the rebel group Jaish al-Mujahideen. He is now fighting in the ranks of the local al-Qaeda affiliate, Jabhat al-Nusra.

The shaggy-haired man said that he had received training in Idlib from Jabhat al-Nusra about a year ago, and that he was now working as a tank commander in Aleppo province.

Jabhat al-Nusra’s ideology is similar to that of the Islamic State (IS), but it has largely avoided the brutal tactics and repression of civilians the group it is fighting against in the Aleppo province is known for. Those in its ranks are believed to be mostly Syrians, in contrast with the high number of foreigners who have joined IS.

Many Jabhat al-Nusra fighters wear their hair long, "as the prophet did," but Khaled could easily be taken for any university student with "alternative" tendencies on the streets of many Western capitals.

Khaled’s move to join Jabhat al-Nusra came after his father was imprisoned by the regime about 1½ years ago. His father, a bus driver plying the route between Damascus and Aleppo, was found to have assisted a high-ranking officer in his defection to rebel forces. There has been no word of him since his arrest.

Late last year, the Syrian Network for Human Rights estimated that about 85,000 people were being held arbitrarily in regime prisons.

In early November, Jabhat al-Nusra attacked US-backed Harakat Hazm and the Syrian Revolutionary Front (SRF) in neighboring Idlib province on what has been deemed by most "an excuse," taking from them weaponry and establishing virtually unrivaled control of the area.

According to a commander of another group in the area that did not get involved in the fighting, Jabhat al-Nusra took at least nine tanks, several cars and pickup trucks, heavy machine guns, anti-aircraft guns, massive amounts of ammunition, TOW anti-tank missiles and bulldozers from Hazm’s bases alone.

Some of that material has been shifted to Aleppo, as have some of the men.

Jabhat al-Nusra is stronger in some areas of the city than others, and has set up more checkpoints on the road from the Turkish border since Al-Monitor’s last visit in late October. The area is nevertheless still mostly under the control of the more moderate Jabhat Shamiya, a group recently formed on the basis of the Islamic Front that fights alongside Jabhat al-Nusra on several fronts but is not officially aligned with it.

Two cars loaded with explosives blew up on Jan. 10 at one of Jabhat al-Nusra’s checkpoints on the road to the border, killing a number of civilians and civil defense rescue workers who had rushed to the site following the first blast, as well as Jabhat al-Nusra fighters. A recent spat of car bombs in opposition areas has heightened concerns of infiltration by IS and others.

Khaled was part of Jabhat al-Nusra’s offensive against the SRF and Harakat Hazm in Idlib before shifting to the Aleppo front. He had spent roughly eight months near Maarat al-Numan, until Jabhat al-Nusra gained supremacy among anti-regime groups in the region further to the west, and implied that the operation had long been under preparation, calling the moderate, nonideological SRF a "mafia."

"Maarouf collaborated with the regime," he said, referring to SRF leader Jamal Maarouf. "He must have. For two years the SRF didn’t make any progress" at the two remaining military bases held by government troops in the region until Jabhat al-Nusra took them over.

After it had gotten the SRF and Harakat Hazm out of the way, Khaled said, "Jabhat al-Nusra finished Wadi Al-Deif and Al-Hamidiyeh off in 24 hours."

Rumors of collaborationist and conspiracy theories have long dominated discourse on and in the uprising against Syria’s brutal, "mukhabarat-culture" police state.

A commander of a rival group told Al-Monitor that there was instead evidence of connections between the regime and Jabhat al-Nusra, as evinced by the rapid takeover of the bases and low fatalities. Syrian state-run television failed to mention the loss of the two bases it had fought hard for years to keep.

A member of Asala wa Tanmiyah, a faction that took part in the offensive alongside Jabhat al-Nusra and the Islamist Ahrar al-Sham, nevertheless called the rumor of collaboration of any sort of accord with the regime "absurd."

On Jan. 10, Jabhat al-Nusra claimed responsibility for an attack across the border in Jabal Mohsen, an Alawite area in Tripoli, northern Lebanon, fueling concerns about further cross-border operations.

Whether or not many of its foot soldiers will leave Jabhat al-Nusra as soon as they have a valid alternative will depend in part on how long the conflict drags on, said a commander of a formerly important group that has lost men to more extremist, wealthier groups and "boats to Europe."

The general consensus among most Syrians Al-Monitor spoke to is that those in opposition areas have little choice but to see the al-Qaeda affiliate as its main bulwark against a power that has been killing and starving them for years, even if they reject its ideology.

Though protests have been held in Idlib against Jabhat al-Nusra, in Aleppo it has less of a perceived virtual monopoly on power and coexists somewhat warily alongside even Harakat Hazm, which it routed in Idlib. A commander from the latter taking Al-Monitor's reporter toward the Handarat front was easily waved through a Jabhat al-Nusra checkpoint in recent days.