Responsibility for the assassination of Free Syrian Army Cmdr. Jamil Radoon Aug. 26 remains unclaimed, raising suspicions whether Jabhat al-Nusra could be behind this act. 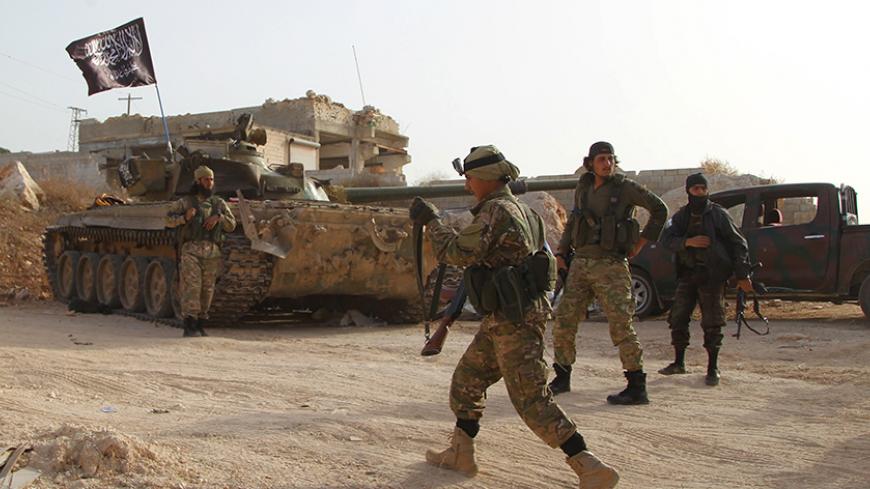 Members of al-Qaeda's Jabhat al-Nusra carry their weapons as they move toward their positions during an offensive to take control of the northwestern city of Ariha, in Idlib province, May 28, 2015. - REUTERS/Ammar Abdullah

While this incident took place in the southern Turkish town of Antakya, it also raised questions about security across the border. The blast from explosives placed under his car hit only Radoon, who died in hospital shortly afterward. No group or individual has claimed responsibility as of yet.

The commander and defected colonel had led a force of a few thousand fighters in his group Suqour al-Ghab, which operated mostly in his home region of northern Hama and had cooperated with others in the Jaish al-Fatah operations center on the front lines there.

He had, however, long felt threatened by a number of other groups within Jaish al-Fatah, including the local al-Qaeda affiliate Jabhat al-Nusra. Recipients of US TOW armor-piercing anti-tank systems — which other commanders working in the area told Al-Monitor had proven decisive in recent advances there — Radoon’s group was "seen as competition," as one member of an FSA political office put it, due to their effectiveness. Jabhat al-Nusra receives many fighters and support on the basis of its reputation for being the strongest fighting force on the ground.

The Syrian regime also had its reasons for wanting the defector dead, as he was one of the few major non-Islamist commanders with military experience whose fighters were continuing to advance against it.

The cities of Idlib and Jisr al-Shugur were taken in recent months by the Jaish al-Fatah coalition, and progress has been made in northern Hama and toward the ruling Assad family’s coastal stronghold of Latakia. Russian reinforcements to bolster Bashar al-Assad’s regime were reportedly sent in, shortly before the loss of the last military base held by the regime in Idlib, the Abu al-Duhur air base.

This seems to point to how critical the situation has become for government forces, which have, however, over the years relied on foreign militants and military experts sent by Iran, Iraqi militias and the Lebanese Hezbollah in order to remain in power.

A journalist from Radoon’s hometown, Qalaat al-Madiq, told Al-Monitor that the FSA commander had also suffered a previous assassination attempt by members of Ahrar al-Sham, another major Islamist component of Jaish al-Fatah, inside Syria. He said that the matter received little publicity, and that a tenuous agreement of some sort was made between the groups as part of an attempt not to deflect attention from fighting against the regime.

Several others Al-Monitor spoke to in Turkey’s southern Hatay region were instead adamant that Jabhat al-Nusra was most likely behind the killing, pointing out that Radoon had avoided going in for months due to perceived threats from the group. Men from Radoon’s group declined requests to comment on the matter in the days following his death.

Radoon had told Al-Monitor in mid-October 2014 that all those who had received US weaponry or foreign training were wary of admitting to it.

A defected pilot who later led the Syrian opposition’s military council division for Raqqa, Col. Mohammed Moataz Raslan refused to comment on who might have been behind the assassination, but he did tell Al-Monitor that about 40 of Radoon’s men had been "arrested" by Jabhat al-Nusra in late 2014. Raslan said he had personally mediated on behalf of the FSA for their release.

"Jabhat al-Nusra’s Saudi-born judge, Muslieh al-Allayani, wanted the men to announce that they were not affiliated with Radoon as a condition of their release. I spoke to them and argued that Radoon had done nothing to them," and had never fought against them, Raslan said. Their release was eventually secured after roughly 20 days imprisonment, he added.

The detention occurred not long after the attacking and routing of the Syrian Revolutionaries Front (SRF) and the Hazm Movement — both of whose men had also received weaponry and training abroad — from Idlib in between late October and early November by Jabhat al-Nusra. SRF leader Jamal Maarouf claims that Jabhat al-Nusra was able to gain support for it through propaganda and better resources, as little of the much-touted Western aid ever made it to the moderate groups.

Maarouf now lives in southern Turkey, as do many defected officers and former members of less Islamist groups. Several of the former regime officers Al-Monitor spoke to now enter Syria only under pseudonyms, and members of the Hazm Movement still inside Syria have been known to put Jabhat al-Nusra banners on their Facebook pages as a form of "protection," regardless of how they feel about the group itself.

The arrest in late July of Division 30 fighters — the first contingent of a $500 million train-and-equip program authorized by the US Congress last year — and the subsequent attack on their headquarters by Jabhat al-Nusra, followed by US airstrikes on the local al-Qaeda affiliate, received a great deal of media attention.

The program is parallel to a covert one run by the CIA, but neither one has offered up anything close to the numbers required to have an effect.

Meanwhile, non-Islamist forces are forced to engage in alliances that are pragmatic, unclear and shifting by necessity.

Ahrar al-Sham spokesman Ahmad Qara Ali told Al-Monitor that if it were proven true that Jabhat al-Nusra was behind Radoon’s death, this would affect the group’s relationship with its ally "negatively."

A number of FSA commanders instead refused to comment, citing safety concerns inside and their precarious position across the border, given Turkey’s lack of clarity on Islamist groups.

Raslan simply echoed the words used by Radoon in an interview with Al-Monitor last year, that "the regime is the biggest criminal," and that he would not regret fighting alongside Jabhat al-Nusra and other groups with a similar ideological stance, regardless of what the future may hold.