Hama rebels struggle to hold ground as regime, IS attack

Opposition forces in Idlib and Hama are struggling to maintain some of their last positions, against which the Syrian regime and the Islamic State are escalating their attacks. 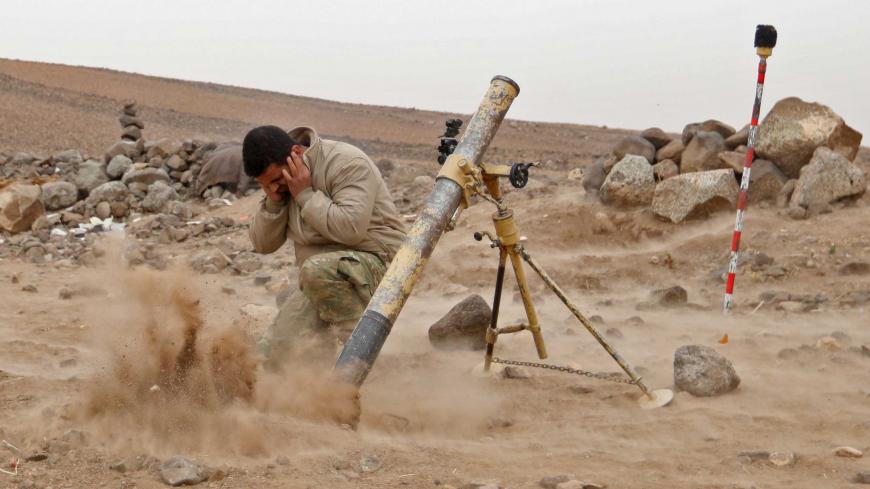 REYHANLI, Turkey — As the regime and remnants of the Islamic State (IS) both step up attacks on remaining opposition-held areas in northwestern Syria, rebel forces struggle to maintain their last bastion in the war-torn country.

Northern Hama and southern sections of Idlib just north of Hama have been pounded by artillery and airstrikes in recent days. Foreign militias seem to be playing a major role on the side of the Syrian government in the battles.

Regime and allied forces have reportedly retaken some 50 villages in the two provinces.

Remaining pockets of IS fighters in the area have also made inroads against rebel forces in recent months, leading several Hama residents, civil defense workers and the leader of an armed opposition group with whom Al-Monitor spoke to posit again that the Syrian regime “is supporting the extremists” to further its ends in the area.

Pro-regime media have announced “liberating all of rural Hama from [IS] militants after besieging them weeks beforehand,” only to later report on IS attacks on rebel groups in the same area.

Hayat Tahrir al-Sham (HTS) — the main part of which was formerly known as Jabhat al-Nusra prior to a rebranding in an attempt to formally distance itself from al-Qaeda — now has a major presence in southern Idlib and has control of sections of the “160-kilometer [99-mile] front line that opposition forces are holding against the regime and IS,” opposition group commander Raed Allawi told Al-Monitor during an interview in mid-December in southern Turkey.

Allawi leads the 314 Division, one of three sections of the Second Army (Jaish al-Thani) that have received support from the Turkey-based Military Operations Center (MOM).

Originally from rural Hama, Allawi has been fighting with various Free Syrian Army (FSA) groups since the beginning of the armed revolt. He has fought alongside such defected officers as Col. Jamil Radoon, who was assassinated in southern Turkey — possibly at the hands of al-Qaeda-linked Jabhat al-Nusra in late August 2015. Radoon was also from Hama province.

There are 1,318 fighters in the Second Army, Allawi said.

He told Al-Monitor that all the fighters in his group were receiving monthly salaries from the MOM of $150, but that this support would end after December. He said that talks were being held to possibly bring in a new program, but he did not seem optimistic about the support resuming soon, if at all. However, he said he would continue fighting no matter what.

Allawi expressed concerns that some of his fighters might be tempted or forced — due to financial considerations — to join HTS, since the group “has never had problems with funding,” unlike ones fighting under nonreligious-affiliated banners like his own.

He noted that the tribal element had thus far proved useful in keeping his division cohesive.

Allawi comes from the Smatiya tribe, which he said counts “61,000 people in rural Hama. All the members of this tribe support us, and all the fighters in my division are from this tribe.”

In Qalaat al-Madiq, for example, he said there are “no HTS units, only individuals that support it. But if any of these individuals were to cause trouble, the entire community would stand against them. It is a ‘family-based community’ with 25,000 people belonging to 11 families” in the Ghab Plains northeast of Hama.

Allawi’s 17-year-old son told him he would rather die than leave Syria, even to go to Turkey to renew an ID card. Allawi forced him to cross into the neighboring country briefly — “since we do not know what the future holds” — but the boy went back to Hama afterward.

Allawi has two wives, “as do many men in Hama,” and eight children.

The FSA division commander told Al-Monitor that about “80% of the defected officers in a camp set up by the Turks in the Hatay region are still involved in the fighting in one way or another,” lamenting that these officers have long been ignored or marginalized by the media as “part of a plan to make the uprising seem like a terrorists’ movement instead of a people’s one.”

Allawi said he had not had any major problems with HTS yet, but that all of the FSA groups in the area were wary of them.

“Before I joined the Second Army, we,” he said — referring to a previous armed opposition group he had been fighting with in the Hama region — “were holding a position [in Hama] in 2014, and Jabhat al-Nusra raided it and took the weapons. But at that time we were not getting international support.”

The city of Hama was where an estimated 20,000 people were killed in a 1982 massacre under current Syrian President Bashar al-Assad’s father, Hafez al-Assad. Due to a lack of documentation and no international media presence on the ground, exact figures are unknown. Opposition to the regime has long been strong in the province.

Khan Sheikhoun in southern Idlib has been targeted by the regime in recent days. The town became widely known after an April 2017 chemical mass casualty attack by regime forces that killed over 80 people and injured several hundred more. The attack prompted an international inquiry that found that the Syrian regime had used chemical weapons over two dozen times during the ongoing conflict, which began in 2011.

It also led to the United States' targeting a Syrian air base from which the aircraft that had conducted the chemical attacks had taken off.

Almost no international media have been inside Idlib or Hama since the closing of the Turkish border in early 2015, while the United Nations stopped counting casualties in the Syrian conflict over four years ago.

The international body’s last official figure — 100,000 dead and 1.7 million forced to take refuge in neighboring countries — dates back to July 2013.

Idlib is the only region in Syria left in rebel hands after a peak of territorial control by and international support for opposition groups in late 2012 and early 2013, when the National Coalition of Syrian Revolutionary and Opposition Forces took the Assad regime’s seat at an Arab League summit in Dubai, opened an embassy in Qatar in March 2013 and was recognized by the United States as the “legitimate representative of the Syrian people,” prior to losing ground over the ensuing years.

The province is where residents from many formerly besieged opposition-held areas, especially near the capital, as well as evacuees of besieged western Aleppo in late 2016 have been displaced to over the past two years.

The population of the province has risen to over an estimated 2 million people, almost half of whom are internally displaced persons.

FSA groups and HTS seem to be working more closely together on the front lines in recent days in an attempt to withstand the onslaught by the regime and allied militias.