Hayat Tahrir al-Sham leader Abu Mohammed al-Golani has recently visited the Jabal al-Zawiya area in Idlib upon an invitation by locals, to stress his organization’s ongoing support for the town. 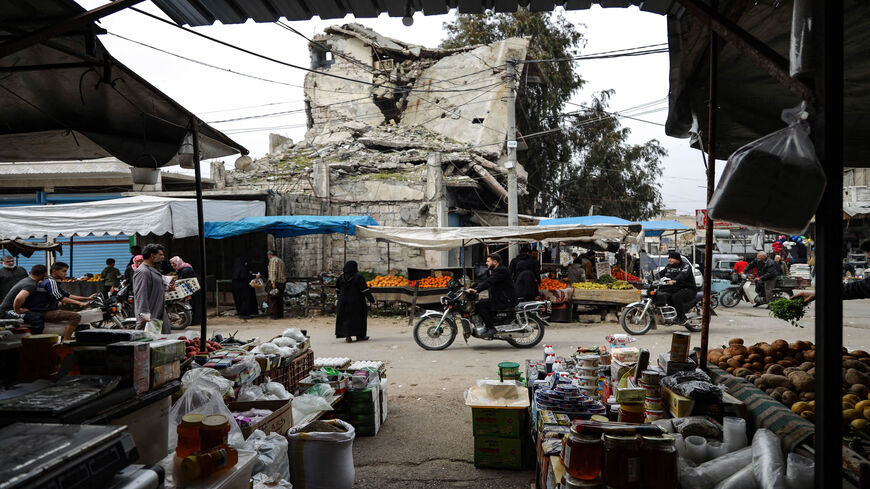 Syrians gather at a market as they prepare for the upcoming Muslim holy month of Ramadan, in the war-ravaged town of Ariha in the rebel-held northwestern Idlib province, Syria, March 31, 2022. - Mohammed al-Rifai/AFP via Getty Images

The leader of Hayat Tahrir al-Sham (HTS), Abu Mohammed al-Golani, has recently visited the town of Ariha, which lies on the key M4 highway in the southern countryside of Idlib in northwest Syria, and met with a number of local dignitaries in the town and its affiliated villages in the Jabal al-Zawiya area.

On March 24, Golani appeared in a video recording published by the HTS-affiliated Amjad Media Foundation, wearing an Arab cloak that was offered to him by the locals.

Golani is heard saying in the video that the visit came upon the invitation of the residents of Ariha and Jabal al-Zawiya.

He also highlighted the services that were implemented in the area, which is under HTS control, and noted that these services are the least that can be provided for the steadfastness of the residents of the Jabal al-Zawiya areas near the frontlines with the Syrian government forces.

Golani further asserted that the Jabal al-Zawiya and Ariha areas are no longer facing the risks of an attack by the Syrian regime. He praised the strength of the fighters on the frontlines, saying they are capable of defending the area.

“Survival and steadfastness require sacrifice, and without it how will we keep [controlling] the area?” Golani asked. “The battle today is in favor of the Syrian revolution, as our military force in the region has grown and became more organized. We have built large fortifications, especially in the Jabal al-Zawiya area,” he said.

In response to many of the attendees’ questions, Golani promised to fulfill their demands, which he described as rightful, but noted that they need further organization and sufficient time.

“The Syrian regime neglected the area,” when it was under its control before the opposition factions captured it in 2015, he said. "We started building roads and providing services such as sanitation, street lighting and so on.”

He stressed that without economic development, his government will not be able to meet the needs of the consumer sectors.

Golani also took note of the residents’ demands to direct the ministries to support the legal and religious institutions, and support the education and livestock sectors.

He has repeatedly said that the HTS-controlled areas need an economic recovery and infrastructure projects, reassuring residents that he is working on a strategic plan.

During his meeting with the locals, Golani explained that a strategy in the long term will bear fruits and that  institutions are built in an orderly manner. “We do not invent anything new. What distinguishes us is that we are building [our areas] amid the war,” he added, noting that he is working on building an infrastructure to create an appropriate investment climate in the area.

Brig. Gen. Ahmed Rahal, military and strategic analyst residing in Turkey, told Al-Monitor, “After he changed his jihadi approach and rid his organization of hard-line jihadis, Golani has been trying to portray himself to the world as leader of a moderate party that takes into account the interests of everyone in the region. He is reassuring the United States that he is not carrying out any actions outside Syria. He also tries to present himself to the Turks as being in full control of the situation in Idlib and sponsoring Turkey’s actions inside Syrian territory. When it comes to Syrians, Golani labels himself as the protector of the interests of the Syrian revolution.”

In turn, Abbas Sharifa, expert on radical Islamic groups and researcher at the Jusoor Center for Studies in Istanbul, told Al-Monitor, “Golani’s statements fall within the framework of his project in Idlib. He is reassuring the residents of the area and has started strengthening his military power and forging strong alliances with the Turkistan, Albanian and Chechen factions — all of which are jihadi factions that Golani is keeping close to better serve his project.”

He said, “Golani has also started attracting members of the Syrian National Front affiliated with the Free Syrian Army to his ranks, taking advantage of the financial hardships some of these members are facing. Despite the lack of any foregin support for HTS, Golani was able to develop his faction's combat capabilities and has secured drones to be used in suicide operations.”

He continued, “HTS does not benefit from the Russian war against Ukraine, rather the Syrian regime could exploit the repercussions of this war to mobilize its forces in the Kabina hills front in Latakia countryside. Meanwhile, HTS is giving top priority to economic projects and the establishment of industrial zones, not thinking of opening battles against the regime forces and their Russian ally.”

Meanwhile, Mohammed Omar, an activist close to HTS in Idlib, told Al-Monitor, “HTS has become a major player, today even more so than ever. It has upgraded its level of readiness and of course is now able to protect the areas [under its control] after drawing up several military defense plans. HTS now seems in its best positions in all respects, in terms of security, organization and economy, and it now has a more organized military institution.”

He noted, “HTS has not received any weapons from external parties, but it has greatly developed its combat capabilities, formulated new defensive plans and formed special forces for night confrontation. It also developed its sniper attacks, one of the most important attack methods at night. Not a day goes by without hearing of several regime members being shot by HTS snipers on the frontlines.”

Abu Khaled al-Halabi, military leader in HTS who resides in Idlib, told Al-Monitor, “HTS is now more ready to confront the regime forces and Russia. It is betting on Russia's preoccupation with the Ukraine war. It is also hoping to change the international opinion on it in order to be supported militarily to face Russia, which is fighting alongside the regime.”

He added, “HTS now has dozens of battalions that are well trained to fight in a guerrilla way. Many new battalions have recently been established for urban warfare and night combat. HTS has also set up a military academy to give professional combat lessons and training.”