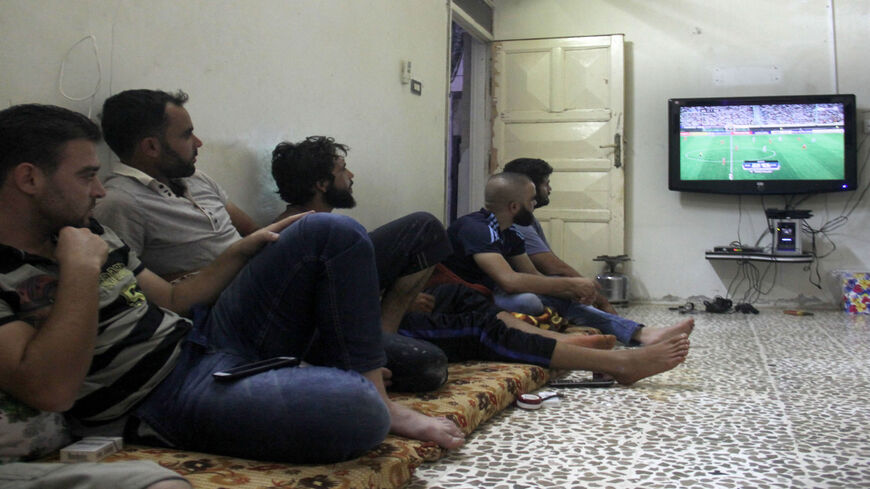 Syrian men watch the FIFA World Cup 2018 qualification soccer game between Iran and Syria, played in Tehran, in the rebel-held town of Binnish on the outskirts of Idlib, Syria, Sept. 5, 2017. - Omar Haj Kadour/AFP via Getty Images

ALEPPO, Syria — Hayat Tahrir al-Sham (HTS), which controls Syria’s northwestern province of Idlib, is paying great attention to sports activities, especially soccer, through the Syrian Football Federation affiliated with the Directorate of Sports and Youth in the HTS-affiliated Salvation Government.

The federation organized in late March a first-of-its-kind soccer league championship, in which fighters from HTS’ military wing took part.

However, HTS’ involvement in sports and the championship has sparked controversy among jihadis opposing the organization, who accused it of “wasting the blood of the mujahedeen” and distracting the fighters from their goals. Some even sarcastically called HTS’ military wing the "soccer wing,” joking that the soccer league was the best use of Russia's preoccupation with invading Ukraine.

The HTS-affiliated Idlib Radio said April 1 on its Telegram account, “The championship has ended and after the final the two teams met with the spectators to perform the group prayer in the stadium. Idlib is raising a generation on religious and moral principles, and competition without any personal grudges or sectarian and fanatic disputes; a generation brought up to obey God, be good jihadis, fight tyrants and strive for freedom and dignity.”

Abu Mohammed al-Halabi, an anti-HTS jihadist who resides in Idlib, told Al-Monitor, “There are almost daily deaths and injuries in the liberated areas, and HTS is holding a soccer league. When the villages and towns of Jabal al-Zawiya were being bombarded with artillery by the regime forces, Hamwi was watching a soccer game. He attended three consecutive games; that’s four to five hours at the stadium enjoying his time with his entourage.”

He said, “This seems to be a deliberate approach to distract the military wing from their goal, which is to liberate the land from oppressors. The HTS sheikhs and scholars approved this soccer league, arguing that such activities are a form of physical preparation for the battlefield. But what HTS is really doing is putting on a show for the West, to say that its fighters are [moderate] and have no problem having their thighs uncovered.”

Halabi noted, “Russia’s preoccupation with the invasion of Ukraine is a golden opportunity for the forces of the revolution in Idlib, and it should have been seized. Some attacks were carried out against the Russians and the regime forces, but unfortunately, the opposition and the Islamic factions are preoccupied with normalization with the regime and improving their image before the West by humiliating themselves and playing soccer.”

A source close to HTS in Idlib told Al-Monitor on condition of anonymity, “The extremist groups that criticize HTS’ military wing for organizing a soccer league for its fighters are hateful groups. The activities strengthen the bonds of brotherhood and love between the fighters and raise their physical fitness. It is a way for them to vent in the midst of the psychological pressure they are experiencing. Most of them are stationed on the battlefronts while the critics sit in front of their phone screens and make accusations here and there. Soccer is a popular game loved by all Syrians; many people watch and enjoy these games.”

Abu al-Alaa al-Shami, a jihadist who defected from HTS and goes by the alias “Inspiration and Thoughts” on Telegram, addressed Hamwi on his channel, saying, “ Oh, clown commander, Abu Mohammed al-Golani may have given you a bigger position than suits you. You are bad at your job, so you better make way for someone who is more fit for it. If you want, we can build you a soccer field for you to play in all the time.”

He said in another Telegram post, “We apologize, our heroic prisoners in Nusayri prisons. Golani and his entourage are busy with soccer.”

Orabi Abdel-Hay Orabi, a Syrian journalist specializing in Islamic and jihadi groups who resides in Turkey, told Al-Monitor, “HTS is now a powerful authority in Idlib and has its own project that the Salvation Government is working to establish. Sports activities and other cultural and religious activities that are in line with the local popular mood in Idlib serve its project. HTS is using such activities to get closer to the people and show that it belongs to this area and its fighters belong to this culture. It no longer is the same jihadi organization that had been classified as a terrorist group.”