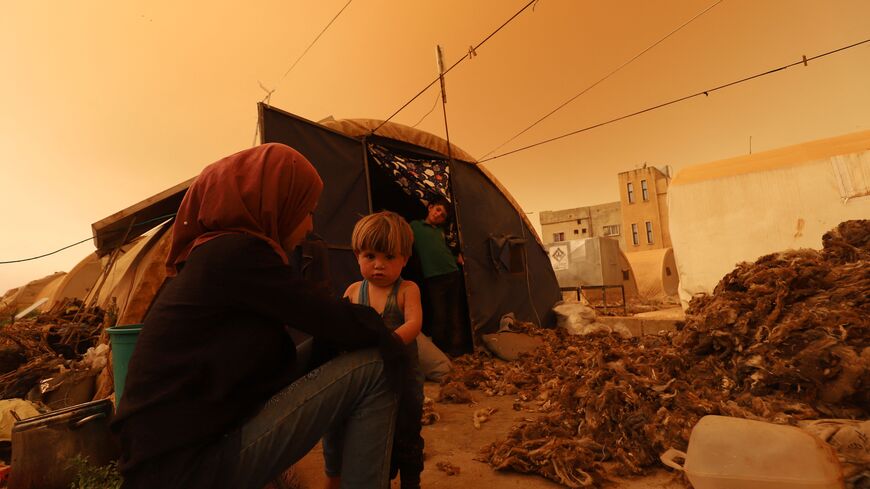 A displaced family sits next to their tent during a dust storm over the town of Zardana in the countryside of the northwestern Idlib province, Syria, June 2, 2022. - Abdulaziz Ketaz/AFP via Getty Images

ALEPPO, Syria — Hayat Tahrir Al-Sham (HTS), which controls Syria’s northwestern province of Idlib, held during the last week of May major combat military drills. The exercises were conducted in the various fighting fronts with the Bashar al-Assad government forces in Jabal al-Zawiya in the southern Idlib countryside, in the coastal mountains in the northern countryside of Latakia, in the eastern Idlib countryside and northwest of Aleppo.

Col. Mustafa Bakour, a military analyst who resides in Idlib, told Al-Monitor, “Military exercises usually aim to boost the readiness of the forces and assess their training level. They are also a show of force that aims to send warning messages to the enemy. There is no doubt that exercises have several benefits, most notably detecting weaknesses in training, equipment and qualifications. This helps to avoid shortages and address the weakness points before the start of any battle.”

On June 1, Amjad published a video recording titled “Zero Hour,” in which it highlighted part of the operations HTS conducted to raise combat readiness, military alert operations, readiness of the members of HTS’ armed formations and their participation in the maneuvers it conducted. The recording also showcased HTS’ possession of armored military vehicles, tanks and other conventional weapons.

Shami added, “As part of these plans, we conducted military exercises with the aim of raising the combat readiness of all our units, and boosting our monitoring and reconnaissance capacities and abilities to forecast gaps and problems that might occur during military operations. We held the exercises across all fronts in the liberated north, such as the fronts of Jabal al-Zawiya, the eastern countryside of Idlib, the coast [in Latakia countryside] and the western countryside of Aleppo. These exercises are part of our military wing’s periodic training plans.”

All the military brigades in HTS participated in the recent exercises, Shami said, adding, “The military wing command supervised the proper conduct of the exercises to improve the performance of the brigades and raise their military readiness in anticipation of any upcoming event or battle. We wanted to reassure our people in the liberated areas that we are ready and fully prepared.”

HTS first emerged in Syria at the end of 2012 under the name of Jabhat al-Nusra before it split from the al-Qaeda-affiliated organization in 2017. The group controls the greater part of Idlib province and part of the western countryside of Aleppo, Latakia countryside and Al-Ghab Plain in the northwest of Hama.

HTS was designated by the United States as a terrorist organization with the United Nations Security Council including it as a sanctioned entity linked to the Islamic State, al‑Qaeda, and associated individuals and groups. Meanwhile, Russia is invoking this as a pretext to justify its actions in northwestern Syria.

There are no accurate statistics about the number of fighters in each of these formations and the exact total number of HTS fighters remains unknown. HTS continues to recruit fighters in Idlib, taking advantage of the poverty and unemployment among Syrian youths in its areas of control. Sometimes, youths are being motivated to volunteer in HTS’ ranks through religious advocacy forums that encourage them to join the organization. HTS has a military academy to train its fighters, and new recruits in the academy undergo training as well.

A military official in HTS told Al-Monitor on condition of anonymity, “The cessation of battles means only one thing for us: It is an additional time for training and preparation for meeting the enemy again. The war is not over, and the upcoming rounds with the occupiers will be many.”

The official added, “HTS is intensifying its Sharia and military courses in order to benefit the most from the period of calm to train its fighters. Military training covers all kinds of weapons and types of modern battles, in parallel with religious training through Sharia courses and lessons to boost the fighter’s strength and resolve.”

The official pointed out that the military exercises also included day and night exercises as HTS attaches great importance to the tactics of night combat. He concluded, “These exercises come in light of major changes in the regional and global military situation, in light of the Russian war on Ukraine, which prompted Russia to withdraw many of its air and military forces from Syria. We have to prepare and be ready for any sudden field development.”