Hayat Tahrir al-Sham has announced the formation of three new brigades in what seems to be preparations for an upcoming battle in Syria's northwestern province of Idlib. 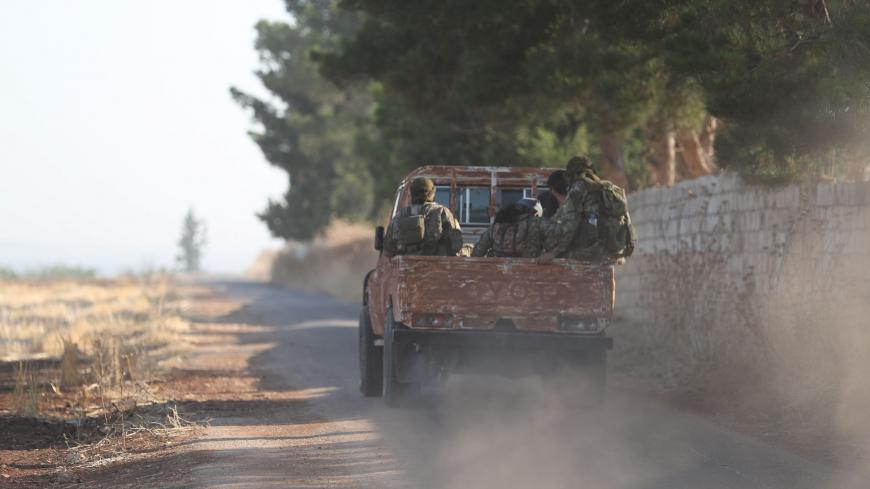 Fighters from the former al-Qaeda Syrian affiliate Hayat Tahrir al-Sham (HTS) drive through the village of Hamameyat on the border between Hama and Idlib provinces on July 11, 2019. O - MAR HAJ KADOUR/AFP via Getty Images

ALEPPO, Syria — Hayat Tahrir al-Sham (HTS) has been restructuring its ranks in northwestern Syria's Idlib, taking advantage of the cessation of hostilities and the relative calm that followed the cease-fire agreement signed between Russia and Turkey March 5.

HTS was designated as a terrorist organization by the United States and the UN Security Council in 2018 and international sanctions were imposed on the group.

It has made changes in the leadership of the armed formations, intensifying military training in camps scattered throughout the areas in northern Idlib. The group is working to attract more recruits exploiting the difficult living conditions in Idlib and unemployment among young people to attract new fighters.

Abu Hafs Binnish, who is from a city of the same name in Idlib’s countryside, is the most notorious among the appointed leaders of the newly formed brigades. Binnish is the son-in-law of HTS leader Mohammad al-Joulani, a connection that has allowed him to take up leadership positions in the extremist group.

Abu Bakr Muhain and Abu Mohammad Shura are members of the group's Shura Council and also Joulani’s cronies, but are less known than their associate since they are from outside Idlib and out of the spotlight.

HTS leaders called the decision to create new brigades “a step of paramount importance for pumping new blood into the group.”

It went on, “These changes are in line with the preparations of the revolutionary forces on the ground for the upcoming stage, which requires the mobilization of all forces and armies to rise to the challenges of the revolution and defend the region against the attacks of the occupier and its militias.”

Mahmood Talha, a journalist based in the Aleppo countryside and works with the local opposition network Thiqa News Agency, told Al-Monitor, “Should the cease-fire remain in place in Idlib, these changes would … diminish the role of the more hard-line groups within HTS that are dissatisfied with the Russian-Turkish agreement and want the battles to resume in Idlib.”

HTS is already suffering major defections from its ranks and poor military performance, evident during the recent battles against the Syrian government forces at the beginning of 2020. In an interview with a journalist close to the group in mid-February, Joulani said that his group still needs more organization.

Hussein Nasser, a former correspondent for the Turkish Anadolu Agency, told Al-Monitor, “HTS is trying to take advantage of the calm resulting from the cease-fire in Idlib to make changes in preparation for the upcoming period and to pump new blood into its ranks with new recruits after the heavy losses it incurred in battles with the regime’s forces and the Russian airstrikes.”

Nasser added, “The group began appointing local leaders and removing those who are considered extremists in the international arena, especially non-Syrian leaders. The newly formed brigades are all headed by Syrian commanders within the group. This is, of course, another of HTS’ schemes since its inception in 2012 to be removed from the list of terrorist organizations.”

An opposition military source who asked not to be named told Al-Monitor, “The announcement of the new military formations is merely a show of strength and an attempt to convey a message to the Turkey-backed forces that HTS continues to expand and still has what it takes to defend its presence in Idlib.”

“Increasing the number of brigades is important in light of the defections within the group and the power imbalance between its military formations. It is also very important to have as many leaders that are close to Joulani as possible,” the source concluded.