Hayat Tahrir al-Sham, a coalition of Islamist groups fighting against regime forces in Idlib, Syria, is facing dissent within its ranks and accusations of corruption by one of its own leaders. 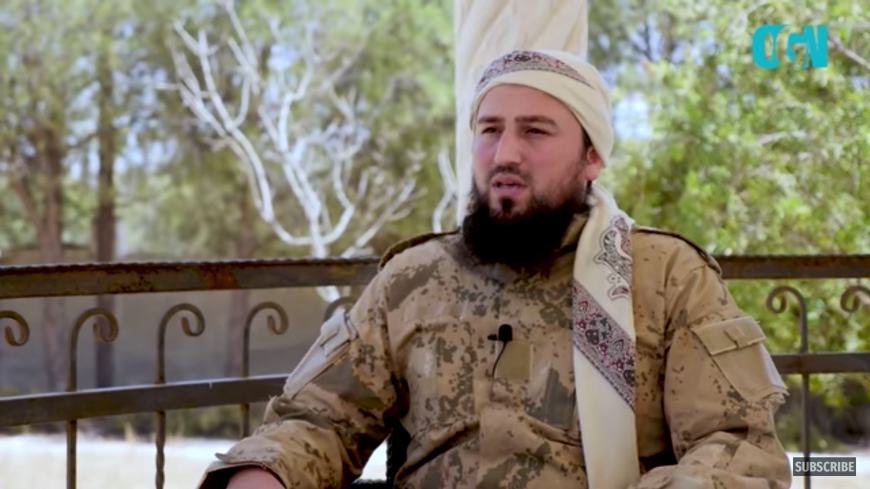 ALEPPO, Syria — A prominent commander of Islamist coalition Hayat Tahrir al-Sham (HTS) in Syria was arrested Sept. 12 after he posted a video on YouTube criticizing other HTS leaders and alleging corruption.

In his video, titled “To Prevent the Ship From Sinking," Abu al-Abd Ashidaa raised allegations of financial and administrative corruption within the group's leadership. Some observers described Ashidaa’s criticisms as a coup against HTS. The video went viral among jihadi organizations in the northwestern Syria province of Idlib, where HTS is fighting regime forces.

“HTS was designed to create a strong Islamic entity that defends Islam and Muslims through the internal decisions it makes. The three-year HTS experience has been a failure,” Ashidaa said in the video.

He said HTS leadership has been unable to defend Idlib despite the sacrifices of its soldiers. He argued that the recent battles in the northern province of Hama, and at Khan Sheikhoun in southern Idlib — which the Syrian regime took control of recently — are examples of this failure to manage battles and defend opposition areas.

“HTS is no longer a project of a nation, a group or a current. Instead, some people took it over like tyrants and turned it into a field for their personal [ambitions], marginalizing anyone who opposes them,” Ashidaa said. “HTS has become a private emirate controlled by friends, relatives and in-laws of leaders, [and they] make some of the most important security, legal and economic decisions. Meanwhile, competent experts are marginalized and HTS has lost its popular base.”

He also went as far as accusing HTS leadership of focusing on collecting tax and zakat (Islamic charitable contributions) and taking over public property, all while smuggling goods and monopolizing the trade of grains and agricultural crops after forcing farmers to sell their crops at low prices.

HTS denied Ashidaa's allegations and announced Sept. 10, the day after he posted the video, that he was being dismissed from his posts and referred to the military judiciary for punishment.

When he was arrested Sept. 12, HTS said in a statement, “A few days ago, a video by Ashidaa was broadcast, filled with lies and slander, and inciting division within the group. Some information that could benefit our enemy in the battles in the liberated north was revealed.”

The statement continued, “We stress that we will not allow, God willing, any attempt to divide our ranks or create strife, especially as the enemy is trying to infiltrate [our] ranks and seeks to pull them away from their families, waging a psychological war of incitement and spreading rumors.”

Ashidaa remained in custody as of the Sept. 17 deadline for this story, with no news of his release.

Until he was arrested, Ashidaa commanded the military bloc of Aleppo city and was administrative commander of Umar ibn al-Khattab Army, a group of HTS special forces. He is seen as part of the most radical HTS current. He opposes the pragmatism of HTS leader Abu Mohammad al-Golani and his moderate current. Ashidaa has also repeatedly condemned the conflicts over power within HTS, and the attempts of some of the group’s leaders to collect money.

HTS fears the video could lead to more defections. Since the beginning of this year, two of the group’s most prominent leaders defected or were dismissed — explanations vary — due to internal disputes: Talha al-Mayssir (also known as Abu Shuaib al-Masri) and Abu al-Yaqdhan al-Masri.

Hurras al-Din, a group affiliated with al-Qaeda, could benefit the most from internal HTS conflicts, as Ashidaa and other leaders who oppose Golani's more moderate policies could join its ranks. Mustafa Sejari, director of the political bureau of the Mutasim Division, a Free Syrian Army faction, told Al-Monitor, “Ashidaa’s coup against the HTS leadership shows his inclination toward the group's radical current, which is close to Hurras al-Din. His statements pave the way for division and come as a prelude to confronting the HTS leadership, aggravating disputes and dividing influence and local resources in Idlib.”

The state of resentment against HTS leadership in Idlib's jihadi and popular quarters became even more acute when the group failed to successfully confront regime forces in the recent battles in northern Hama. On Sept. 3, several protests against HTS were held across the cities and towns of Idib’s countryside. Protesters also accused HTS of stealing money and imposing restrictions on civilians. They even suggested Russia could be using the pretext of fighting HTS to continue bombing Idlib.

The popular protests seek to pressure HTS members and opposition leaders in Idlib to come forward and reveal violations and corruption, monopoly of trade and resources, and a policy of impoverishment.

And, on Sept. 13, HTS did issue a statement admitting it had made some mistakes and saying it was taking steps to fix them. It announced its decision to form a supreme monitoring committee to follow up on corruption reports within its ranks.

Activist Hussein Nasser told Al-Monitor, “Ashidaa's controversial statements came at a sensitive time in Idlib province, amid anticipation of regime forces resuming military operations or reaching a solution for a definite cease-fire. His statements will inevitably disrupt HTS ranks and could lead to new defections in light of the regime's [ground advances], especially since Ashidaa focused in his video on HTS failures in terms of defense and fortification.”

An HTS military commander spoke with Al-Monitor about the situation on condition of anonymity.

“HTS is facing a fierce campaign to eliminate it," he said, referring to ongoing Russian pressure on Turkey to rid the Idlib area of all but the most moderate opposition groups. "Ashidaa contributed to spreading rumors and we will not allow this.”