Hayat Tahrir al-Sham, which controls Idlib, is refusing to sit down with al-Qaeda-affiliated Hurras al-Din leaders to resolve pending disputes. 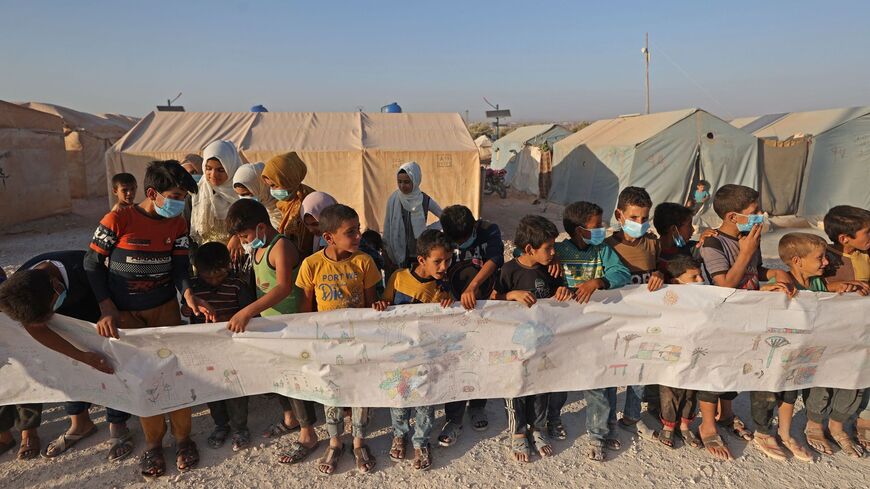 Syrian children hold a paper roll with their drawings and messages during an event organized by the Shafak NGO marking the International Day of Peace at a camp for internally displaced people in Syria's northwestern Idlib province on Sept. 21, 2021. - OMAR HAJ KADOUR/AFP via Getty Images

“A year into the unjust and aggressive arrest of a group of our Mujahideen brothers and students on the part of the HTS leadership, and after the harassment and injustice that our detained brothers have been subjected to over the course of this year, we had to make this statement,” Hurras al-Din leader Abu Humam al-Shami said in a statement released on Sept. 15.

He added, “We call on the HTS leadership to resort to Sharia arbitration. ... Should HTS refuse to do so, then we ask for an independent judiciary that both parties agree on to look into the condition of our prisoners, resolve the differences, settle the status of properties and assets they confiscated, and [stop] the ongoing arrests against the Mujahideen.”

Qahtani said in a statement, “People who take decisions on a whim keep raising oppression and Sharia arbitration slogans, also on a whim.”

Wais said on Twitter, “The real Sharia arbitration goes through adherence to the provisions of Islamic Sharia and through closing ranks away from any strife within the military and administrative authorities. Such arbitration proceeds with what the vast majority of the Mujahideen and dignitaries [agree upon] and with the Islamic project.”

He added, “Sharia arbitration shall not be resorted to in a bid to solve problems under the claim of alleged rights and false wrongdoing, which does not differ from the claims of hypocrites who resort to the Sharia when they think that it serves their whims.”

Several Idlib-based jihadists opposing HTS criticized Qahtani’s and Wais’ rebuffs. They believe HTS intends to carry on its war and restrictions against Hurras al-Din in Idlib until it is completely eliminated while promoting itself as an open organization that fights groups that are internationally classified as terrorist.

On Sept. 21, Shami issued a second statement directed at HTS saying, “I was hoping to receive a positive response, but I was surprised by the responses that were issued by front-row HTS leaders and their media pages bearing pride in sin while deviating from submission to a neutral Sharia judiciary.”

A jihadist source close to Hurras al-Din in Idlib told Al-Monitor on condition of anonymity, “HTS is carrying on its security campaign in search of Hurras al-Din leaders and members in Idlib. The security apparatus of HTS has beefed up its security checkpoints on the main and secondary roads located at the heart of the city and its countryside.”

The source added, “HTS arrested a few days ago [Sept. 17] Osama al-Karar, a Hurras al-Din leader, during a raid that targeted his house in Idlib city. Members of the security apparatus detained Karar and beat him up out of nowhere then took him to a prison near the Bab al-Hawa crossing, [in the] north of Idlib.”

The On The Ground News network (OGN) reported via its Telegram on Sept. 13 that a number of Hurras al-Din members and leaders detained by HTS went on hunger strike because they have not appeared before any courts.

“They went on strike because they have been imprisoned for more than a year now without trial and without a lawyer representing them, and there is consequently no chance for their release, added OGN,  run by American journalist Darrell Phelps, better known as Bilal Abdel Karim. "Those who went on strike are Abu Abdul Rahman al-Makki, Abu Baseer al-Diri, Abu Hamza al-Daraawi, Abu Abdullah al-Suri, Abu Musab al-Turki and Khallad al-Jawfi.”

Tension between HTS and Hurras al-Din has recently increased after al-Qaeda leader Ayman al-Zawahiri praised in a Sept. 11 video an attack carried out by Hurras al-Din against a Russian base in Tal al-Saman in north Raqqa earlier this year.

HTS is interrogating Hurras al-Din leaders that it arrests to find the mastermind behind the operations carried out outside Hurras al-Din’s areas of control, a military source close to HTS told Al-Monitor on condition of anonymity. He added, "HTS is concerned about the new strategy of the organization and the support it received from al-Qaeda’s leadership. It considers this strategy a threat to the opposition areas in northwestern Syria, and fears that the regime and its allies will carry out reprisals against millions of Syrians in Idlib.”