Hayat Tahrir al-Sham , which controls Syria's northwestern province of Idlib, is waging a war against the jihadi Jundallah group, which it sees as an extremist organization that exposes the Islamic State’s ideology and harbors jihadists that HTS is chasing. 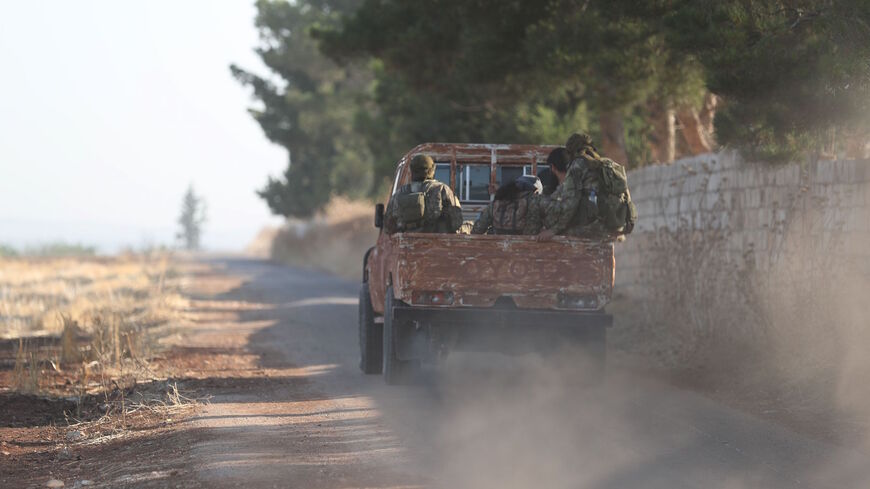 Fighters from the former al-Qaeda Syrian affiliate Hayat Tahrir al-Sham (HTS) drive through the village of Hamameyat on the border between Hama and Idlib provinces on July 11, 2019. - OMAR HAJ KADOUR/AFP via Getty Images

ALEPPO — Hayat Tahrir al-Sham (HTS), which controls Syria’s northwestern province of Idlib, is trying to seize the last pockets of opposing jihadist organizations in the Jabal al-Turkman area, east of Latakia province, and in the western part of Idlib. It launched a large-scale military operation against these groups on Oct. 25.

“The battle is still going on," an HTS military official, who declined to be named, told Al-Monitor. Since Oct. 25, he said, HTS has taken control of Tal al-Mashafa, Tal al-Abraj, Tal Abu Aref and Salour village.

The military operation mainly targets the Jundallah group, he said, in addition to other jihadist groups and new recruits, including former Islamic State members. "We found coins, which [IS] self-declared caliphate issued, in the military barracks and positions they forcibly withdrew from,” he said.

The jihadists are in strategic positions and showing strong resistance, setting booby traps and planting mines, the source said. But, he added, “Our military operations against Jundallah and its extremist allies claimed the lives of many of their members, including prominent leaders such as the general commander of Jundallah, Abu Khalil Azari, its communication officer Talhat Azari, as well as Anas Azari, Ammar Azari, Shueib Azari, and Abdel Azeem Azari.”

After HTS launched its military operation on the morning of Oct. 25, a clash was reported with Jund al-Sham, headed by Muslim al-Shishani, which is also present in Jabal al-Turkman and the western Idlib countryside. On the evening of Oct. 25, the two sides reached an agreement, brokered by the Turkestan Islamic Party, for the withdrawal of Shishani and his 70-member group from the area.

​​After the withdrawal, HTS continued its military operations against Jundallah, which captured a group of HTS fighters in the Jabal al-Turkman area and killed other HTS operatives during violent battles. This prompted HTS to send more military reinforcements on Oct. 26, tightening the noose and prompting several of Jundallah’s leaders and operatives to consider fleeing the area.

On the same day, HTS arrested some of the jihadists who tried to escape, including Abu Musa al-Shishani, Abdullah al-Binkisi al-Shishani, and Abu Abudllah al-Shishani, en route to Turkey.

Taqi al-Din al-Omar, head of HTS’ media office, told Al-Monitor that the campaign is directed "against Jundallah and jihadist takfiri groups allied with it, who are involved in security incidents and robberies, killing people and taking their money.”

The Jundallah group was founded by Abu Fatima al-Turki in 2015 in Idlib. Turki was killed nearly three years ago and was replaced by Abu Hanif al-Azari and his deputy Abu Jaber al-Azari. Abu al-Fidaa al-Jazaery took up the position of the group’s general legislator and Abu Abd al-Rahman al-Azari was responsible for communication. The group’s general military commander is Abu Khalil al-Azari. It includes a few Syrian operatives, in addition to various foreign nationalities.

HTS sees Jundallah as an extension of IS given that it also designates people as infidels, especially those who oppose them. HTS also accuses the group of sheltering IS cells that are carrying out bombings in Idlib. Also, Jundallah is mostly present in Jabal al-Turkman and in Jisr al-Shughur countryside in the west of Idlib — an area considered a safe haven for the al-Qaeda-affiliated Hurras al-Din’s leaders and members, who are being tracked down by HTS.

If HTS managed to completely eliminate Jundallah and get rid of the last jihadists’ enclave, it would also mean depriving IS and Hurras al-Din of their strongholds .

On Oct. 27, the Bab al-Hawa Square, north of Idlib, witnessed a sit-in against HTS’ military crackdown on jihadist organizations. Protesters chanted slogans calling for bringing down HTS leader Abu Mohammed al-Golani and demanded not to harm the organizations that include immigrants in their ranks.