Hayat Tahrir al-Sham managed to eliminate the jihadist Jundallah organization, forcing its operatives to hand over their weapons and take Sharia courses. 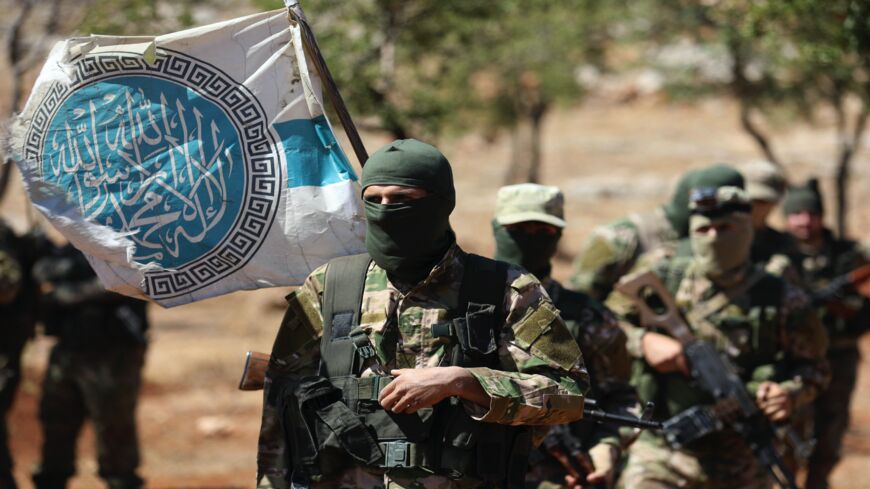 Syrian fighters attend a mock battle in anticipation of an attack by the regime on Idlib province and the surrounding countryside, during a graduation of new Hayat Tahrir al-Sham (HTS) members at a camp in the countryside of the northern Idlib province on Aug. 14, 2018. - OMAR HAJ KADOUR/AFP via Getty Images

According to the settlement that was announced Nov. 7 via Telegram, Jundallah’s operatives must hand over their personal weapons to HTS and undergo a Sharia training course under the supervision of the Turkistan Islamic Party (TIP). They will be allowed to live as civilians in HTS-controlled areas.

An official close to HTS who spoke on condition of anonymity told Al-Monitor, “HTS leadership decided to close the chapter on Jundallah by imposing a new settlement, forcing its operatives to hand over all their weapons and undergo mandatory Sharia courses to correct their Sharia perception in several matters, and point out the breaches they committed.”

“The organization’s members who fought HTS during its attack on their strongholds in Jabal al-Turkman area were granted amnesty and the public litigation against them was dropped. Those who face personal charges by civilians were referred to the Sharia judiciary to look into the different cases,” he added.

The source said, “The terms of the new settlement are already being implemented. Jundallah’s operatives surrendered all their weapons, and the Sharia courses have already been arranged for them and will last for several weeks. Upon completion of the courses, the organization’s members will have two choices: either join the ranks of fighting factions such as HTS or lead their lives as civilians.”

HTS had previously launched a military campaign against Jundallah in Jabal al-Turkman area in the northern countryside of Latakia at the end of October, which drove the organization out of the area after having concluded an agreement with HTS under the TIP auspices.

The first agreement on Oct. 29 between the two sides included the cessation of battles and Jundallah fighters’ evacuation from the Jabal al-Turkman area via closed trucks. They were allowed to hold on to their light personal weapons such as rifles, while their heavy arms were handed over to HTS.

The agreement also included the release of detainees on both sides, and the questioning and investigation of accused Jundallah members, placing them under house arrest at TIP military barracks until a comprehensive settlement is reached.

HTS appears to have managed to successfully eliminate Jundallah. The implementation of the last settlement agreement’s terms means dissolving the organization and forcing its members to abandon their extremist ideas according to HTS view, which classified the organization as takfiri.

HTS, for its part, is considered a terrorist group by the United States, Turkey and Russia.

Even after finishing the Sharia courses, Jundallah members will remain under HTS security control in a bid to prevent any attempts on their part to seek revenge by joining the Islamic State (IS) ranks, which carry out bombings and assassinations from time to time in Idlib.

A former member of Jundallah who is based in Idlib told Al-Monitor on condition of anonymity, “The organization’s members agreed to withdraw from their last pocket in the Jabal al-Turkman area and later to a settlement with HTS to stay alive. There are only about 50 members left. A big number of them were killed in HTS' major military campaign against them at the end of October.”

“HTS seemed serious in wanting to finish Jundallah, and it sought to do so through the large military buildup and an organized media campaign, accusing its members of being bandits and takfiris that are no different from IS fighters. This prompted many Jundallah members to realize that they lose their battle in the face of HTS,” he added.

“HTS insists on implementing the settlement agreement’s terms, especially in relation to the Sharia courses under TIP supervision, which is seen as close to HTS. But I don’t think that Jundallah’s members will give up the armed action and live as normal civilians. I think they will mostly join other factions, whether TIP or Answar al-Tawhid, both close to HTS," the source said.