The internal differences in Hayat Tahrir al-Sham push its most prominent leaders to defect, and a clash with al-Qaeda’s Guardians of Religion Organization may accelerate the defections. 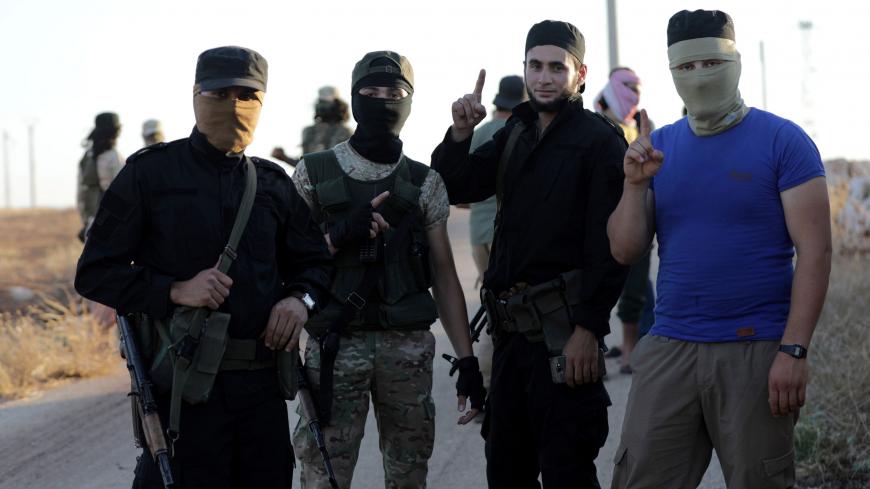 ALEPPO, Syria — On April 19, minor clashes broke out in the town of Armanaz in the northwestern countryside of Idlib between Hayat Tahrir al-Sham (HTS) and al-Qaeda’s Guardians of Religion Organization (GRO). The dispute arose between the two after HTS members tried to close the GRO headquarters in the town and expel its members from it.

The GRO accuses HTS of attempting to push its members out of the towns and cities of Idlib’s western and northern countryside, which is an area close to the Syrian-Turkish border. Tensions remain between the two sides, and may at any moment evolve into a broader military clash, despite calls by Abu Mohammed al-Sudani, a senior GRO leader, to negotiate and resolve the dispute peacefully.

It seems that what HTS fears in the event of a clash with the GRO is defections in its ranks, particularly from the more hard-line groups within HTS that do not see an interest in any confrontation with the GRO or any other jihadist organization in Idlib.

HTS was designated a terror organization by the United States and the UN Security Council in 2018. International sanctions have been imposed on the organization.

On April 7, Jamal Zainiyah, known as Abu Malik al-Telli, a senior HTS leader and a member of its Shura Council, defected from HTS and issued a statement on Telegram, explaining his actions. “I have decided to leave HTS due to my lack of knowledge of some of the group’s policies or my lack of conviction in them,” his statement read.

Zainiyah is considered one of the most hard-line HTS leaders, and he was the prince of Jabhat al-Nusra in the western Qalamoun area near the Lebanese border in Damascus countryside, before moving with his members to Idlib after he signed the Arsal Agreement with the Lebanese Hezbollah in August 2017.

Jabhat al-Nusra was established in 2012 as an affiliate to al-Qaeda in Syria. In 2016, it rebranded as Jabhat Fatah al-Sham before changing its name to Hayat Tahrir al-Sham in January 2017, as part of attempts to avoid being designated as a terror organization. HTS, however, maintains that it does not have links to al-Qaeda, and has tried to recast its image as a more mainstream Islamist opposition group in order to keep its hold on areas it controls in Idlib, were it imposes Islamic law.

The direct reason for Zainiyah’s defection is believed to be due to his objection to the decision of the HTS-affiliated so-called Syrian Salvation Government in Idlib, which was issued on April 3, to suspend the Friday prayer in Idlib in order to prevent the spread of the novel coronavirus.

Zainiyah said in an April 4 statement, “The Islamic nation was afflicted today by suspending the Friday [prayer] without controlling the markets [other gatherings] on the pretext of preventing the spread of the pandemic. Only when streets and markets are controlled and gatherings and sit-ins prevented, and fatwa jurists agree on the need to close mosques for a certain period for the sake of legitimacy, there is nothing wrong with [suspending Friday prayer].”

Mahmoud Talha, a journalist from the western countryside of Aleppo who works with Thiqa News Agency, told Al-Monitor, "[Zainiyah has] a large number of supporters in the HTS ranks, a large part of whom came with him from the western Qalamoun area in 2017, and they followed suit by defecting as well. No one knows their actual numbers.”

Talha added, “These defections are expected to increase in the coming period and include more radical figures. It seems that the reasons for Zainiyah’s defection are many, the most important of which are the differences within HTS, particularly in its leadership, and the main dispute is on the cease-fire agreement signed between Russia and Turkey on March 5. The hard-line current inside HTS, which includes Zainiyah, is dissatisfied with the agreement and wants the battles to resume.”

The Syrian regime forces had stepped up their attacks against HTS and Turkish-backed rebels in Iblib in recent months, before the cease-fire was reached.

Talha added, “Zainiyah had previously threatened to defect on several occasions after the leadership ignored his demands, the most important of which was to have an active role in the leadership’s general and internal policy and to join the close circle of HTS commander-in-chief Abu Mohammad al-Julani, i.e., be in direct knowledge of the various directions and supposed shifts pursued by HTS. He also demanded that he leads the security apparatus and solve the critical financial issue.”

Mohamad Rasheed, a journalist based in Idlib and working with local media outlets, told Al-Monitor, “Zainiyah has threatened to defect from HTS more than once during the past two years, and wanted to pledge allegiance to the GRO due to his differences with the HTS leadership, which has ignored Zainiyah since his arrival in Idlib in 2017 from the Qalamoun area. He was not given high-ranking positions, which bothered him and those close to him.”

Rasheed noted, “Zainiyah is one of the jihadist figures who are not satisfied with the pragmatic shifts HTS has taken. He opposes its attempt to turn from an extremist jihadist organization into a moderate Islamic organization, and naturally opposes making room for the Turkish army to expand its deployment in Idlib. Zainiyah’s positions are consistent with the GRO in terms of refusing to stop the fighting and obey the cease-fire.”

The differences within the HTS ranks seem serious and disputes revolve around the international Aleppo-Latakia M4 highway, the terms of the cease-fire agreement, the role of the Turkish army in Idlib and the future of armed opposition areas in Idlib in general if the cease-fire is long term. As per said agreement, radical organizations must withdraw from the safe zone between Tronba village in Saraqib and Tall Hawr in Jisr al-Shughur’s countryside.

On April 15, a video showed HTS members on the M4 highway threatening to behead Turkish soldiers, forcing the HTS leadership to issue a statement in Turkish on April 16 condemning the threats.

Defections also affected the HTS-affiliated administrative institutions in Idlib. On April 7, the head of the General Shura Council in Idlib, Bassam Sahyouni, announced his resignation for reasons that he did not specify. He played a major role in promoting the HTS administrative and political project in Idlib during 2018 and 2019. Sahyouni also attracted a large number of Syrian opposition figures, including academics and tribal elders and sheikhs, to participate in the local councils, the General Shura Council and the Syrian Salvation Government, which are all under the HTS umbrella in Idlib.