How HTS leader in Syria's Idlib is attempting a makeover

The leader of Hayat Tahrir al-Sham in Syria’s Idlib has been making appearances in the streets and public places among the people in a bid to present himself as a political leader. 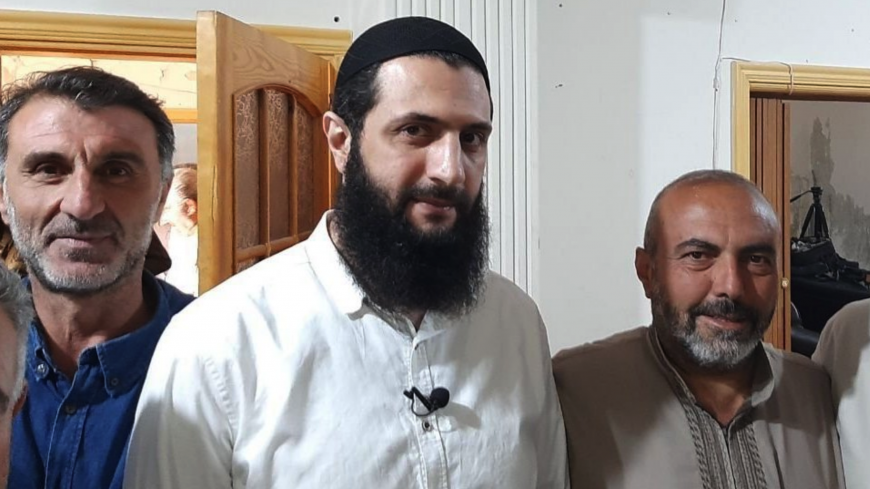 An undated image of Abu Mohammed al-Joulani (center) posted to Twitter on May 30, 2020. - TWITTER/SyriaDirect

Abu Mohammed al-Golani, leader of Hayat Tahrir al-Sham (HTS), which is designated as a foreign terrorist organization by the United States, the United Nations and others, has recently made several media appearances in Syria’s northwestern province of Idlib.

Since May, Golani has been seen in public places. He has been photographed alongside civilians, patients and tribal leaders, and has visited some residents of displaced camps in Sarmada and Harem.

Most recently, on the third day of Eid al-Adha, which fell on Aug. 2, Golani was seen serving food to customers in one of Idlib’s popular restaurants.

The photo sparked controversy among activists of the Syrian revolution on social media. Some Syrian tweeters said Golani was trying to present himself as a leader, touring the markets and checking up on people. They believe the photo was an attempt to increase his popularity.

Some made derisive comments about the photograph, while others believe Golani is doing the right thing, as this will bring him closer to the local community.

Zein al-Hamawi, an activist from the northern Aleppo countryside who is opposed to HTS, said that since his first public appearance, Golani has been seeking power and authority without adhering to a clear or consistent approach.

Hamawi told Al-Monitor, “This was evident since Golani split from the Islamic State (IS), pledging allegiance to al-Qaeda only to break from the latter to join a local faction until he merged with factions within HTS and imposed his control on all of them.”

Golani had announced in April 2013 his split from IS and joined al-Qaeda, but in July 2016 he defected from al-Qaeda and formed Jabhat Fatah al-Sham before he established Hayat Tahrir al-Sham in 2017.

“Following HTS’ control of Idlib, Golani began to assume the role of the leader of the governorate. In his frequent recent appearances, he tried to emulate the role of presidents and officials in their visits to their people, in a bid to present himself as an uncontested leader,” Hamawi said.

HTS seized the province of Idlib in early 2019 after defeating the Nour al-din al-Zenki Movement. It consequently formed the Syrian Salvation Government and banned any faction from interfering in the management of Idlib.

“HTS’ official media offices described Golani as ‘leader’ in the pictures and video footage showing his tours. This is something new. He is trying to get closer to the community and change their hateful view of HTS, its security apparatus and leader,” Hamawi said.

He added that the people of Idlib want to be freed from the HTS-affiliated government and security and viewed Golani’s tours and public appearances with cynicism and sarcasm. HTS has been leading a campaign of arrests against anyone who opposes it, including activists and supporters of rival factions.

Khalil al-Muqdad, a Syrian researcher at the opposition Orient News website, told Al-Monitor, “Golani wants to convey a message that he is a son of Syria and its revolution and that he does not fear to appear in public as HTS controls the area. He wants to show that he is following up on people’s hardships and concerns in the camps and cities and even with the tribes.”

Muqdad said, “HTS is not an oppressive faction. On the contrary, it is open to dialogue and to all parties. Golani also wants to convey that HTS enjoys the love and trust of the people who unanimously agree that it is capable of controlling the security situation and protecting the international highways, M4 and M5. These are messages to Turkey, Russia and Iran alike.”

Joint Russian-Turkish patrols have been ongoing on the strategic M4 highway linking the country's east and west under a cease-fire reached in March. Muqdad believes the patrols are conducted in coordination with HTS, which prevents civilians and armed factions from undermining their operation.

According to Muqdad, Turkey seems very satisfied with HTS’ policy.

“HTS was and is still in coordination with Turkey. In my opinion, the public relations campaign by Golani would not have taken place without the green light from Turkey, which is keen on keeping the de-escalation agreement in place and not disrupting traffic on the M4 and M5 highways,” he said.

Muqdad noted, “Golani is reassured that things are going the way he wants since the presence of jihadist groups in the area is a guarantee that he won’t be targeted as he is the right man to take control of the situation and the thousands of fighters. Should this happen, international and regional agreements and understandings might collapse, especially with the proliferation of weapons and the possibility of opening new fronts against [President Bashar] al-Assad’s regime and Russia.”

Mohammad al-Omar, a media activist close to HTS, told Al-Monitor, “Golani’s public appearances aim to reassure and get closer to the people and to prove to everyone that the people in Idlib are well and living normally. Golani presents himself as a strong leader and knows how to score points.”

Ahmad Hassan, a journalist from Idlib currently residing in Turkey, told Al-Monitor, “Golani believes that the next stage will be a shift from interim projects to stable projects,” referring to Golani’s ambition to lead a party that could play a role in Syrian politics in the future. “This is why he is trying to promote himself as a man with significant local influence. He is trying to convey a message that HTS is undergoing changes in its political project and is no longer a jihadist faction but is heading toward the Syrian political sphere. This message is to be conveyed at home and abroad.”

“There are, however, doubts about HTS and Golani’s ability to keep in check the fundamentalist factions within HTS and in line with his [political] project,” Hassan said.

Of note, Jusoor for Studies, a Syrian independent institution based in Turkey, conducted a study on the reasons behind Golani’s public appearances and concluded that HTS’ leader is trying to highlight his movement’s democratic characteristics.

“HTS wants to present its leader in a different light — different from the claims that Golani wants to remain hidden from his people and that he does not care about their concerns. HTS wants to promote Golani as a ‘leader’ in harmony with his people — a leader who visits camps and tries to offer help, guides and plays with children, and is close to the clans and tribes and is aware of their presence,” the report said.