Once more, the leader of Hayat Tahrir al-Sham in Syria’s Idlib is making appearances in public places and visiting camps in a bid to present himself as a popular leader and to have his organization’s name removed from the international terrorist list. 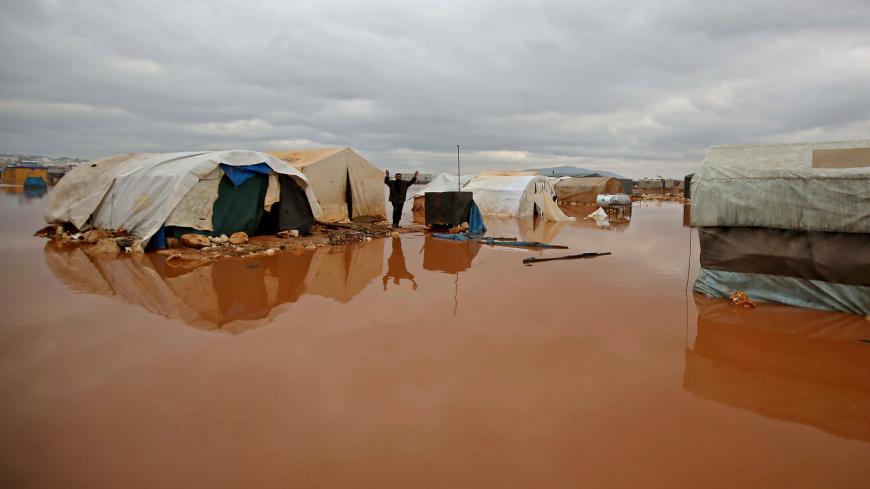 A Syrian man reacts as water floods tents at a camp for the internally displaced near the town of Kafr Lusin in the rebel-held northwestern province of Idlib, along the border with Turkey, Syria, Jan. 19, 2021. - Aaref Watad/AFP via Getty Images

ALEPPO, Syria — Abu Mohammed al-Golani, leader of Hayat Tahrir al-Sham (HTS), which is designated as a foreign terrorist organization by the United States, the United Nations and others, has recently made public appearances in Syria’s northwestern province of Idlib. On Jan. 23, he was seen touring the camps of internally displaced persons (IDPs) in Idlib and was photographed with camp officials, who complained to him about the damages done to their dwellings as a result of the rainstorms.

The frequent appearances of Golani in Idlib raises several questions as to HTS’ plans, and the message its leader is trying to convey.

On Dec. 19, 2020, Golani had visited a camp in the Idlib countryside, where he listened to the complaints of the IDPs. The visit came days following the US decision to designate HTS as “entities of particular concern” over its abuses of human rights, and less than a month after the US State Department announced Nov. 24 offering a financial reward of up to $10 million for information related to HTS’ leader.

Golani made several public appearances in 2020. In August, he was seen visiting an IDP camp in the town of Halfaya. In the same month, he toured the Jabal al-Zawiya area, south of Idlib, and on May 2, 2020, he visited a hospital in Idlib.

Back in December 2012, Washington placed Jabhat al-Nusra, the Syrian branch of al-Qaeda, on its terrorist list. In 2016, Jabhat al-Nusra announced its disengagement from al-Qaeda and changed its name to HTS, but this did not stop Michael Ratney, the US special envoy for Syria, to confirm on March 12, 2016, that Jabhat al-Nusra was a terrorist entity.

On May 15, 2017, Washington was still adamant to place the group on its terrorist list. At the time, the US State Department said that HTS was designated as a terrorist group, regardless of its names and the groups merging with it.

It appears that Golani is trying to be seen in a different light, presenting himself as a leader who caters to the needs of the people and who visits camps to offer help to the displaced. In his recent visits, Golani took advantage of the displaced persons’ needs for help after their camps were flooded by the heavy rains.

Some 224 camps were damaged due to the floods as a result of four rainstorms, according to the estimates of Syria's Response Coordination Group, which is a local organization operating in the Syrian opposition-held areas in northwestern Syria.

Golani is trying to present his group as a local jihadist organization that is well accepted by a large portion of the Syrian population, in a bid to have the group’s name removed from the international terrorist list.

Hisham Eskif, deputy head of the political bureau of Liwaa al-Salam (Peace Brigade) affiliated with the Free Syrian Army (FSA), told Al-Monitor, “The HTS leader is trying to promote himself as a popular leader, caring for Syrians and their revolution. He is also trying to present his group as part of the social, revolutionary and the displaced communities.”

He added, “He is sending a message that his organization is different from other fundamentalist jihadist groups. I believe that Syrians in Idlib realize that Golani is a chameleon who only runs after the interests of his organization and that his tours to the camps and meetings with people is nothing but a lame act."

Al-Farooq Abu Bakr, deputy commander of the FSA's Al-Motassem Brigade, told Al-Monitor, “HTS is presenting itself as a moderate group in order to reach settlements that would preserve its survival and presence in Idlib. It is making every effort to [present itself as] a reliable partner in any future political solution locally or at Syria’s level. Golani’s public appearances serve this end and clean up his image among Syrians in order to portray himself as a leader of a local organization who shares their aspirations and concerns.”

Abu Bakr added, “Golani’s strategic attempts to get closer to the people and to market himself as a popular leader will fail. No one will believe this deceitful man who has been the partner of the [Bashar al-] Assad regime in oppressing the revolution and waging wars on the FSA factions more than once during the past years."

Bilal Sattouf, a researcher in political science who is based in Azaz in the countryside of Aleppo, told Al-Monitor, “Since it has controlled most of Idlib and excluded the Islamic Ahrar al-Sham movement, HTS has been following a policy based on achieving stability and domination. It has taken a few steps to remain the largest factional force in Idlib.”

He noted, “This was evident at several levels, such as its decision to share power with other groups that are ostensibly independent but tacitly affiliated with HTS. This is not to mention the Syrian Salvation Government, which is portrayed as a civil government working on managing the Idlib areas and providing basic public services. It also provides HTS with a political cover at the regional level at least. The existence of the Salvation Government thus prevents the emergence of any other executive and administrative body that is not approved by HTS in Idlib.”

According to Sattouf, HTS is trying to become closer with the largest segments of Syrians living in the areas under its control, by forming local councils in every town and village.

“These councils manage the areas and make sure to control the situation so as to prevent the emergence of any group that would oppose HTS’ policies. This is done through intimidation practices. HTS is also trying to interact with the people by presenting its leader as the sponsor of Syrian interests, who follows up on the suffering and hardships of Syrians, to demolish the psychological barrier between HTS and the people in Idlib by playing on solidarity sentiments with the residents,” he said.

Satlouf concluded, “This is why we see Golani making a [public] appearance with every occasion or event. He wants to be [seen as] the leader who is close to his people and who stands with them in their sorrows and their joys, in a bid to increase his popularity and draw more members to his organization."