'Guardians of Religion' extremist group under siege in Syria's Idlib

The Guardians of Religion Organization, which has close ties to al-Qaeda in Syria, is under pressure from US drone strikes and a possible assault by Russian-backed Syrian forces. 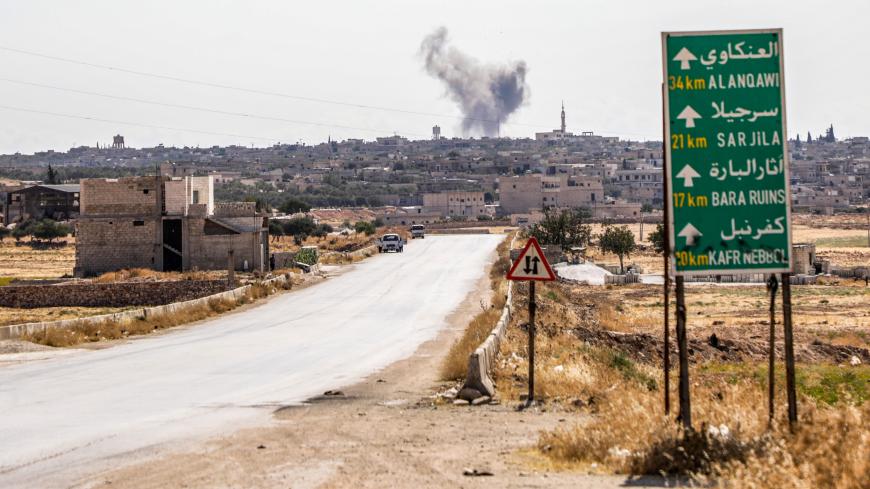 In June 2019, the US Department of Defense announced that one of its drones had targeted a building in southern Aleppo where some top figures in the GRO and other factions were meeting, killing two prominent leaders of the GRO.

On Aug. 31, 2019, the United States targeted a training camp used by both the GRO and Ansar al-Tawhid (affiliated with al-Qaeda), killing of a prominent leader of Ansar al-Tawhid, a Libyan nicknamed Abu Osama al-Libi.

On Sept. 10, 2019, the United States included the GRO and one of its founders, Samir Hijazi, on its terrorist list.

On June 14, 2020, US strikes killed Arouri, one of the organization's co-founders and its military commander. He was close to al-Qaeda's leader in Iraq, Abu Masaan al-Zarqawi, who was killed in 2006. Arouri came to Syria in 2015 and became a leader of Jabhat al-Nusra after it split from al-Qaeda. Also killed in the same strike was Bilal al-Sanaani, who was the commander of a unit within the group called the "Desert Army."

The latest strikes by the US-led coalition against the GRO on Sept. 14 in Idlib killed a prominent leader known as Sayyaf al-Tunisi.

Hussein added, “It appears that the HTS is completely fine with the coalition's assassinations of al-Qaeda leaders, which paves the way for HTS — which is essentially a branch of al-Qaeda — to appear as a moderate Islamic resistance [current] that does not bear any hostility to those who killed hundreds of civilians in Deir ez-Zor and Baghouz,” in reference to the US strikes against the Islamic State in March 2019.

Qais al-Ahmad, nicknamed Zein al-Hamwi, is an activist from the northern Hama countryside. He told Al-Monitor, “Drones did not only target the GRO but also jihadist figures wanted by the coalition, be it members of the GRO, independent individuals or trainers in camps, most of whom are non-Syrian immigrants who were previously in other jihadist fields such as Iraq and Afghanistan,” referring to some of the US-led coalition operations that killed Jabhat al-Nusra figures Abu Omar Saraqib and Abu Firas al-Suri in the summer of 2016, in addition to the strikes that targeted the Khursaniyah Brigade in the village of Ras al-Hosn near the border with Turkey in 2014.

Ahmad added, “Meanwhile, many jihadists accused HTS or its figures of having something to do with those assassinations.”

In a June 24 tweet, former Jabhat al-Nusra leader Saleh Abu Muhammad al-Hamawi, or Asseraaalsham, had hinted at the HTS helping out the coalition.

Ahmad continued, “We are not sure whether this is true or not, especially since most targeted figures were from Jabhat al-Nusra before it split from al-Qaeda, and the HTS leadership has detailed information about their whereabouts in Idlib, which it completely controls, and most of them have been in conflict with HTS recently.”

Ahmad noted, “The majority of those who were assassinated were important members, some of whom were trainers in the fighting camps with a very strong military ideology. I do not think that the GRO in its current form poses a threat to the United States, but the latter is trying to eliminate any jihadist ideology.”

A jihadist leader close to GRO who goes by Khattab al-Suri and resides in Idlib told Al-Monitor that GRO and HTS are enemies of Syrian President Bashar al-Assad and Iran, not the West.

“The GRO never threatened US interests, nor did it take any action against the West in general and the US in particular," he said, adding, “I do not know what good killing GRO leaders does for the US, since this supports the Iranian presence in Syria, [as] the GRO members are fighting Iran without threatening US interests. Some accused the HTS of facilitating these operations, and such accusations are invalid. HTS is fighting Assad, Russia and Iran, and is allying with everyone who fights or helps in the war against Assad’s forces and his allies.”