Is Turkey ready to take on jihadis in Syria’s Idlib?

While Turkey and Russia seek to maintain a cease-fire in Idlib, the Syrian government and jihadi groups want to resume battles. 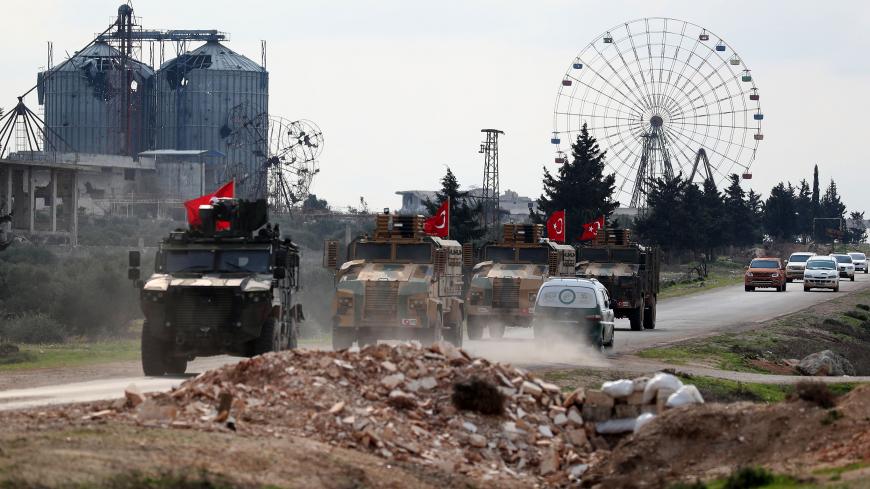 A Turkish military convoy drives along the M4 highway, which links the northern Syrian provinces of Aleppo and Latakia, near the village of al-Nayrab, about 14 kilometers southeast of Idlib city, Syria, March 25, 2020.

ALEPPO, Syria — Turkey has been seeking to secure the strategic flashpoint M4 highway connecting Aleppo and Latakia in southern Idlib in a bid to resume joint Russian-Turkish patrols, as per the cease-fire reached between Turkish President Recep Tayyip Erdogan and his Russian counterpart, Vladimir Putin, in Moscow on March 5.

The Turkish army has recently stepped up measures, mostly sending more military convoys, setting up new outposts on both sides of the road and conducting patrols in separate parts of the strategic highway.

The situation in the northwestern Syrian province of Idlib continues to be volatile. There have been mutual violations of the cease-fire between the opposition armed forces and the Syrian regime on the Idlib fronts. The contact points have been witnessing clashes and bombardments on both sides. The regime forces seem to be ready to engage in battles again, as heavy military reinforcements have been mobilized in Idlib with intensified airstrikes.

After being met by protesters blocking the road March 15, the Turkish army managed on March 24-25 to conduct two patrols on the M4 highway without any Russian forces.

The majority of the Turkish military convoys headed toward areas in southern Idlib, where they were deployed in strategic locations on both sides of M4 and in major cities such as Ariha.

The Turkish army is trying to keep extremist jihadi organizations at bay in order to resume joint patrols on the strategic highway.

Mohamad Rasheed, a journalist based in Idlib and working with local media outlets, told Al-Monitor, “The Turkish army seeks to secure the M4 highway by deploying more forces in the surrounding area in southern Idlib. Several outposts and military points were established on both sides of the road.”

On March 19, a Turkish patrol was directly targeted near the town of Muhambal on M4, killing two Turkish soldiers and wounding others. No armed group claimed responsibility for the incident, although a finger of accusation was pointed at Huras al-Din, which is affiliated with al-Qaeda and opposes the cease-fire in Idlib.

Following the incident, several military groups affiliated with the Free Syrian Army’s National Liberation Front as well as Hayat Tahrir al-Sham groups clashed with Huras al-Din militants and other extremist groups on the site, forcing the latter to pull back.

The targeting of a Turkish army military patrol by jihadi groups on the M4 highway is seen as a major challenge to the Turkish military that could lead to unexpected confrontations. It also raises questions about Turkey’s ability to carry out its commitment to the Russian-Turkish agreement to conduct joint patrols on the M4 highway.

Earlier on March 7, Huras al-Din commander Abu Himam al-Shami warned in a recorded speech against the “deceiving promises” of the international stakeholders.

The Believers Operations Room, established in October 2018, includes Jabhat Ansar al-Din, Ansar al-Tawhid, Ansar al-Islam and Huras a-Din, all of which are jihadi groups in Syria mostly based in the country’s rugged mountainous areas in southern Idlib and the northern Latakia countryside.

These groups were behind the bombing of the Kafr Bridge March 25, which is located on the M4 highway.

It appears Turkey is not alone in facing the challenge to maintain the cease-fire in Idlib. Russia is also struggling, as regime forces and Iranian-backed militias seek to resume military operations and continue to mobilize military reinforcements on the southern and eastern fronts of Idlib and in al-Ghab Plain.

It seems the visit by Russian Minister of Defense Sergei Shoigu to Syria on March 23 and his meeting with President Bashar al-Assad are part of efforts to maintain the cease-fire in Idlib.

According to Syrian presidential sources on social media, Shoigu visited Syria as the head of a military delegation to discuss the Idlib agreement between Russia and Turkey, focusing on the mechanism of implementation.

“The cease-fire agreement in Idlib is hanging by a thread. The jihadi groups rejecting the agreement have stepped up their efforts to prevent joint patrols on the M4 highway. These groups believe their gains are at stake if the cease-fire agreement remains in force, as they would lose vital sites south of the road and in the highlands in the northern Latakia countryside, which would fall under Russian control as per the agreement,” Mahmood Talha, a journalist based in Idlib working with Thiqa Agency, told Al-Monitor.

“On the other hand, the Syrian regime appears intent on ending the cease-fire, which is not in line with Iran’s interests. Tehran seeks to resume battles, with the Iranian Islamic Revolutionary Guard Corps deploying armed formations on the Idlib fronts, mainly the Lebanese Hezbollah and the Baqir Brigade,” Talha concluded.