The Syrian regime is intensifying its assault on Idlib and its countryside, where civilians are falling victim after fleeing death in Aleppo and other areas in Syria. 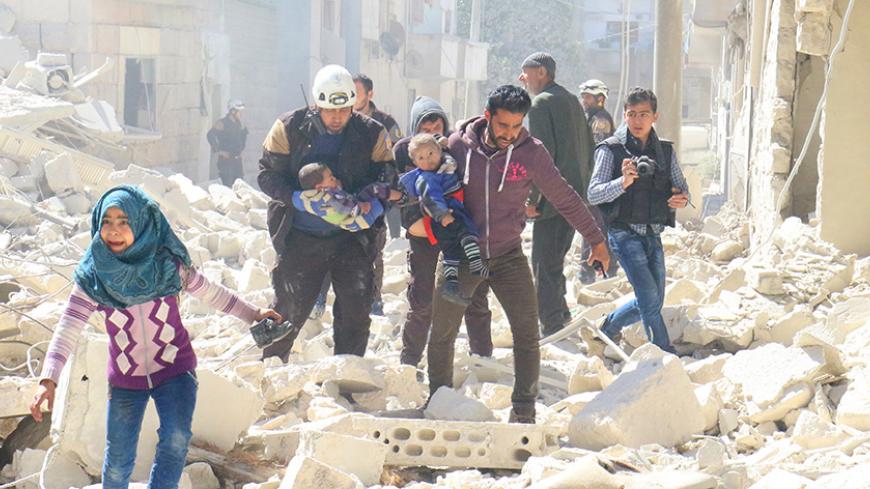 ALEPPO, Syria — Syrian regime warplanes are increasingly hovering in the sky over Idlib in northern Syria and targeting several residential areas inside the city.

Idlib is full of civilians, most of whom are from elsewhere in Idlib province, while others were displaced from various Syrian cities and villages. On March 20, regime warplanes targeted the city of Jisr al-Shughour in the western countryside of Idlib, killing eight people and injuring others while destroying several buildings. The warplanes also launched on the same day several air raids on the towns of Tarmanin and Ram Hamdan and the village of al-Dana in the northern countryside of Idlib, causing substantial material damage but no injuries.

On March 19, pro-regime warplanes targeted the Idlib center for the displaced (a school) and the Arbaeen Street district in the center of Idlib city, killing five people (three children and two women) and wounding 15 others, mostly women and children.

The latest regime air force escalation in Idlib province has given the civilians living there serious cause for concern. Idlib province is the last refuge for hundreds of thousands of Syrians who either hail from elsewhere in the province or were displaced from Syrian cities and villages that had been besieged by the regime forces until the Syrian opposition forces and the Syrian regime forces agreed to evacuate those areas and allow the people of those areas to head north toward Idlib province. This happened in the city of Aleppo in late December and at Wadi al-Bardi, in the Damascus countryside, on Jan. 31.

“This is what we were afraid of when we left Aleppo,” Abu Mohammed, a displaced person from Aleppo and current resident of Idlib who refused to reveal his full name, told Al-Monitor.

“When we were in Aleppo, air raids were a day and night occurrence, and we ultimately were besieged. We were subsequently forced to leave the city we were born in. We came to Idlib, which was relatively calm, but the air force is now constantly hovering in the sky over the city and its countryside, and we wake up almost every day to the sound of explosions caused by air raids. I think this is only the start for the city of Idlib. The Syrian regime will not stop until it turns the city and its countryside into rubble as it did in Aleppo, but the question that we ask ourselves every day is: Where will we go then? The border with Turkey is closed, and Idlib is the last city we can stay in. Returning to regime-controlled areas infers our inevitable death or imprisonment for a period of time that only God knows how long it would last. Our children would be forced to enlist in the army of the regime, and this is what we do not want.”

Civilians living in the city of Idlib believe that life in Syria has become hell on earth. Airstrikes could put hundreds of thousands of civilians living in the city and its countryside at risk. Ahmed Halabi, who was displaced from Aleppo and currently resides in Idlib, told Al-Monitor, “All I can say is that our lives are at stake. We have seen the casualties and destruction caused by such air raids in Aleppo, and I was one of the lucky ones who survived in that period, but the situation is a bit different here. There is nowhere else to go. We are living in hell. We have no jobs, no electricity, and water is constantly interrupted. And to top it all off, warplanes are pounding the area. Yes, there are local humanitarian organizations providing us with some food aid, but we need to feel safe first and foremost. If the escalation continues on Idlib, people will flee to farmlands and orchards away from populated areas, because the regime primarily targets civilians and destroys residential neighborhoods.”

In this context, media activist Mujahid Abu al-Joud told Al-Monitor, “It is clear that the regime is trying to replicate the Aleppo scenario in Idlib as it fails to abide by any cease-fire or any truce.”

He added, “There are several cease-fire agreements that were signed, but they all failed to hold, as the regime did not abide by any of them. In recent years, the regime destroyed the eastern neighborhoods of the city of Aleppo and eventually displaced their population. This is what it is seeking to achieve in Idlib under the pretext of ‘fighting terrorism,’ except it is not targeting those it labels as terrorists and is rather focusing on civilians and residential areas as the international community stands idly by, and this is catastrophic.”

“Aleppo was previously only home to 300 members of Jabhat al-Nusra and, under the pretext of fighting terrorism, the regime almost completely destroyed its eastern neighborhoods and killed thousands of civilians, and the same scenario will unfold in Idlib regardless of who controls it,” Joud said.

Joud added, “The Syrian regime does not understand the language of dialogue and does not believe in a political solution. Had it had faith in such a solution, the situation in the country would not have been as bad. The Syrian regime wants to settle the situation in its favor by all available means, even if this leads to the total destruction of Syria and the killing of hundreds of thousands more Syrians. It is benefiting from the Russian intervention, the Iranian support and the support of some militias while the international community settles for condemning and denouncing the massacres against the Syrians, whose only fault is residing in rebel-controlled areas.”

The biggest problem, however, is the lives of hundreds of thousands of Syrians living in Idlib, as these will not be able to find another shelter amid the ongoing airstrikes falling on the city and its suburbs. This same scenario occurred in areas now controlled by the Syrian regime forces such as the eastern neighborhoods of Aleppo.