Dozens of civilians were killed and wounded in Aleppo after the cease-fire failed and regime forces launched a fierce campaign to recapture the opposition-held neighborhoods in the city. 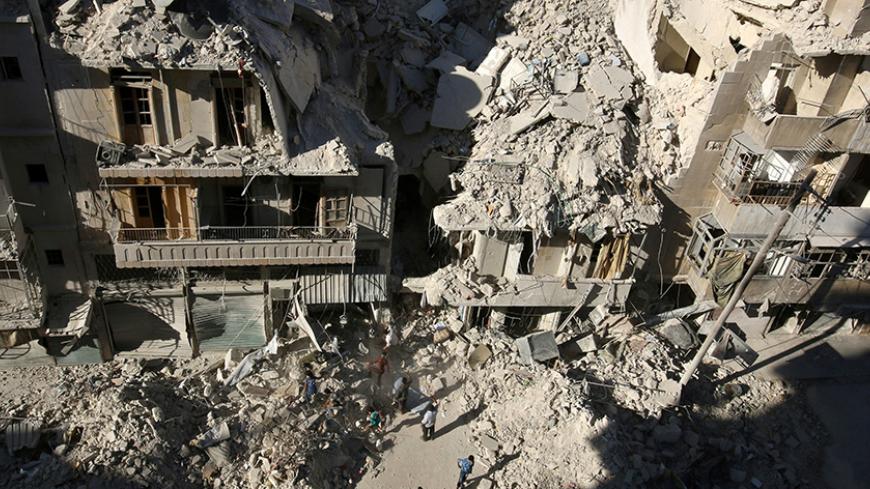 People dig in the rubble in an ongoing search for survivors at a site hit by an airstrike in the rebel-held Tareeq al-Bab neighborhood of Aleppo, Sept. 26, 2016. - REUTERS/Abdalrhman Ismail/File Photo

ALEPPO — The Syrian regime’s military airplanes and helicopters are intensely shelling the neighborhoods in Aleppo under the Syrian opposition’s control. On Sept. 28, the warplanes targeted a bakery in al-Maadi neighborhood, east of Aleppo, while people were gathering to buy bread. As a result, six people were killed and five others were wounded.

Al-Halak, Baidin, al-Sakhour, Sheikh Khadr, Masakin Hanano, Sheikh Fares, al-Haydariyat and al-Shakif neighborhoods were shelled on Sept. 30. Seven people were killed and others wounded — as of the time of this writing — while some still remain stuck under the rubble as residential buildings have been destroyed. This scene has been recurring since Sept. 19.

On Sept. 19, the Syrian regime announced its decision of noncompliance with the cease-fire reached under US-Russian brokerage and blamed the armed opposition factions for this collapse, as they had breached the truce 300 times, according to the regime.

For its part, the National Coalition of Syrian Revolutionary and Opposition Forces accused Russia and the regime forces of breaching the truce, especially after Russian and regime aircraft targeted an aid convoy of about 20 Red Crescent trucks as they were crossing Urum al-Kubra village in Aleppo’s western countryside. As a result, the convoy was destroyed, 12 people were killed and others were wounded, most of whom were Red Crescent staff, including Omar Barakat, the head of the agency in Urum al-Kubra.

The Syrian regime’s escalation against civilians in Aleppo coincides with the blockade the regime forces have been imposing on more than 250,000 civilians in opposition-held neighborhoods in Aleppo since Sept. 4.

Indications of a blockade have been clear in the city’s eastern neighborhoods whose markets looked empty of basic foodstuff, and the citizens were living on their stored food supplies, such as rice and bulgur.

Abdel Qader from al-Qaterji neighborhood told Al-Monitor, “Aleppo has turned into a death trap. The 1-month-old blockade on the city persists, while the air force and shelling, and the military helicopters continue to shell inhabited neighborhoods. My family and I survived death by a miracle. A missile from a military aircraft fell near our building in al-Qaterji neighborhood while we were in it. I felt it was the end. Everything was devastating, and the thump of the missile was deafening. The house started to collapse with splinters everywhere, and the balcony was destroyed on impact.”

He added, “I did not know what to do. I only heard the explosion and the wailing of my mother, sister and wife. Thank God we are all alive. My father’s leg was broken, and my nephew suffered mild head injuries. How long will this last? Don’t we deserve to live in peace and security like everyone else? Don’t our children have the right to a sense of security and go to school? I have young siblings and a 4-year-old daughter.”

In the wake of the regime forces’ escalation, hospitals in Aleppo were flooded with wounded people, amid the lack of medical staff due to the blockade on the city and the fact that most doctors are in Aleppo’s countryside, which is under the Syrian opposition’s control. What’s worse, the regime forces were targeting hospitals in the city intermittently.

In his speech before the representatives of 15 member states of the UN Security Council on Sept. 28, UN Secretary General Ban Ki-moon classified the attacks on Aleppo’s hospitals and the use of fatal weapons as “war crimes.”

In this vein, Aref al-Aref, an emergency room technician at a hospital in Aleppo, told Al-Monitor, “Ever since the regime forces announced noncompliance with the truce, the air raids on Aleppo’s neighborhoods have not stopped round-the-clock. The Syrian-Russian aircraft used everything from cluster bombs to phosphorus grenades and thermobaric bombs that cause mass destruction in the targeted region. Those were used in al-Kalasa and Tareeq al-Bab neighborhoods. Since Sept. 19, there have been more than 400 dead people and over 1,000 wounded. Hospitals and medical staff are under pressure due to the blockade on Aleppo. Unfortunately, many injuries need urgent surgical interventions. But due to the shortage of specialized doctors and the high number of wounded civilians, nothing can be done at the moment.”

He added, “We were aided by medical staff in Aleppo’s countryside and hospitals in the past. But now the situation is more complex, amid the blockade and daily wounded people flooding to the hospitals.”

The escalation on civilian areas in Aleppo was coupled with military escalation from regime forces on the city’s northern fronts. With the support of the Palestinian Al-Quds Brigades, the regime forces managed to control on Sept. 29 the Handarat camp, north of Aleppo, following violent battles with the Syrian opposition that lasted for several days and included heavy air raids from Syrian and Russian warplanes. Meanwhile, the regime is escalating its assault on Aleppo’s fronts to enter the city’s eastern neighborhoods to exploit its blockade on civilians and military officers.

Aleppo’s citizens are facing tough days. They are besieged until further notice, living under the mercy of military warplanes’ bombs. They are hoping for the return of security and safety, which they have been missing for more than four years, and they look with passion to the near future.