How are Aleppo's residents dealing with truce?

Although aid convoys have yet to enter Aleppo as part of the latest US-Russia brokered cease-fire, Syrians are still satisfied with the relative calm following the truce’s implementation. 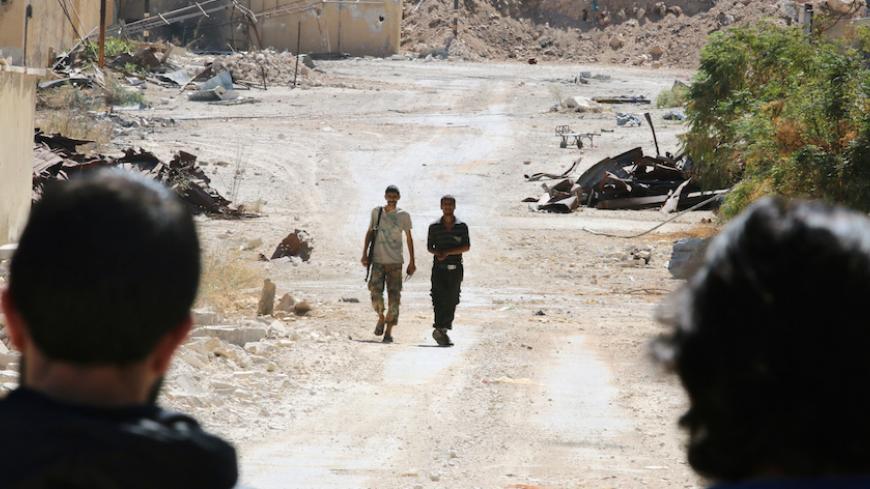 ALEPPO, Syria — The neighborhoods in Aleppo controlled by the Syrian opposition have been experiencing relative calm after the 48-hour truce approved by the United States and Russia took effect Sept. 12. As US Secretary of State John Kerry and Russian Foreign Minister Sergey Lavrov agreed to extend the cease-fire for another 48 hours on the night of Sept. 14, Gen. Viktor Poznikhir, the Russian army’s chief of staff, said in a press statement that Moscow supports the extension of the truce for another 48 hours.

Poznikhir described the truce as fragile and said that the fighting factions violated it 60 times in the past 48 hours. He noted that most violations were committed by Ahrar al-Sham.

It is noteworthy that the truce did not include the Islamic State (IS) and Jabhat Fatah al-Sham, even though they are present in Idlib and in the eastern and southern countryside of Aleppo.

After the truce took effect, the people in Aleppo went out to the streets without fear of being targeted by the Syrian regime’s planes and helicopters. Children filled Aleppo’s gardens to bid the warm weather farewell. They played without worrying about the shelling and without jeopardizing their lives.

However, the siege imposed by the regime in Aleppo since Sept. 4 is challenging the truce, as more than 300,000 people still suffer from the lack of food necessities such as vegetables. Also, the regime forces shelled a neighborhood east of Aleppo Sept. 14, leading to the injury of two people and damages to buildings.

Yet Haj Abu Ibrahim, a resident from Hay al-Trab in eastern Aleppo, told Al-Monitor, “We haven’t experienced this much peace since ages. There is no shelling, and I haven’t heard the ambulance siren for three days. I can now sit outside my house without fear. My grandkids can play in the backyard safely. We had been dreaming of this, and I hope the blockade will be lifted. I also hope this is the beginning of the end of the war, which destroyed most neighborhoods in Aleppo and caused the displacement of its citizens.”

On the military level, 21 large military factions in Syria, including the Sham Legion, Jaish al-Islam and the Nureddin Zengi Brigade, issued a statement Sept. 12 to express their disapproval of targeting Jabhat Fatah al-Sham, and they showed reservations about excluding the group from the truce. The statement further indicated that the US-Russian agreement did not involve foreign militias fighting with the regime.

The Islamic Ahrar al-Sham movement, which is considered among the largest in Syria, said in a statement issued Sept. 12 that excluding Jabhat Fatah al-Sham shows unacceptable dualism. Ahrar al-Sham asserted that targeting Jabhat Fatah al-Sham or any other faction fighting the Syrian regime will weaken the military force of the Syrian revolution and strengthen Syrian President Bashar al-Assad and his allies.

Despite these reservations, the factions asserted they would cooperate to allow the entry of humanitarian aid to civilians in Aleppo and reiterated their readiness to protect workers in humanitarian and international organizations.

Zakaria Malahfaji, a political representative of the Fastaqem Union, one of the fighting factions in Aleppo and its countryside that is affiliated with Fatah Halab (Conquest of Aleppo), told Al-Monitor, “As Free Syrian Army [FSA] factions, we have many reservations on the truce that was sponsored by the United States and Russia. The agreement did not include any sanction against the regime in case it fails to abide by the truce. The FSA factions also showed reservations on excluding Jabhat Fatah al-Sham from the truce, despite the ideological differences between the military factions and the movement. The FSA believes that Jabhat Fatah al-Sham has taken a positive step after breaking ties with al-Qaeda. Besides, Jabhat Fatah al-Sham has always fought alongside the FSA to confront the regime in past battles.”

He added, “We have welcomed the entry of humanitarian aid to civilians in Aleppo and other besieged areas although we are well-aware that the regime will impede any agreement that would serve civilians’ interests.”

The truce agreement sponsored by the United States and Russia stated that humanitarian aid must be allowed to reach civilians in Aleppo through Castello Road, north of Aleppo, which is under the regime’s control. But as of the time of this writing not one aid convoy has reached Aleppo.

In this context, Vladimir Savchenko, the head of the Russian Reconciliation Center in Syria, said at a press conference Sept. 15, “The Syrian army has started withdrawing its forces and vehicles from Castello Road.”

Pentagon spokesman Peter Cook said Sept. 15 that he has “no intelligence information or facts” showing that the Syrian army has started withdrawing from Castello Road, although this is an essential step to allow humanitarian supplies to reach east Aleppo.

Civilians in Aleppo hope to enjoy peace without the shelling that disrupted their daily lives. They wish a road would be opened to pump life back into the besieged city. It is still unclear whether the truce will hold, and everybody is waiting to see how things will unfold in the next few days.