Despite welcoming the US-Russia agreement on Syria, Iran never had much faith in the initiative. As such, the collapse of the deal does not appear to have left anyone in Tehran fazed. 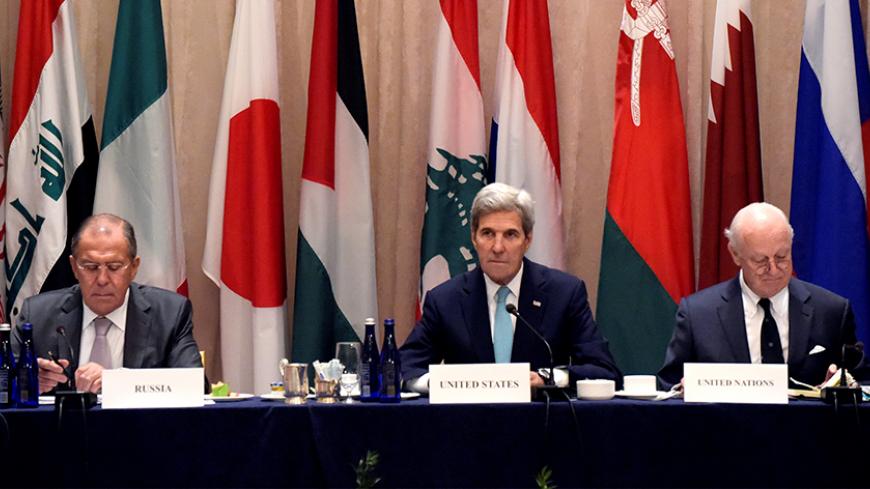 Many are the regional and international parties involved in the conflict in Syria, yet only two seem capable of making big decisions. On Sept. 10, Russia and the United States reached a tentative agreement for a cease-fire in Syria, imposing full adherence on all involved parties. However, the truce came to an end Sept. 19 as both Washington and Moscow exchanged allegations of noncompliance. Russia raised questions over the Sept. 17 American-led air raid that reportedly killed at least 62 Syrian soldiers in Deir Ez-Zor, suggesting that it might leave the whole peace process in tatters. Meanwhile, the United States held Russia fully responsible for the attack on a United Nations aid convoy near Aleppo by the Syrian air force Sept. 19.

There was much hope that Russia and the United States could show more compliance with the agreement to help move toward a new level of understanding — a milestone that might facilitate a comprehensive peace plan to end almost six bloody years of a conflict that has claimed the lives of hundreds of thousands and driven more than half of Syria’s population from their homes. Such a goal couldn’t be fulfilled without the help of two other main regional players, Iran and Turkey — both of which have military presences in Syria and strong influence on militants fighting on opposite sides of the conflict.

“There’s no reason to believe the Americans. It’s only because of our Russian ally that we are ready to cooperate,” an Iranian military source told Al-Monitor on condition of anonymity. “To secure this truce, there were men fighting and dying in Aleppo and they helped make it happen,” said the source. Iran’s official stance, as expressed by Foreign Ministry Spokesman Bahram Ghasemi, welcomed the US-Russia deal. On Sept. 11, Ghasemi told reporters in Tehran, “Iran has always welcomed a cease-fire in Syria and the facilitation of humanitarian access to all people in this country.” He added, “The cease-fire needs to be sustainable and enforceable, not providing the terrorists with any opportunity to beef up [their forces] and [re-equip].”

Iran is always cautious when dealing with these kinds of situations. Indeed, one previous experience was bloody enough to raise concerns. The Khan Touman battle on May 6, following the Feb. 27 cease-fire, saw dozens of soldiers fighting under Iranian command being ambushed, killed and some captured. Back then, Iranian officials thought that the cease-fire was “merely an opportunity for the recruitment and reinvigoration of the terrorist groups by the governments that support them.”

The Iranian military source who spoke to Al-Monitor stressed that his country isn’t ready to tolerate any similar incident, referring to the Sept. 17 US-led raid on the Syrian army. “For more than half an hour, the US planes were bombarding the Syrian army while Daesh [Islamic State (IS)] was advancing. Now what can we call this?” asked the Iranian military source. “Regrets won’t bring back the killed soldiers nor the lost positions. What if the Syrian army did a similar mistake? They’d call them war criminals. Still, this excuse [of a mistaken attack] is frail and implausible."

Al-Monitor received Sept. 11 a rare statement from the “Syria media warfare group” — the media wing of the Resistance Axis — quoting the “field commander for forces allied with Syria,” remarking on the Sept. 10 announcement of an impending truce. The statement read, “The Syrian army and its allies will continue their open war on takfiri terrorists of [IS] and JFS,” calling on the armed opposition to rethink its political calculations and military bets. “The Russians and the Americans should make sure all parties are committed to the agreement, yet any violation won’t be tolerated and we’ll respond with the maximum power possible,” the statement read, concluding, “The US-Russian-Turkish-Iranian understanding will uproot the hopes of the terrorists after it was agreed on closing the Turkish borders.”

On Sept. 17, an Iranian diplomatic source told Al-Monitor that the new truce seemed to be promising, but that “the latest raid by the US on the Syrian soldiers makes things more complicated.” Another Iranian official who spoke to Al-Monitor on condition of anonymity said, “If the US wants others to be committed to the agreement, then they themselves have to commit. The Russians consulted us on the truce, and we had one main concern: The Americans never stick to their word.” The Iranian official explained that the only reason his country’s allies agreed to the truce was for humanitarian reasons. “Why would we accept a cease-fire when we are advancing and the other side is retreating? It is only because we want to contribute to peace efforts. The only real war taking place is in Aleppo; in the south, there’s nothing serious going on. In the countryside of Damascus, agreements are reached with the militants and they are leaving. In Homs, the situation is good; in Hama, the situation was contained. They [militants] have Idlib, and Aleppo is contested.”

Indeed, the level of optimism in Tehran over Syria has fallen drastically over the past 48 hours. A second Iranian military source who spoke to Al-Monitor on condition of anonymity said that given the latest developments, “It’s obvious that the US isn’t serious about ending the crisis. ... They say the [Sept. 17] attack on the Syrian army was a mistake. Having been a military officer for years, I can’t but laugh at such claims. The raid continued for more than 40 minutes. Didn’t anyone discover during all these long minutes that they were opening the road for [IS] to advance? I tend to believe that it was the work of the Pentagon, and that Mr. Kerry wasn’t aware of what was going on. It might be also that the hawks in Washington are spreading their wings for a new policy under a different administration. These [remaining] few months [of the current US administration] are only for wasting time.”

Iran is assessing the situation in accordance with its agenda and interests, which may not necessarily be fully congruent with those of Russia — but both countries are nevertheless trying to make use of their common interests in Syria to solidify their front. Their main objectives include keeping defiant Syrian President Bashar al-Assad in power, preserving the structure of governance in Syria and combating terrorism. One of the main requests the Iranians made during the many negotiations over Syria was the designation of Jabhat Fatah al-Sham, previously Jabhat al-Nusra, as a terrorist entity, just like IS; this request was fulfilled in the US-Russia agreement. This step was enough for Tehran to at this stage abide by the deal despite all the concerns, as the latter alone could be seen as a blow to its regional rivals, who saw the rebranding of Jabhat al-Nusra as a way to place it along with other Syrian opposition factions on the other side of the negotiating table.

Ultimately, to Iran, the collapse of the US-Russia agreement — as the deal itself — will not change anything in its only plan on the table, which involves supporting Assad until he survives the tide. Indeed, the visit by Iran’s Deputy Foreign Minister for Arab and African Affairs Hossein Jaber Ansari to Damascus on Sept. 19 reflected this stance. After meeting with Assad, Ansari said, “Iran is determined to provide Syria with all the facilities it needs in its critical fight against terrorism."