Aleppo and its countryside are under heavy shelling by the regime as observers fear this a prelude to a major siege of the city's opposition-controlled areas. 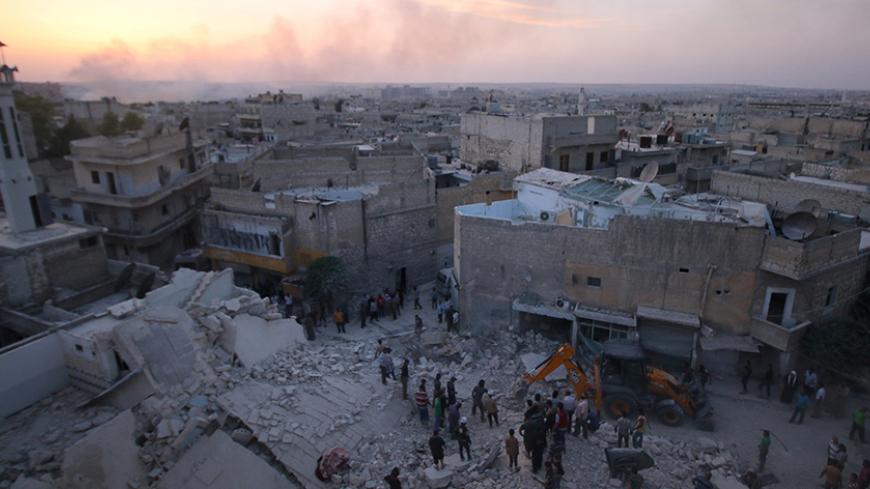 ALEPPO, Syria — The city of Aleppo and its northern countryside have been under intensified shelling by the forces of President Bashar al-Assad's regime and its allies, in what seems to be a prelude to a massive attack on the city. Since April 25, the neighborhoods controlled by the Syrian opposition in the city of Aleppo have been under the bombardment of various types of weapons, including barrel bombs, missiles and rockets.

The daily bombing has produced many civilian casualties. On June 5, more than 53 people were killed in the regime’s raids on the neighborhoods of Katerji, Karam al-Jabal and al-Zabadieh.

The residents of the city of Aleppo, after the horror of shelling, are now most troubled by the prospect of a siege by the regime’s forces. To lay siege to the city of Aleppo, the regime forces are betting on cutting Castello Road, which is the only outlet connecting the opposition-controlled areas in Aleppo to its northern countryside and through the province of Idlib to Turkey. To that end, the regime has been shelling this road almost continuously ever since the escalation of the bombing in Aleppo on April 25. One of the most prominent potential points of attack is the nearby Handarat camp.

On Al-Monitor’s way to the Handarat camp on June 1, cars were swerving to avoid the holes left by the heavy shelling. Various cars and trucks were set ablaze and blocked the way until the civil defense teams could remove them. On May 31, seven civilians were killed on the road when their car was bombed by regime forces.

Near Castello Road, Al-Monitor met Mohamed Alaa al-Jalil, a volunteer with Syria Charity Ambulance in Aleppo. Jalil said, “We try to be present around the clock near Castello Road, given the high number of injuries. Victims often remain stuck there for several hours before we are able to rescue them under the intense shelling.”

When Al-Monitor arrived at the Handarat camp, everything was destroyed. Since April 14, the camp has witnessed three fierce battles as the regime fought for control.

However, the Free Syrian Army managed to repel the regime forces’ attacks and is still in control of the camp. An FSA field commander, Maaouf Abu Bahr, offered a quick tour. He told Al-Monitor, “Every day, the Handarat camp and the nearby areas face heavy shelling by Russian and regime aircraft, but whatever happens, we will not withdraw.”

The camp is situated in a strategic location only about two kilometers (a mile) from Castello Road, on a high hill that gives the forces controlling it a significant advantage.

The FSA’s loss of the Handarat camp leaves the city of Aleppo vulnerable to a blockade. Abu Bahr told Al-Monitor, “We will not allow them to impose a blockade on our people in Aleppo. With our modest capabilities, we managed to repel the regime’s massive military attack on the camp. Over the past two months, the regime lost 150 of its fighters in Handarat.”

On April 14, just four days after Syrian Prime Minister Wael al-Halqi announced the start of a military operation with the Russian air force to liberate Aleppo from armed groups, the regime’s forces and allies failed to break into the Handarat camp. They failed twice more in May.

While it seems that the regime forces have not given up trying to blockade Aleppo, the shelling by the Russian and regime’s fighter jets on Aleppo and its northern countryside suggest that the plan may have changed in favor of attacking larger areas. The shelling by the regime and its allies was heavily concentrated on Castello Road, the Handarat camp, the nearby area of al-Malah and the cities of Huraytan, Anadan and Kafr Hamra in northern Aleppo. All of these areas are under the FSA’s control.

Media circles close to the regime describe the upcoming attack on Aleppo as a major military operation. As the regime prepares to attack, observers are asking: What does the opposition have up in its sleeve?

There is no comparing the military equipment of the regime and the conventional arms possessed by the opposition. The regime has powerful air support offered by Russia and Lebanese Hezbollah, while Iranian and Iraqi Shiite factions are providing fighters.

However, the opposition forces are able to launch surprise attacks that allow them to confuse the regime’s forces. Jaish al-Fatah, an operations room including several factions of the opposition, notably Ahrar al-Sham, Faylaq al-Sham and Jabhat al-Nusra, attacked the regime forces' positions in the southern countryside of Aleppo on June 3 in such an unexpected move. The attack was such a surprise that the regime forces lost numerous important positions in one day, including Tallat al-Qarasi, the air defense battalion and the weapons warehouse in Khan Tuman, in addition to the villages of Maarata, Humera and Kalaajieh.

Opposition forces are trying to keep up their sporadic attacks while the regime gets itself ready for the promised major offensive. In the meantime, Aleppo’s residents keep waiting for the siege to begin.