The regime and its allies have suffered heavy losses in an offensive against the opposition’s largest stronghold in the northern countryside of Aleppo. 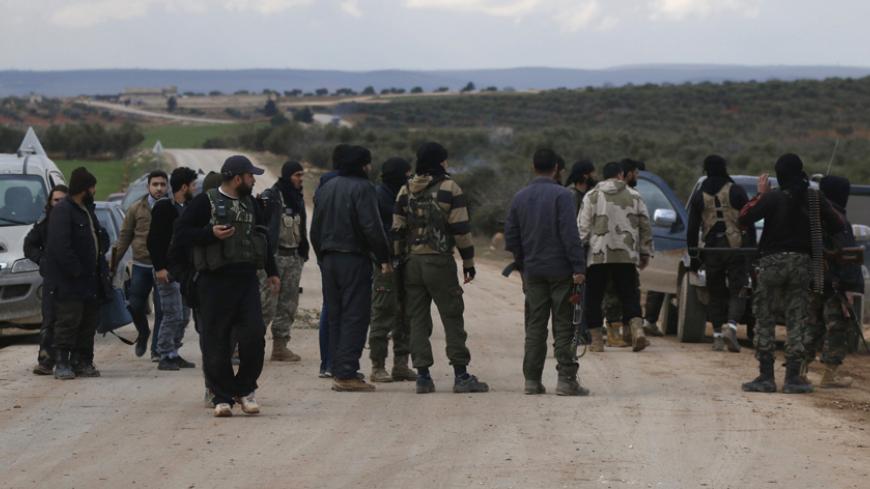 ALEPPO, Syria — Fighting fronts exploded in Aleppo following a relative calm that prevailed for almost a month. Planes kept roaming the skies over the city and its countryside despite the harsh weather conditions and the snow, while clashes were ongoing.

The regime forces, with Hezbollah and Iran’s unhidden support, wanted to resolve the battle in Aleppo, particularly in its northern countryside, which is the largest opposition stronghold. Despite the sudden progress that was made by the regime forces, it can be argued that the plan, in preparation for months, has failed to achieve the regime’s political and military goals. The regime and its allies have suffered heavy losses in the offensive.

The events began at 6 a.m. Feb. 17 as regime forces conducted a surprise attack against opposition forces. The offensive was only covered by the Hezbollah-run Al-Manar news channel, which may confirm Hezbollah’s significant role in this battle. The offensive was conducted from several positions at the same time, with the objective of confusing the opposition forces and distracting them from the offensive’s main goal.

The al-Aziza, al-Rashidin and al-Zahraa fronts witnessed fierce clashes that did not result in the advance or retreat of any of the parties. The main and most violent offensive took place in the northern countryside of Aleppo, starting from two fronts. With the help of their allies, the regime forces and Hezbollah managed to breach and infiltrate into the opposition defenses and take control of the towns of Bashkoy, Ratyan and Hardetneen.

The surprise advance confused the opposition forces, as it separated the northern countryside, which is next to Turkey, from the city of Aleppo and its western countryside, thus blocking military supply routes. The regime forces wanted, through this advance, to open the way to troops that have been besieged in the towns of Nubul and al-Zahra. For its part, the opposition was quick to mobilize its forces and managed to regain control over the town of Ratyan on the same day, with the exception of a two-story building, where dozens of soldiers were barricaded.

The second offensive in Aleppo’s northern countryside took place in the area of al-Mallah, and the goal was to besiege the city of Aleppo. The regime forces control al-Mallah, which oversees the Castello road, meaning that the only outlet to the "liberated" neighborhoods in the city of Aleppo is blocked.

However, the rebels stationed in Aleppo told Al-Monitor that this attack failed miserably and more resembled a “suicide attempt.” During the offensive, more than 75 members of the regime forces were killed, including Iranians and Lebanese, according to the Forensic Medicine Commission of Aleppo, which pulled out the bodies.

On Feb. 18, Al-Monitor entered the confrontation lines at al-Mallah and Ratyan. The huge destruction showed al-Mallah has been the subject of ferocious shelling over the past few months. A rebel stationed in al-Mallah told Al-Monitor, “A vast distance separated our positions and theirs. Any attempt by any party to advance would be suicidal, because the moves would be open to the other party.”

Referring to the regime forces' positions in Handarat, he said, “They [the regime forces] have attacked us, starting from this direction [Handarat]. Yet, none has survived. It was clear that they wanted to advance at all costs.”

The regime forces’ attempt to besiege the city of Aleppo serves as a pressure card, as the negotiations to freeze the fighting in Aleppo are hampered. These negotiations are sponsored by the UN envoy to Syria, Staffan de Mistura, who announced Feb. 18 that the regime agreed on “a temporary truce” that includes the halt of all aerial bombing and artillery shelling of Aleppo for six weeks. 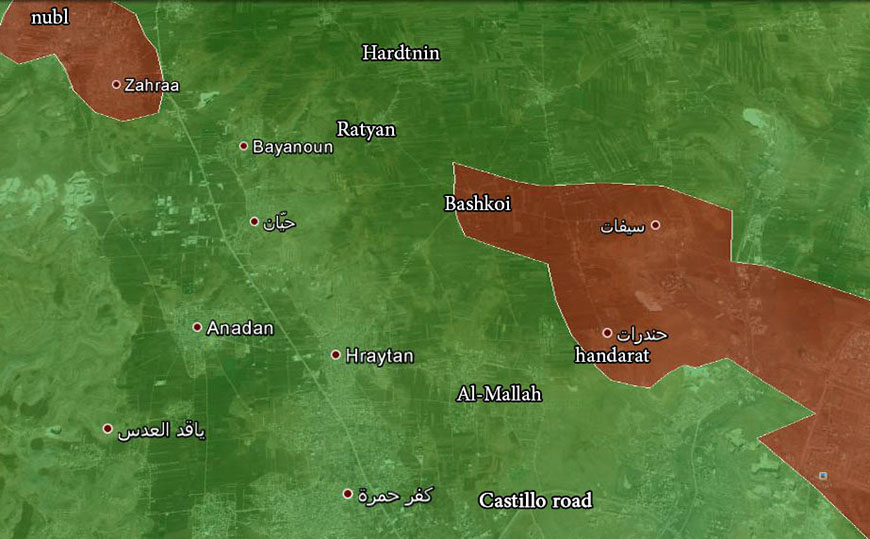 A map of the latest developments as of Feb. 22, with areas under regime and Hezbollah’s control in red and those under opposition control in green.

As soon as the clashes ended in the town of Ratyan, Al-Monitor spoke to Lt. Col. Abu Bakr — a military commander of al-Jabha al-Shamiya, which is the largest rebel faction in Syria — as the opposition was trying to take control over the last building, where the regime forces were barricaded. The clashes continued until the evening; the 48 [Syrian] soldiers who were inside the building surrendered after they ran out of ammunition and were captured by the rebels. These included Syrians affiliated with Hezbollah.

The opposition seemed defiant. Abu Bakr told Al-Monitor that in the town of Ratyan “de Mistura is no longer an honest negotiator,” in reference to de Mistura’s statement that Assad is part of the solution in Syria. He added, “The regime’s plan has failed, and it has lost 300 soldiers on the various Aleppo fronts in two days. … The land, on which we are standing now, will be a grave for anyone who tries to invade it.”

During our tour in Ratyan, new reinforcements for the rebels were continually arriving, while the remaining men of the town took up arms to defend their homes against the regime forces and Hezbollah. A resident of the town said that what is happening is an Iranian attempt, in cooperation with Hezbollah and the regime, to occupy their lands. The civil defense forces discovered 34 civilians who were executed by the regime and foreign militias before their withdrawal from the town. This can only be explained as a sectarian massacre.

The clashes continued until Feb. 20, which enabled the rebels to regain control over Hardetneen, where the regime forces detained 200 civilians who were used as human shields in schools. During this battle, the opposition captured nine members of the regime forces and killed nearly a dozen, a field commander told Al-Monitor, while others were captured as they were trying to escape in civilian clothes.

The opposition did not take a defensive position, but launched a counteroffensive through which it gained control over Arab Salloum, which had been under the regime’s control since Dec. 14.

Following their advance, the rebels became focused on Bashkoy and Handarat in order for them to secure the Castello road, and push the specter of the siege away from the city of Aleppo. While many from the regime forces and their allies were killed or captured, the latter took vengeance on civilians, since it was discovered that 14 civilians were executed in Hardetneen by the regime and Hezbollah, in addition to the massacre of Ratyan, making a death toll of nearly 50 civilians, including nine children and five women.