After a string of defeats in Aleppo, the rebels are making some progress against the regime. 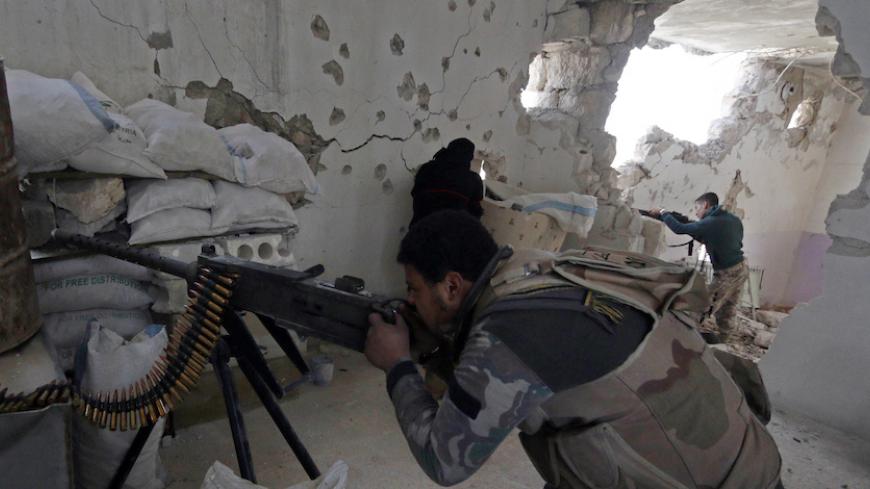 Rebel fighters of Al-Sultan Murad Brigade take positions inside a damaged building as they aim their weapons at the front line in the Handarat area, north of Aleppo, March 1, 2015. - REUTERS/Hosam Katan

ALEPPO, Syria — At the highest point in the village of Handarat, located 5 kilometers (3 miles) north of Aleppo, a Hezbollah flag still flies atop a water tank, even though the rebels took control of most of this strategic village March 9. The village sits on the road linking Turkey to Aleppo and is close to Alcastelo road, the last supply route for the rebels in Aleppo.

It was a decisive battle. The regime’s warplanes and helicopters did not leave the sky until the evening of March 10, the day Al-Monitor entered the village. The aircraft targeted the rebels' rear supply lines in the areas of al-Mallah and Alcastelo, while mortar shells and fire from tanks rained down on the village.

The opposition forces' attack on Handarat came as a surprise, as a new and bigger regime offensive on the Aleppo countryside was expected. The regime had first attacked the opposition Feb. 17, resulting in heavy regime losses. But it was the opposition — predominantly al-Jabha al-Shamia and Jabhat al-Nusra — that started the second round of the battle by attacking the regime.

“During daytime, there were no clashes with individual weapons, but the fighting front used to ignite at sunset, as the rebels conducted infiltrations,” said a field leader from al-Jabha al-Shamia, the largest opposition group in Syria.

He told Al-Monitor on condition of anonymity, “We noticed that the regime’s forces, along with Hezbollah and Iran, went into a state of confusion after their losses during the previous assault on al-Mallah and Ratyan. … So we decided to attack and recover the village of Handarat.”

The opposition does not fully control Handarat; the north side remains in regime hands. But the opposition has seized the opportunity. On March 7, the opposition took al-Madafa Hill, which oversees much of the region and its supply routes, strengthening its position in the battle.

The field leader said, “As of now, we control 75% of the village. The area of ​​Amrit and the Air Defense Battalion are still in regime hands. The battle is ongoing to control them.”

Handarat may just seem like a small village north of Aleppo, but both the regime and the opposition are aware of its strategic value, which is why both sides are desperate to control it. The fight is street-to-street despite the village’s small size.

For the regime, Handarat, which it took control of Oct. 3, 2014, was an essential launching point westward through Alcastelo to complete its military cordon on rebel-controlled neighborhoods. The regime’s plan was known as “rainbow.”

The rebels understand that controlling Handarat would allow them to cut supply routes from the town of Bashkwi, which is the regime’s key area of control in the heart of the northern Aleppo countryside. The regime has used Bashkwi to advance toward Nibil and Zahra. If the opposition takes control of Handarat and Bashkwi, a new route leading to Aleppo would connect the northern countryside to Turkey, thus making a blockade more difficult.

In addition, the rebels have opened several fronts in Aleppo to relieve pressure on the northern countryside. The March 4 bombing of the air force intelligence branch in Zahra is a salient example, though the operation failed since neither the regime nor the opposition had changed positions in Zahra. But the bombing served to end the myth of the intelligence branch — a significant move for the opposition since this particular stronghold had prevented the opposition from advancing toward western neighborhoods. The branch also had symbolic importance: It was the former headquarters of the regime’s operations command.

While the battles and confrontations continue in southern Syria in the Daraa-Quneitra-Damascus triangle, it seems that the regime and its allies are likewise exerting major efforts in the south. This triangle is politically and strategically more important because it is close to the capital, Damascus. Until the battle in the south is decided, the opposition has regained the lead in Aleppo, in the country’s far north. Over the past months, the opposition had lost much in Aleppo to the regime and to the Islamic State.