Rebels in Aleppo stretched thin between regime, IS

Rebel supply lines to the city of Aleppo are at risk of being cut as the rebels simultaneously fight government forces and the Islamic State in Aleppo’s northern countryside. 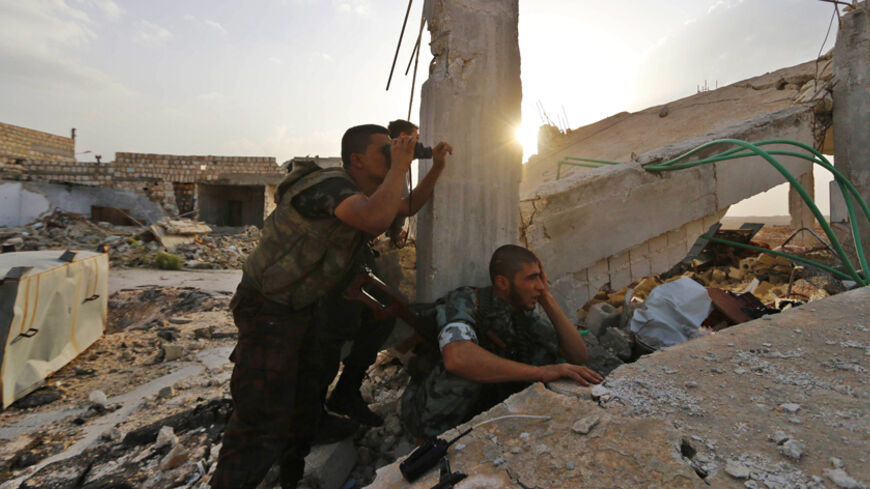 ALEPPO, Syria — At times in Aleppo's rebel-controlled Shaar neighborhood, one could forget that a war has been raging across the country for nearly four years, were it not for the destruction and burned-out buildings as a result of bombing. Swings are filled with children, and their laughter rings through the neighborhood. On the outskirts of Aleppo, however, at the city's northern entrance leading to the so-called liberated neighborhoods, the scene is completely different. Successive reinforcements for the various rebel formations are arriving amid the sound of explosions and assorted battles after Syrian President Bashar al-Assad's regime forces suddenly attacked Oct. 3, the first day of Eid al-Adha, and gained control of strategically important areas.

The regime began the surprise attack at 7 a.m. on the Handarat region, north of Aleppo, taking the village of Handarat and the town of Saifat, reaching the areas of Bashkawi and al-Millah. In doing so, the Handarat-Aleppo road — the most important road in terms of military supplies for rebels, stretching from the countryside of northern Aleppo to the city — was cut. The only remaining route connecting the countryside to the city is the Castillo road, which itself is no more than 2 kilometers (1.25 miles) from the front. If the regime cuts that road or gains control of it, rebel supply lines to the city of Aleppo will be completely severed, and the rebel-held neighborhoods besieged.

Opposition forces launched counterattacks on regime-held positions on Oct. 5 and were able to regain control of al-Millah and the Bashkawi junction. Since regime forces still control the village of Handarat and the town of Saifat, however, the Handarat-Aleppo road remains closed. Rebels have placed piles of stones at the beginning of the road to warn that its use is fraught with risk. The remains of cars hit by explosive barrels lie on the side of the road.

Al-Monitor visited the frontlines in Handarat on Oct. 3. A field leader in the Hazem Movement, one of the rebel formations, commanded his members to spread out. Fear showed on their faces; the regime's advance had been unexpected.

The fighters moved out among the large rocks on the highest hill overlooking the village of Handarat. The leader told his men, “It is necessary that not a single member of the regime remain here.” He also spoke of the importance of quickly regaining control of the area, given its importance as a supply line for the rebels.

The fighters erected platforms for TAO missiles, preparing for the arrival of regime military vehicles. Every now and then, when a helicopter or plane approached, they dispersed to hide among the rocks. Over the course of three days, the Hazem Movement was able to destroy four tanks and damage one BMB vehicle, according to information obtained by Al-Monitor from the Hazem Movement media office. This helped to slow the advance of the regime forces, but they remained in control of their positions in Handarat.

The battles continued until Oct. 13, when the rebels managed to besiege the government troops that had infiltrated Handarat. Mohammed Faisal, a media official in the Hazem Movement, told Al-Monitor, “The regime militias are now almost completely besieged in Handarat, after we took control of the surrounding hills and cut their supply lines.”

The government forces tried to advance farther in the area by taking advantage of the foreign Shiite militias fighting alongside it, moving them to the frontlines to carry out assaults, while the army and Baath Brigades spread out along the back lines.

Faisal said, “The regime depends first and foremost on foreign fighters to carry out assaults, because its forces are not aware of the nature and the danger posed by the area they are infiltrating. Additionally, the regime is pushing these fighters to open a road to the pro-regime towns of Nubl and Zahra, which are located at the heart of the liberated areas.”

This battle coincides with the ongoing clashes being fought by rebels in the northern countryside of Aleppo against the Islamic State (IS). This has forced them to withdraw some of their forces fighting IS to confront the threat of Aleppo falling under siege by the regime. Meanwhile, the rebels have tried to distract the regime fighters with side battles to relieve pressure on the Handarat front.

Violent clashes also erupted around the Air Force Intelligence branch, during which the rebels were able to gain control of a nearby school that the regime had been using as a military headquarters.

The Islamic Front opened a front in the southern countryside of Aleppo, trying to tighten the noose on defense factories where explosive barrels are produced. The area is also a central launch site for helicopters taking off to bombard neighborhoods and towns under rebel control.

Although the rebels' remaining supply line connecting the countryside to the city of Aleppo remains unobstructed for the moment, it is still at risk. In light of the rebels' concurrent battles with IS and government forces, they appear to be in a position to lose strategic regions or to be forced to withdraw from them, with their forces spread thin along a lengthy frontline between the two parties.