After successful sieges and truces in Damascus and Homs, all eyes turn to Aleppo, where rebels are trying to prevent the Syrian regime from imposing a similar siege. 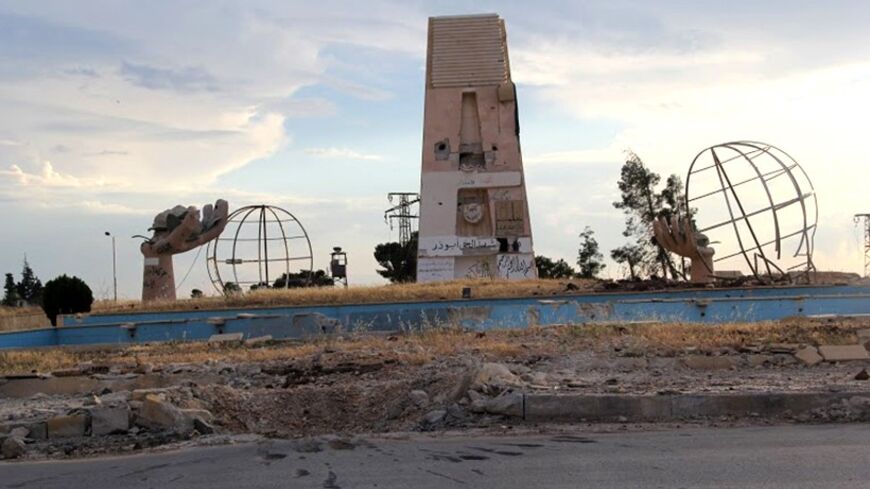 Castello Road, also known as the "Death Road," is the main road leading to Aleppo and has little traffic because of continuous shelling, May 21, 2014. - Mohammed al-Khatieb

ALEPPO, Syria — The siege policy pursued by the Syrian regime against rebellious regions and cities has proven to be the most effective means to subdue them. This method has been utilized by the regime from Homs to Damascus and its suburbs, where the strategy of starvation proved its effectiveness as a weapon to force the rebels into abandoning their demands.

All eyes are turned north now toward Aleppo, the largest opposition stronghold in Syria, after the rebels in Homs accepted a deal with the regime that resulted in their retreat from the Old City on May 7. The facts on the ground indicate that the regime plans to adopt the same strategy that proved successful in Homs in Aleppo, whereby "liberated" areas of the city would be isolated from its countryside and the siege slowly tightened around them.

After recruiting fighters in the so-called National Defense Force and Baath Brigades, regime forces — with the help of Iran, Iraqi Shiite brigades and Hezbollah — have succeeded in controlling large swaths of land in Aleppo’s southern countryside, from the strategically located Khanaser village, all the way to Sfeira, adjacent to the defense factories.

As a result, regime forces secured a supply route to the neighborhoods and military barracks under their control in the west of Aleppo, as well as Aleppo International Airport in the east. Regime forces did not stop there, they headed northeast and managed to reach the Nakareen and Sheikh Najjar areas in January. They also managed to cut off one of the vital roads linking the "liberated" areas of Aleppo with its northern countryside in April.

The majority of Aleppo’s neighborhoods under the control of the rebels have become ghost towns. They have been emptied of their residents and filled with the uninterrupted sound of fighter jets patrolling over the city. The rubble of destroyed houses lies untouched, and cars loaded with furniture get ready to move. Residents left most of Aleppo’s rebel-held neighborhoods because of the barrel bombing campaign that has been ongoing for six months, in addition to the continuous bombardment, intensifying their concerns about falling under a blockade. 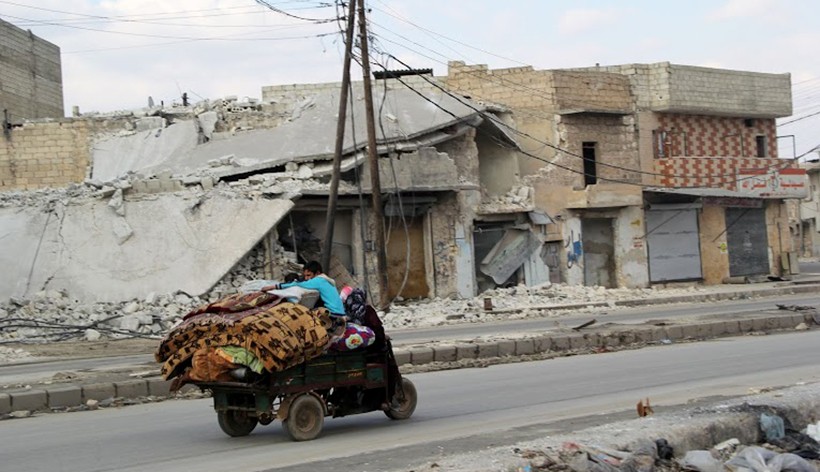 But local rebels are confident the regime won’t be able to replicate its siege on Aleppo. Col. Abdel Jabbar al-Oqaidi, the former commander of the Revolutionary Military Council of Aleppo, ruled out the regime’s ability to besiege it. “Aleppo is a sprawling city defended by well-organized heroes under the command of a unified authority. The regime’s plan will thus be thwarted and it will be unable to blockade the city,” he told Al-Monitor. “The connected fronts, almost completely liberated countryside, and the open border with Turkey, make it exceedingly difficult for the regime to besiege Aleppo.”

When asked about what makes an Aleppo siege impossible, and what the differences are when compared with Homs, he said: “The countryside around Homs is predominantly pro-regime, for sectarian motives. Aleppo’s countryside, on the other hand, is pro-revolution and most of its inhabitants are fighting against the regime.”

Currently, the rebel-held eastern part of the city can be accessed through one solitary main road known as the Castello Road, which is heavily bombarded on a daily basis by regime artillery and helicopters lobbing explosive barrels, making traveling on it dangerous. Residents refer to it as “the death road.” The scenes of death on the both sides of the road instill fear among drivers, as they drive fast, dodging potholes, rubble and bombs falling from the sky.

However, there are many other routes that lead to Aleppo, reducing the possibility of the regime completely besieging the city. Yet, the continuous advance by regime forces in the Sheikh Najjar area, northeast of Aleppo, can allow them to block the main roads leading to the city, blocking the rebels’ main supply routes. 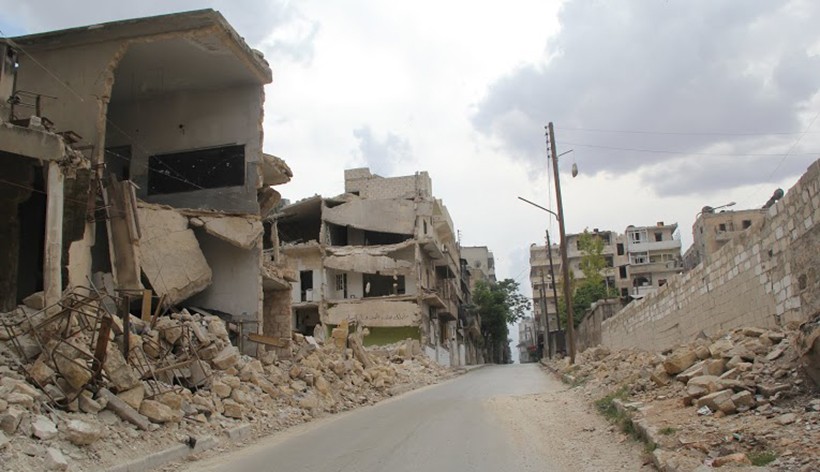 Houses are destroyed after an aerial bombing in the eastern al-Ansari neighborhood of Aleppo, May 21, 2014.

The regime’s advance in Aleppo drove armed opposition factions there to form a unified military command center at the end of February, tasked with countering the threat of a blockade against the city. This center, dubbed “the Syrian people’s command center,” halted the regime’s advance at Sheikh Najjar in March; the neighborhood, which includes an industrial zone, remains hotly contested.

The command center — composed of the Islamic Front, Jabhat al-Nusra, and the Mujahedeen Army — succeeded in the first weeks of its formation in making qualitative gains. It managed to cut off the only supply route for the regime into Aleppo, though the latter quickly replaced it with an alternate dirt road that it built in less than 10 days on April 11 after entering the Ramousa neighborhood. The unified command also took control of large parts of this neighborhood, occupied the strategic Tell Shuwehneh hilltop, and advanced in the old Aleppo area in March.

But these successive victories that followed the formation of the unified command center gradually slowed in pace on most of Aleppo’s front lines, with the exception of the Air Intelligence Directorate front. There, the rebels are pressing, for the potential fall of the Air Intelligence Directorate and its Zahra neighborhood would secure for the opposition a new main supply road linking Aleppo with what is known as the Gaziantep Road.

Othman, a rebel fighting on the Zahra front, told Al-Monitor, “Although we are advancing at a slow pace in the Zahra neighborhood, we are trying through the reinforcement of our positions not to lose it to a potential counter attack.”

“The fall of the air force Intelligence headquarters, which can happen at any moment, would constitute a significant gain for us. A new and short supply route to Aleppo would be opened, which would cut short the dreams of the regime to besiege Aleppo,” he added.

One of the leaders of the Islamic Front, the largest rebel faction in Syria, emphasized that countries backing the opposition would not allow Homs to be besieged.

The leader, who spoke on condition of anonymity, told Al-Monitor that a siege of Aleppo would be a devastating blow to opposition forces and might threaten to end the revolution in Syria. Major foreign powers controlling the ongoing war there would never allow such an eventuality to occur, according to him.

“Those countries want the war in Syria to endure, and laying siege on Aleppo would signify that the regime is close to extinguishing the revolutionary flame. Keep in mind that those same countries do not want the rebels to win the battle yet. We, on the ground, are fighting with whatever capabilities we possess. Aleppo is currently the rebels’ largest stronghold. Even if we do not receive military aid, the rebels will never allow Aleppo to be besieged, and if necessary, we will use swords to continue the fight.”

All photos by Mohammed al-Khatieb