An exclusive first hand report on how fearful residents, along with opposition forces, have fled east Aleppo en masse as the Syrian government's barrel bombing campaign shows no sign of relenting. 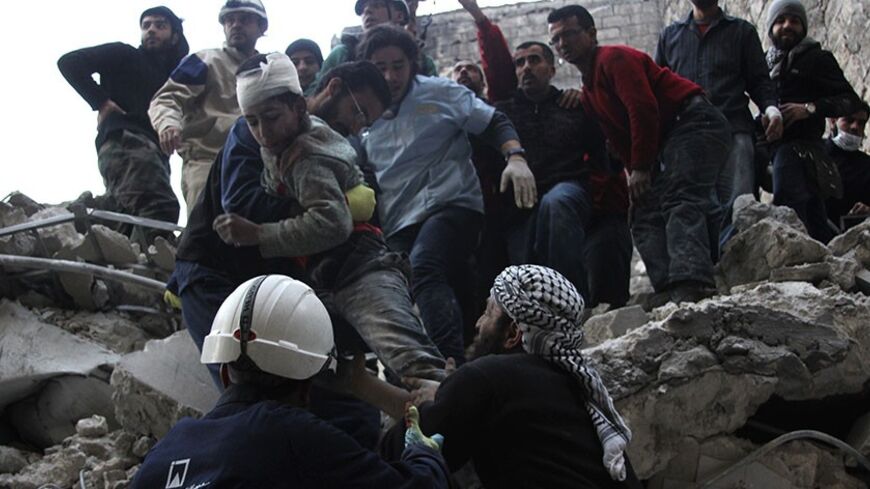 ALEPPO, Syria — The regime’s Aleppo campaign has reached a new crescendo, with the controversial barrel bombing taking center stage in what is essentially a drive to depopulate the rebel-held east of the city. It's a horrific tactic that kills and maims innocents, and such indiscriminate heavy bombing may amount to a war crime. The battle has begun in earnest, although any anticipated all-out assault has so far failed to materialize. Instead, it is a careful, drawn-out and tactfully planned operation, seizing upon changing factors both on and off the battlefield — stalled peace talks in Geneva and rebel infighting.

Regime forces, bolstered by local militias such as the Quds Battalion, drawn from the Nayrab Palestinian refugee camp, and the National Defense Forces (NDF), comprised mainly of local Sunni tribes as well as foreign militias such as Hezbollah and the Iraqi Shiite Abu Fadl al-Abbas Brigades, have been making slow but steady gains in their campaign to recapture the city and surrounding towns, skewering vital links to rebel-held territories in the north and the northeast along the Turkish border.

The momentum in Aleppo has shifted decisively in favor of the regime recently, and it is no secret that the Syrian government came perilously close to losing the city on several occasions, most notably when it seemed powerless to stop rebel advances into new territory in the west, or lift the crippling siege that cut off the only means of resupply via the Damascus highway and the Khanaser military route.

But a series of events, some planned and others merely a stroke of good fortune, saw the rebels’ momentum reversed and their grip slowly loosen. The man credited with turning the tide in the regime’s favor is Brig. Gen. Suheil al-Hasan, aka Nimer (Tiger), head of military operations in Aleppo, and the mastermind behind the barrel-bombing strategy. His string of victories began with securing the Khanaser military route, thereby releasing the rebel stranglehold on west Aleppo, and culminated in the decisive recapture of the strategic town of Sfireh. The capture of this town paved the way for regime forces to advance into east Aleppo and other strategic areas around the city, turning the table on the rebels, who were by now heavily bogged down by their own feuds, infighting and corruption.

Indeed, the greatest contributing factor to the regime's latest round of victories has been the violent and bloody infighting between rebels of the Islamic Front, and al-Qaeda’s offshoot, the Islamic State of Iraq and al-Sham (ISIS). The fighting is so intense and bitter that it sapped the strength and morale of the anti-regime forces and saw once powerful brigades such as the Qatari-backed Liwa al-Tawheed — which was greatly weakened by the death of its charismatic leader Abdelkader al-Saleh in a regime strike last November — wither away and retreat from the advance of the regime. In fact, the only rebel factions still strong enough to resist and fight the regime on the latest fronts are the radical Islamists. The town of Azizeh, just outside the Marjeh area in the east, the strategically vital Sheikh Najjar industrial zone, the old city and Aleppo's central prison are all defended by al-Qaeda’s affiliate, Jabhat al-Nusra, as well as Salafist militants Ahrar al-Sham, a member of the Islamic Front.

More of a concern for mainstream rebels and their internal and foreign supporters are rumors spread by displaced persons from east Aleppo that some fighters are laying down their arms and abandoning their posts in rebel parts of Aleppo city, fleeing across the border to Turkey while they still can. Essentially, the only rebel forces left fighting in Aleppo are radical Islamist groups, the type that backers of the moderate Syrian opposition do not want to see prevailing.

Unfortunately, it is not only rebels that are abandoning the city, civilians are too, in droves. In what is perhaps the largest mass evacuation of a city in the modern history of the region, hundreds of thousands of people have left their homes and fled. Those few that have opted to stay behind still face the fury of the unrelenting barrel bombs. The only crossing between east and west Aleppo at Bustan al-Qasr has now been partially closed by the regime, allowing exit only from its areas, not entry. Anyone now wanting to travel to cross this divided, broken city has to make a trip of over 300 kilometers (186 miles). Anyone that does make it to the west has to undergo stringent ID checks and bag searches to rout out rebel supporters.

Young men newly arrived from the east are herded off into waiting buses for conscription into the army, unless they have valid documents stating their military service has already been completed or officially postponed. Frequent raids and searches are carried out on houses where the displaced settle, as the regime looks for sleeper cells and weapons caches. Reasons like these are why the majority of Aleppans have opted to leave their city to Turkey, or nearby towns instead of having to risk the regime’s security checks.

Maher, a displaced resident of Fardos, a rebel-held neighborhood just behind Bustan al-Qasr, described to Al-Monitor what he saw when he recently went back to check up on his house. “I could hardly recognize my own neighborhood, the place I grew up in. It was full of dust and rubble, debris and broken bits of cars and buildings were everywhere. It was deserted, no shops open or street vendors anywhere, everyone has gone except for the stray dogs and the garbage.”

Aisha was also displaced from her home in Bustan al-Qasr along with her elderly mother and younger sister. They now live in makeshift accommodations in housing estates outside the Hamdanieh suburb. “We fled because we feared for our lives from all the bombs. They could just fall anywhere without warning, it was like being in a horror movie. The rebels’ mortars would also sometimes misfire and slam into people’s houses. We couldn’t take it any longer. When we got to the crossing it was very crowded, they weren’t letting people through, only for emergencies. We paid a bribe to get across,” she told Al-Monitor.

The voices and misery of Maher and Aisha are lost amid the counterclaims and accusation of both sides of the conflict. The regime maintains it only targets rebel positions, and that the rebels are using civilians as human shields. More so, in its reckoning, the regime supporters claim the emptying of populated areas on front lines helps save more lives in the long run. The rebels for their part accuse the regime of deliberately and indiscriminately targeting civilians as mass punishment for their support of the fighters. Regardless of which side is to blame for what, it is quite clear that both bear responsibility for the catastrophe that has befallen Aleppo and its people.