The Syrian regime's successful takeover of the strategic town of Sfireh, south of Aleppo, has rebels worried that their gains in Aleppo will soon be reversed. 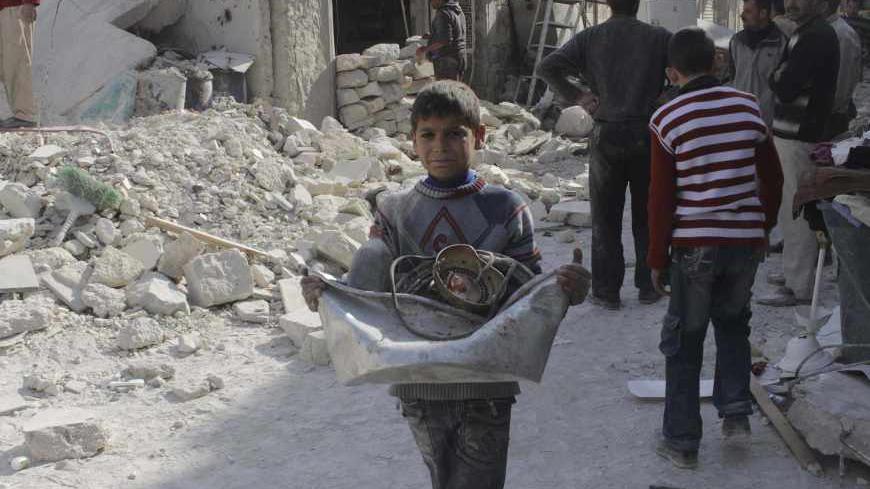 A boy collects his belongings amid the rubble of collapsed buildings after what activists said was shelling by forces loyal to Syria's President Bashar al-Assad in Aleppo, Nov. 24, 2013. Airstrikes around the northern Syrian city of Aleppo killed at least 40 people on Nov. 23, most of them civilians, the Syrian Observatory for Human Rights said. - REUTERS/Molhem Barakat
Edward Dark
@@edwardedark
November 24, 2013

ALEPPO, Syria — After almost a yearlong stalemate in Aleppo that hasn’t seen much in the way of significant gains for either side, the table is now being set for a major showdown. Although a serious regime offensive to retake Aleppo has been rumored on many previous occasions, this time it seems like it may be the real deal. Aside from small pieces of territory exchanging hands and intermittent clashes and skirmishes of varying ferocity, there has been nothing like the large-scale offensive recently launched by the regime in the southeast of Aleppo.

The regime’s rapid and successful takeover of the strategic town of Sfireh and nearby villages just to the south of Aleppo city has rebels visibly shaken. For too long they’ve been complacent and overconfident that their control over much of Aleppo province was unchallengeable. But a number of significant factors have changed this calculus and proved to be a rude awakening.

This has hastened a shotgun wedding of several major Islamist factions fighting in Aleppo in the name of the Islamic Front as well as a call to arms and a lockdown in areas of the city they control. A curfew was imposed, and the only crossing from rebel-held east Aleppo into the regime-held western part was permanently shut, which meant students couldn’t go to university and workers, especially civil servants, couldn’t get to their jobs. Residents of Aleppo now face the bizarre notion that to travel a few blocks from the east to the west of the city or vice versa, you had to travel about 500 kilometers (310.7 miles) down to Hama, then back up again through side roads and military routes, a journey of around 10 hours.

The rebels’ recent troubles started after Turkey tightened its border controls, particular after the Islamic State of Iraq and al-Sham (ISIS) took over adjacent territory. They were exacerbated by internal fighting, with ISIS going after various rebel brigades like Asefet el-Shamal, Ghuraba el-Sham and Shuhada Bader, which significantly weakened the rebels in the northern countryside and threatened to ignite a full scale interfactional war. All these are contributing factors to the rebels’ string of defeats, but the most significant one — not much talked about — is the defection of former rebels who helped the regime retake the strategic Mwasalat Haditha area.

This is what has rebels worried the most, and their paranoia increased when the military head of the powerful Liwa al-Tawhid brigades, Abdelkader al-Saleh, was killed along with several other commanders in a pinpoint regime airstrike at a meeting they were attending. The rebels initially blamed nearby villagers for giving away their coordinates and detained dozens for questioning.

It soon became apparent, though, that any treachery came from within the rebels’ own ranks. They now fear the same scenario may be repeated if the regime enters Aleppo, with some factions waiting for the right opportunity to stab them in the back. That explains the unprecedented and unpopular measures of imposing dusk-till-dawn curfews as well as sealing the crossing. The crossing was reopened, however, for a few hours on Nov. 23 for emergencies.

Another very significant change on the ground is the local militia now fighting alongside the regime’s forces. This is a fairly new phenomenon in Aleppo, as the regime had previously relied on Hezbollah fighters and the National Defense Force (NDF), which is largely drawn from minorities. The new Quds militia in Aleppo, though, is different. It has almost all Sunni fighters drawn from local tribes and clans who inhabit southern towns such as Jibreen and the Nayrab refugee camp, where some Palestinians have also joined their ranks.

What this fresh offensive has meant in practical terms is that regime forces are now only a few kilometers from the rebel-controlled eastern edge of Aleppo city. A further push would see them inside the strategic area of Sakhur. If they manage to take that, they effectively skewer and divide the rebel parts of the city, cutting them off from one another and from vital supply lines. It would also pave the way for them to push into the Sheikh Najjar industrial zone — latest reports indicate that this has begun — and the Masaken Hanano suburbs currently under ISIS control as well as the densely populated Sha’ar area, which is home to many of the rebel factions’ headquarters and bases.

Already residents of those areas have started leaving their homes, fearing intense fighting that could flare up at any time. Most of them have opted to move farther into rebel-controlled areas of the city, away from the impending frontlines and into relatively less-dangerous areas. But the keyword here is “relative,” as the regime might also attack from central Aleppo across Bustan al-Qasr and Kalaseh, or the old city.

It still remains to be seen, however, if the regime wants, or indeed has the ability, to enter rebel strongholds in the city. It is very likely that the regime forces may choose to adopt a scenario like Homs or Ghouta, whereby they besiege and blockade the rebel areas, slowly strangling them. The timing of all this seems to be calculated to make as many gains on the ground as possible ahead of the Geneva II talks, tentatively scheduled for mid-December.

No doubt, significant victories in Aleppo will strengthen the regime’s hand and give it more bargaining leverage as well as enabling it to make fewer concessions. In the past two days, the rebels seem to have regained some initiative, launching a fierce attack of their own on suburbs in west Aleppo toward the strategic Military Academy on the Damascus highway.

The people of Aleppo are understandably scared, especially those who live in the rebel eastern parts which are expected to bear the brunt of the fighting. The prospect of a large-scale war in their city just adds to the misery that is everyday life for the average Aleppan. The city has been largely without electricity for about a month, another result of the regime offensive, as retreating ISIS fighters stormed the undefended and previously “neutrally zoned” main power station outside Aleppo, expelling the workers and looting it.

It must be said, though, that many people here, not just regime supporters, are hopeful that this latest regime offensive might drive the rebels out of the city, or at least see them relinquish large parts of it. Fatima, displaced from her home in Bustan al-Qasr and now living with her elderly mother in a mosque in west Aleppo, explained her despair at the continued fighting. “We are tired, we want to go home, we just want it all to end. I don’t care if the regime wins, as long as I can go back to my house and live in peace,” she told Al-Monitor.

This sentiment, while widespread, is not universal as some residents fear reprisals from regime forces — especially militias — if they retake their neighborhoods. Ahmad, a friend and Sha’ar resident, told me that if the regime comes, he won’t be waiting around to find out.

The looming battle for Aleppo is set to be a ferocious one, even by Syria’s vicious civil war standards. A major shift in power on the ground here may well change the course of the entire war and shape any future political settlements.