A firsthand account of the devastating rebel siege of Aleppo that is depriving 2 million residents of basic supplies. 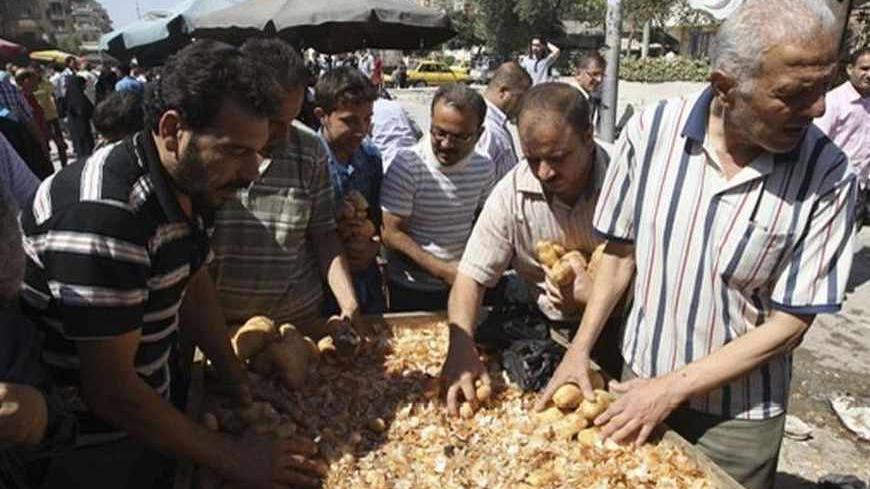 People buy potatoes from a street vendor on the first day of Ramadan, at the Karaj al-Hajez crossing, a passageway separating Aleppo's Bustan al-Qasr, which is under the rebels' control, and Al-Masharqa neighborhood, an area controlled by the Syrian regime, July 10, 2013. - REUTERS/Muzaffar Salman
Edward Dark
@@edwardedark
July 15, 2013

Everywhere you go, everywhere you look, sad eyes and tired faces. A broken city of deserted streets and empty shops, as a dejected population of almost 2 million is being slowly strangled to death. Both sides of the conflict lay the blame on each other, while the truth is that both are equally to blame, wagering the lives of so many in their deadly tug of war, one that has both metaphorically and literally torn this city and its people apart.

Staples like fresh food, vegetables, milk, bread and meat are in very short supply and priced out of the reach of most people. Fruit is now a luxury item, brand-name cigarettes are beyond the reach of any but the rich, the rest make do with dodgy generic-looking packs which taste and smell like burning sawdust. Driving a private car is only for the elite, as a full tank of gasoline now costs two months in wages for an average worker. Public transportation is very scarce, and at double or triple the normal price.

I doubt whether the most cynical of Aleppans could have ever, in their worst nightmares, envisaged what the state of Aleppo has become in the last week. A crippling, deadly siege, just as the holy month of Ramadan — a time of pious worship as well as seasonal culinary traditions in this most ancient and tradition-rich of cities — got under way. The main highway into the city, the Aleppo-Damascus highway, was closed due to clashes, as rebels launched a fresh offensive and took the Rashdeen neighborhood at the western limits of the city. This was a vital artery, supplying western Aleppo with all its needs: food, fuel, medicine and goods as well as passenger buses and coaches.

I borrowed my father’s car, since my car is — surprise — out of gas, to drive around the regime-held areas of the city, looking for any fresh produce to buy, as there were news and rumors on social media that supplies had been trucked in that morning. But as I drove from area to area, everywhere was the same story: A few scarce items such as potatoes, tomatoes and cucumbers were being sold at prices that would make a member of the French Louis dynasty blush.

I bought only the minimum to make a salad for my family’s iftar that day, a luxury I was so ashamed of that I quickly hid the bags away in the trunk. And as I asked around, some told me bitterly, “Yeah, sure the relief trucks came. The Syrian media filmed and photographed them, then they quickly left to be filmed elsewhere. The people standing around hopefully got nothing.” A disgusting farce. People in line at bakeries said regime troops came and took most of the bread, while others who had been standing for hours in the stifling summer heat got none.

Now the only option for the residents of besieged west Aleppo was the main crossing linking rebel-controlled east Aleppo with the regime-controlled west side. The Bustan al-Qasr crossing is aptly named the “death crossing,” as several people making the dangerous trip get picked out, seemingly at random, every day by regime snipers positioned on higher ground. As the siege started and food shortages took hold, people braved danger and crossed over to the rebel side to buy groceries to feed their families. They were beaten and humiliated by the rebels manning the crossing there, the paltry bags of food they had with them taken away or thrown on the ground.

“Let the regime feed you” or “Go lift the siege on Homs first” were some of the things shouted at them, as if those hapless people could ever have any influence on the regime’s crimes.

Several proclamations by the Islamic courts in the rebel areas as well as a huge sign over the crossing expressly prohibited the entry of food, milk or medicine into regime areas. The logic for this was to stop unscrupulous merchants from taking advantage of the lower prices on the rebel side and causing prices there to rise. Nevertheless, this became very controversial as food shortages hit the regime areas, and activists in rebel areas staged a protest at the crossing calling for the bans to be lifted.

The rebels manning the checkpoint met those protesters with violence, firing at them and attacking them with knives, killing at least one and injuring several. This caused a backlash, and most rebel battalions as well as the Islamic courts quickly distanced themselves from those rebels and eased the ban to allow people to carry across limited amounts of vegetables but no meat, milk or eggs. Some people took desperate measures to smuggle food across, some taping meat to their legs or stuffing eggs into their pockets, others trying to smuggle goods out in a TV set. What made this whole ordeal even more humiliating was that the crossing was also manned by some non-Syrians. So basically, a foreigner was prohibiting the people of Aleppo from carrying food across their own city, and hurling insults at them, too.

Afterward, the crossing would sporadically allow people to carry food across at what seemed to be the whim of whatever rebel group happened to be manning the crossing at that time. A neighbor who braved the crossing to buy some vegetables told me of how, as they were running across the 100 meters or so of no-man’s-land beyond the crossing, a regime sniper shot an elderly woman in her neck. The people hit the ground and remained pinned down for half an hour. As her husband tried to reach her, he was shot, too. Truly, making a salad in Aleppo could cost you your life.

And so the people of Aleppo remain stuck in this most deadly of paradoxes, caught between the hammer and the anvil, with both sides more than willing to see them starve to death, to achieve whatever sinister goals they have in mind. The rebels — who are supposedly fighting for the freedom of all Syrians — dismiss the residents of west Aleppo as shabiha and regime sympathizers, even though anyone with half a brain knows that the rebel- and regime-held parts of the city are arbitrary and most certainly do not delineate the allegiance of the people who happen to live there. The regime, cynical as ever, does not care about the fate of its own people, and would happily see them die in its campaign to eradicate the “terrorists” or gain a propaganda boost and blame the other side.

On a final and sad note, one of our neighbors, displaced from her home in a frontline area, begged us for some milk to give to her crying infant son. We had none, so we gave her some yoghurt, which she diluted with some water and sugar. The infant lightened up and smiled, but how many other infants will cry and sleep with empty bellies in Aleppo tonight?