Residents of Aleppo have moved beyond the initial shocks of war and are adjusting to make ends meet. 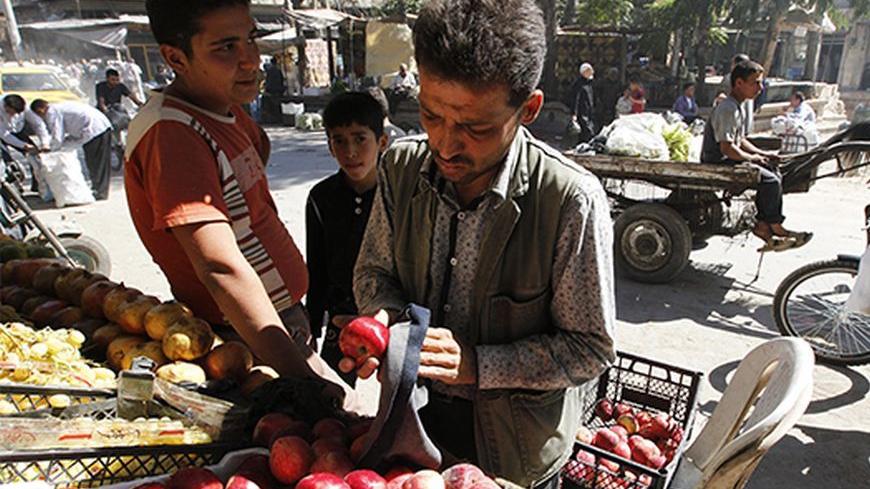 ALEPPO, Syria — Bazaars or souks, known locally as the "medina,” have for centuries been the nerve center of commerce in the city and a hub for traders from far and wide. Right up until Aleppo was stormed by rebels in July 2012, most prominent industrialists, businessmen and wholesalers had their main offices there.

As the conflict came to Aleppo and rebels took half the city including most industrial zones, the economy went into shock. Most factories shut down, and souks became war zones. It was a rude awakening for the residents and their dependents, the overwhelming majority of whom were either directly dependent on the commerce and industry sectors, or supplementary sectors such as services, transport and retail.

Consequently, most people found themselves out of a job and living off their savings. The rich fled, the well-to-do stayed at home and the working class suffered greatly. After the initial shock wore off, and people got used to living in a war-torn city, their natural instincts kicked in.

High inflation and rising costs plus the need to provide for themselves and their families drove some to find new and ingenious ways of making a living. The displaced started first, setting up impromptu fruit and vegetable stands on the pavements just outside university dorms and schools, much to the dismay of the affluent residents of those areas.

Soon small business owners followed suit. Those with shops in conflict zones and frontline areas took their merchandise out and set up stalls on roadsides in safer areas. Street vendors and stalls were nothing new to Aleppo, but this was on a completely new scale and level. Roadside businesses sprang up everywhere in west Aleppo. Entire street markets with hundreds of stalls appeared overnight, selling anything from socks and underwear to consumer electronics. You name it, and you will find it being sold on an Aleppo sidewalk: food, makeup, homemade detergents, biscuits, cigarettes, perfume, clothes, mobile phone repairs, plumbing and electrical supplies and toys. Even butchers and barbers set up shop on the streets.

Makeshift fast-food joints sprang up, too, selling cheap falafel sandwiches and french fries, but with no health and safety inspections they pose a potential risk to public health. Some of the more industrious entrepreneurs set up corrugated iron shacks, siphoning off power from the grid. They set up car repair and paint shops, sold car accessories or even construction supplies. No electricity? No problem! Business owners put homemade generators in the street and produced their own power. Some people even converted old Volkswagen Beetle vans to serve espresso coffee or run small cafes.

The richer businessmen or shopkeepers in the safer areas converted their stores to trendy cafes or grocery shops — the only real necessities people seemed to need in times of war. Pretty soon, there was a cafe on almost every street in west Aleppo.

The authorities initially allowed this to happen, but later on banned any illegal permanent or semipermanent structures, and removed stalls from most neighborhoods, citing security and public nuisance concerns. Nevertheless, stalls still thrived in many places, and street vendors continued to prosper in this new war economy. Adel, who sells cheap children’s clothing on racks by the pavement of Nile Street, told Al-Monitor, “Business was very good in the run-up to eid because people were being careful with their money and looking for bargains.”

As the division between rebel-held east Aleppo and regime-held west Aleppo became more pronounced, different types of business opportunities began to appear. The crippling siege of west Aleppo and the subsequent shortages also provided a new and unique type of work for some.

Petrol stations were shut down immediately after the rebel assault, and the only gasoline for sale was on the black market, smuggled in from other cities or even crudely refined from oil in rebel-held areas. On almost every street corner in Aleppo, you will find the telltale symbol of a black market gasoline seller: a plastic container and a funnel.

In winter, some would also sell firewood or heating oil and butane gas canisters. The prices would vary depending on the intensity of the clashes in the city, the roads leading in and supply and demand. They would fluctuate anywhere between double to 10 times normal prices, but people had little choice. Very recently, after the military supply routes were used to send gasoline tankers to Aleppo, petrol stations reopened, but the queues went on for miles and took all day. That was a business opportunity for many. For a fee, you could pay someone to take your car and fill it up, it would still be a lot cheaper than paying black market prices.

When bread shortages hit because of the lack of flour, bakeries shut down, and those still functioning and subsidized were incredibly overcrowded, with queue times of several hours. A lot of people made their living this way; they would queue all day and sell whatever extra bread they were able to buy. I remember a mother and her daughter who did this at the Al-Razi bakery. They seemed to be well-groomed and well-dressed, and had just fallen on hard times. There was a separate, shorter queue for women, and for them buying and selling bread was their source of income.

Sami was a taxi driver who worked at a private cab company before the war. Back then, he would make a decent living on tips he got plus his basic salary. The company closed down as the conflict came to Aleppo, and he found himself with no income to feed his family. I recently spotted him selling bread and vegetables near the crossing on the regime side. He explained to me that was how he made his living now, by trading across the east-west divide. “I cross to the rebel-held east every morning, where prices are cheaper, and buy a few bags of bread, tomatoes and cucumbers to sell just outside the crossing on the west side to people who are too scared to go themselves. I even take orders from some people, for fruits and bananas, for instance. I don’t make much money, but at least I make it honestly. If anything is left over, my family eats it so there’s no waste,” he told Al-Monitor. This new profession, of having someone transport goods across the Bustan al-Qasr crossing between regime- and rebel-held Aleppo for a small fee is now known colloquially as mabarji.

This conflict has certainly changed the way people in Aleppo live and do business, and has created a unique economy in which unconventional work opportunities thrive. "Desperate times call for desperate measures" is a saying that Aleppo's residents are only too familiar with in their struggle to survive.