Both Syrian government forces and rebels are accused of rampant, systematic looting and robbery of civilian homes. 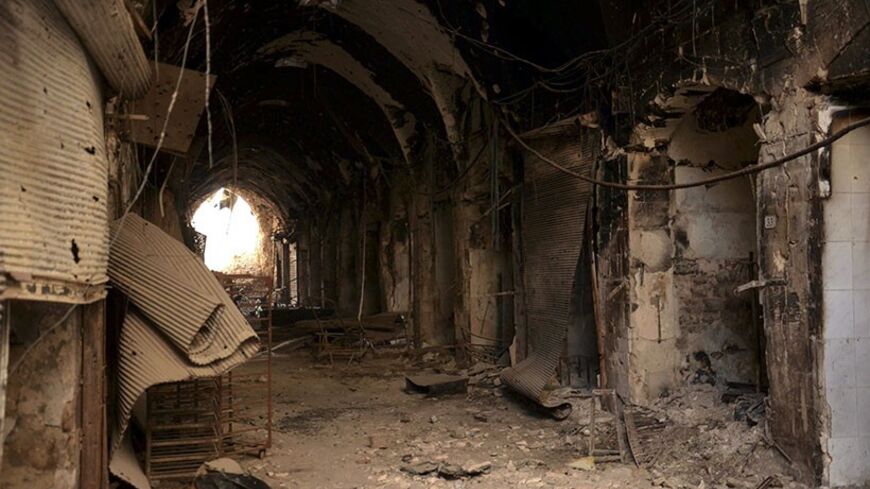 ALEPPO, Syria — To the victor go the spoils: That might be true for most other wars, but the Syrian conflict has proven to be far outside the established norms and conventions governing the conduct of battle. From the petty theft of armed highwaymen, to the systematic wholesale emptying of entire neighborhoods and industrial zones, in Syria the spoils are going to whoever has a gun, and there are plenty of those about.

While it is perhaps unremarkable to find small-scale opportunistic thieves and gangs operating in any conflict where lawlessness and chaos prevail, what has set the Syrian war aside is the sheer scale and organization of some of the brazen acts of thievery that have taken place.

As with most things in the messy quagmire that is Syria today, some acts of banditry have taken on sectarian overtones. Whether in certain cases this is due to the nature and makeup of the warring sides or the disputed territory in question is hard to tell, but as ever each side tries to stoke up even more hatred and bile toward its enemy by constantly fanning the putrid flames of sectarian animosity.

A glaring example of this would have to be the “Souk al-Sunnah,” or the Sunni Market, where it was alleged by some in the Syrian opposition that looted goods from the predominantly Sunni rebel-held neighborhoods of Homs were taken to be sold at knock-off prices by the mainly Alawi militiamen who looted them. These allegations have resurfaced time and again, although there is scant evidence to suggest that they are anything other than opportunistic looting by disorderly militiamen looking to make a quick buck, and not necessarily motivated by sectarianism.

In Syria, it’s always hard to tell, but I recall what one Baath Brigades commander told me late last year at what was then an abortive push into the rebel-held al-Belleramon and Bani Zeid areas of Aleppo. “We turn a blind eye, the men can take away whatever they can carry.” He then went on to complain about the very unruly pro-regime Popular Committees militia. “These guys just go straight in to steal, they don’t even wait for the fighting to finish, at least our guys earn it after a victory.” He didn’t seem apologetic or abashed about it, making it sound as if it was somehow normal. He even invited me along and said I could “help myself.” I declined his generous offer.

No wonder then that a spoof of the Syrian army’s slogan was coined, from “nation, honor, commitment” to “nation, furniture, washing machines” satirizing the army’s penchant to relieve neighborhoods they enter of household items.

Yet, this betrays the kind of mentality that rules those people doing the fighting in Syria, a complete disregard for the lives and property of ordinary civilians. This goes for both sides in the war. For their part, the Syrian rebels are guilty of widespread looting, including the organized, systematic theft of entire neighborhoods like Sheikh Maksoud in Aleppo, which saw teams of specialist car thieves drive off with hundreds of cars in the first few hours after rebels captured the area. They would go on to strip houses bare, then make off with their booty in large trucks destined for markets in nearby towns.

The organized, systematic looting of the al-Belleramon industrial zone in Aleppo was another glaring example of the impunity with which they operated. Some rebel groups would even call the owner to give him a chance to buy his machines and goods back before they were dismantled and carted off, sometimes across the border to be sold in Turkey. The latest rebel offensive into the Zahra area of west Aleppo has provided ample opportunity for thieves and looters, with each side blaming the other for robbing neighborhoods in plain sight, something that they were both undoubtedly doing.

Perhaps it is foolish and naive to believe that men thrown into mortal danger every day would settle for the meager pennies that pass off as salaries, and believe they are entitled to more than just breadcrumbs and scraps for risking life and limb. Maybe so, but it’s also quite clear that systematic looting is being used as a weapon of war. In the previous examples, rebels punished the businessmen of Aleppo for not supporting the uprising, and the regime punished the neighborhoods that gave sanctuary to rebel fighters.

This out-of-control war profiteering is unfortunately not confined to common thievery, and extends to the plunder of national treasures in historical dig sites, the illegal extraction and refining of crude oil and the exploitation of the shortages and dire circumstances of civilians in hotspots, especially in sieges. It is this last point that is especially abhorrent and repulsive, as it preys off people’s misery and need. Rebels in the Yarmouk camp, for example, have been accused of selling staples like rice for exorbitant prices, while regime officials and officers in Aleppo, through criminal networks, routinely sell siphoned-off gasoline, diesel and cooking gas whenever there are severe shortages. It was particularly contemptible when unscrupulous businessmen and officers took advantage of the 10-day water outage in mid-May to sell water in tankers at extortionist prices to the parched citizens of this hapless city. Others have set up their own large generators and are selling electricity by the ampere to those who can afford it, for Aleppo often goes days without power.

Quite a few stand to make a tidy profit from the war, leading some Syrians to suspect that certain areas and front lines are fixed. This was the feeling in Aleppo, at least while the Bustan al-Qasr crossing between the rebel and regime parts was still open. The rebels would charge a fee for anyone wanting to cross from their side, while regime troops would take bribes to look the other way as goods or people were smuggled across. This little arrangement kept them all happy, all except the people of course.

The fortunes of some are fast accumulating, while the rest of the nation languishes in dreary poverty and destitution, waiting for an end to the greed and hatred that fuels this seemingly never-ending nightmare.