How We Lost The Syrian Revolution

A Syrian activist in Aleppo laments the lost revolution as he reveals the sense of betrayal felt after rebels looted and ravaged his city. 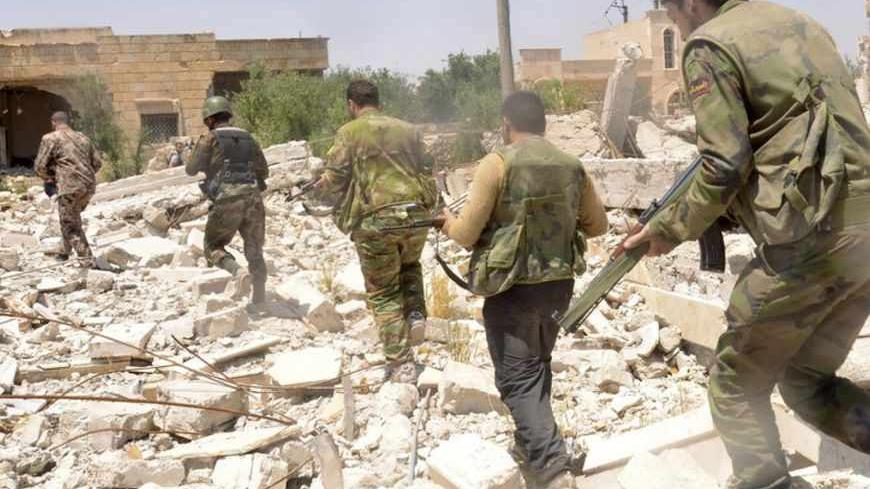 Forces loyal to Syria's President Bashar al-Assad carry their weapons as they move during what they said was an operation to push rebels from the road between Dahra Abd Rabbo village and Castello, in Aleppo, May 27, 2013. - REUTERS/George Ourfalian
Edward Dark
@@edwardedark
May 28, 2013

The simple answer to the above question is the miscalculation (or was it planned?) of Syrians taking up arms against their regime, a ruthless military dictatorship held together by nepotism and clan and sectarian loyalties for 40 years of absolute power. Former US ambassador to Syria Robert Ford specifically warned about this in his infamous visit to Hama in the summer of 2011 just as the city was in the grip of massive anti-regime protests and before it was stormed by the Syrian army. That warning fell on deaf ears, whether by design or accident, and we have only ourselves to blame. Western and global inaction or not, we are solely responsible for our broken nation at the end of the day.

Nietzsche once said, "Whoever fights monsters should see to it that in the process he does not become a monster.” That has proved to be very prophetic in the Syrian scenario. Away from all the agendas, whitewashing, propaganda, and outright lies of the global media stations, what we saw on the ground when the rebel fighters entered Aleppo was a far different reality. It hit home hard. It was a shock, especially to those of us who had supported and believed in the uprising all along. It was the ultimate betrayal.

Rebels would systematically loot the neighborhoods they entered. They had very little regard for the lives and property of the people, and would even kidnap for ransom and execute anyone they pleased with little recourse to any form of judicial process. They would deliberately vandalize and destroy ancient and historical landmarks and icons of the city. They would strip factories and industrial zones bare, even down to the electrical wiring, hauling their loot of expensive industrial machinery and infrastructure off across the border to Turkey to be sold at a fraction of its price. Shopping malls were emptied, warehouses, too. They stole the grain in storage silos, creating a crisis and a sharp rise in staple food costs. They would incessantly shell residential civilian neighborhoods under regime control with mortars, rocket fire and car bombs, causing death and injury to countless innocent people, their snipers routinely killing in cold blood unsuspecting passersby. As a consequence, tens of thousands became destitute and homeless in this once bustling, thriving and rich commercial metropolis.

But why was this so? Why were they doing it? It became apparent soon enough, that it was simply a case of us versus them. They were the underprivileged rural class who took up arms and stormed the city, and they were out for revenge against the perceived injustices of years past. Their motivation wasn’t like ours, it was not to seek freedom, democracy or justice for the entire nation, it was simply unbridled hatred and vengeance for themselves.

Extremist and sectarian in nature, they made no secret that they thought us city folk in Aleppo, all of us, regime stooges and sympathizers, and that our lives and property were forfeit as far as they were concerned. Rebel profiteer warlords soon became household names, their penchant for looting and spreading terror among the populace inducing far more bitterness and bile than what was felt against the regime and its forces. Add to that terrible fray, the extremist Islamists and their open association with Al-Qaeda and their horrific plans for the future of our nation, and you can guess what the atmosphere over here felt like: a stifling primordial fear, a mixture of terror and despair.

So who was “us,” and why did we feel that we were any different or better? Well, by “us” I mean, and at the risk of sounding rather elitist, the civil grassroots opposition movement in Aleppo, who for months were organizing peaceful protests and handing out aid at considerable danger and risk to our own lives. “We” truly believed in the higher ideals of social and political change, and tried to emulate them. We tried to model ourselves on the civil rights movement of the US in the 1960s, Mandela’s struggle against apartheid, and the teachings of Gandhi: precisely what similar civil movements in other Arab Spring countries such as Tunisia and Egypt had done before.

For “us,” a revolution was a slow, deliberate and committed struggle for change. Like water drops repeatedly beating down on a boulder, eventually we would break it. But for “them,” well, their idea of change was throwing a ton of TNT at that boulder and having it, and everything around it, blown to smithereens. "We,” well, we mostly came from the educated urban middle class of the city. We came from all walks of life, all sects and all areas, and we didn’t care.

We never asked where that guy or girl was from or what they worshiped. Each one of us gave and contributed what we could, in the capacity we could. The leader of our group was a young Christian lawyer, a very active and dedicated young woman. The rest of the volunteers in our group were a microcosm of Syrian society; veiled girls, Shiite boys, rich kids and poor working class all working together for ideals we strongly shared and believed in.

Over the course of our activist work, some of our group were jailed and injured, one was even killed. That is why it never hit home so hard, and never have I felt as sad as when, shortly after Aleppo was raided by the rebels, I received messages from some of those people I used to work with. One said, “How could we have been so stupid? We were betrayed!” and another said, “Tell your children someday that we once had a beautiful country, but we destroyed it because of our ignorance and hatred."

It was around about that time that I gave up on the revolution, such as it had become, and saw that the only way to Syria’s salvation was through reconciliation and a renunciation of violence. Many felt this way, too. Unfortunately, that is not a view shared by the warmongers and power brokers who still think that more Syrian blood should be spilled to appease the insatiable appetites of their sordid aspirations.

Even as activists, intellectuals, businessmen, doctors and skilled professionals fled the city in droves, others remained and still tried to organize civil action in the form of providing aid and relief work to the countless thousands of families that were now internally displaced inside their own city in desperate conditions. But it was clear that it was becoming futile. Everything had changed; it would never be the same again.

This is what it has come down to in Syria: It’s us versus them everywhere you go. Opposition versus regime, secular versus Islamist, Sunni versus Shiite, peaceful versus armed, city versus rural, and in all of that cacophony the voice of reason is sure to be drowned out. Whatever is left of Syria at the end will be carved out between the wolves and vultures that fought over its bleeding and dying corpse, leaving us, the Syrian people to pick up the shattered pieces of our nation and our futures.

Do we have recourse to blame anyone but ourselves for this? Was this our destiny, or the cruel machinations of evil men? Perhaps a future generation of Syrians will be able to answer that question.

Edward Dark is a pseudonym for a Syrian currently residing in Aleppo. He tweets at @edwardedark.