Pro-regime militias such as the Al-Quds and Baath Brigades are at the forefront of the battle against rebels in Aleppo, and they're mostly Sunni. 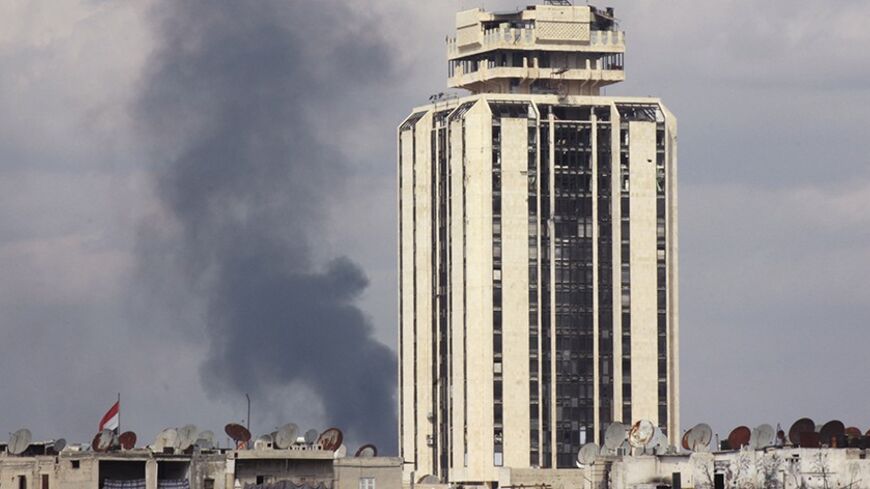 Smoke rises at the Karaj al-Hajez crossing, a passageway separating Aleppo's Bustan al-Qasr, which is under rebel control and Al-Masharqa, an area controlled by the regime, March 13, 2014. - REUTERS/Sultan Ketaz
Edward Dark
@@edwardedark
March 14, 2014

ALEPPO, Syria — This month marks three years of an uprising that has swept through Syria, leaving death and ruin in its wake. Aleppo has suffered 18 months of brutal, divisive conflict. The city now lies split, both in territorial control and along social, political fault lines.

The conflict in Syria has taken on many shapes as it mutated from a popular mass movement for political change into a proxy civil war with sectarian undertones. Each region of this land, a diverse tapestry with intricately interwoven social, ethnic and religious ties bound together with the strings of a shared history, has experienced the conflict in distinct ways.

Aleppo is perhaps unique in this respect, deviating from the standard Syrian model in that the conflict here follows the stratification of society along class and clan lines, rather than the general sectarian rift that delineates the conflict elsewhere. A large number of Sunnis from all backgrounds, including the working and rural classes, fight alongside the regime in militias or as willing conscripts. In other provinces, however, the split could be more or less described as halves of a once coherent social order split along purely confessional lines.

In Aleppo, the splits are more blurred. Needless to say, the entirety of the rebel forces — except for the foreigners fighting with the al-Qaeda affiliates — fighting under Islamist or mainstream groups are composed of poorer Sunnis from the countryside.

The urban fabric of the city was very cosmopolitan and home to a large minority of Christian, Armenian and Kurdish constituents, which, along with the prosperous Sunni bourgeoisie, initially rendered the city immune to the revolutionary fervor that swept through large swathes of the country. The majority of rural Aleppo, though, identified with the broader uprising, through shared feelings of religious or economic persecution by the ruling order. Such conclusions are very convenient, but they don’t satisfactorily answer many pressing questions, nor do they accurately describe the nature of the conflict on the ground.

This Sunni-Sunni split in Aleppo seems to defy explanation. It is easy to see how the bourgeois Sunnis of Syria’s commercial capital can see their interests better represented by the regime, but how can we account for the very real fact that the powerful pro-regime militias that have made such significant gains were drawn from the less privileged Sunni classes? What could explain certain Sunni towns and villages in the Aleppo countryside — Jibreen, for example — being staunchly pro-regime while the majority of rural Aleppan Sunnis are vehemently allied with the opposition? It’s easy enough to understand why the villages of Nibol and Zahra are loyalist and their men volunteer to fight for the regime, as they’re predominantly Shiite, but the Nayrab Palestinian refugee camp is Sunni, and its men have formed their own militia, the Al-Quds Brigades.

They fight alongside other local pro-regime militias, such as the National Defense Force, which is also mostly Sunni and drawn from loyalist villages as well as clans like the Berri — whose leader Zeno was infamously executed in a hail of bullets as rebels first stormed Aleppo summer of 2012. They have been at the vanguard pushing rebels back from the Aleppo airport into Marjeh. It is also interesting to note that just like Nibol and Zahra, the Nayrab refugee camp had also been under siege by the rebels until very recently, and that only added to the camp's fury. The most likely explanation is a complex mix of tribal and clan loyalties, as well as a deeply ingrained sense of nationalism.

Another decisive factor that may go far to explain the predominance of Sunni fighters with regime forces in Aleppo was the unprecedented early 2013 decree allowing conscripts from Aleppo to serve their mandatory military service inside the city itself, and optionally with a loyalist militia of their choice. The regime had always mandated that conscripts serve in regiments well away from their home towns, a rule that never had any exceptions until the current crisis. It seems to have paid off well. Instead of simply deserting, many young men chose to serve their tour of duty in Aleppo. They could even go home at night and sleep in their own beds, something unheard of in the Syrian military.

This greatly swelled the ranks of loyalist militias such as the Baath Brigades. Serving there was seen as easier and paid a higher salary, drawing many conscripts. The Baath Brigades, initially a small militant band made up of longtime Baath Party loyalists and members, soon found its numbers and strength increasing, becoming the second most powerful regime unit in Aleppo after the elite Republican Guard. Entrusted with high profile and sensitive military tasks, they have proven more than capable, recently spearheading the assault on the old city, where they captured strategic areas though suffering heavy losses.

The Baath Brigades was definitely the success story of this new conscription strategy, but it also sharply illuminated the disparity of the sectarian narrative in the Syrian conflict with regard to Aleppo. The Baath Brigades were almost entirely Sunni. Nothing quite highlights this as well as the story of a young conscript named Mahmoud Hamandosh. Hamandosh, 19, was well known in the brigades for his exceptional bravery on the battlefield. More than once he rescued his comrades and superiors after they were surrounded.

Hamandosh died in January from a bullet to the head, just as he and the Baath Brigades had pushed into the old city and taken the Farafra area. His funeral was attended by top officials to much fanfare. The striking aspect about Hamandosh is that he hails from Anadan, a town just north of Aleppo and heavily pro-rebel. In fact, one of the most infamous rebel warlords, Ahmad Afash of Ahrar Souria, hails from there.

Hamandosh was a Sunni, and his story is far from unique. In the mess that has become the Syrian civil war, the lines of conflict are blurred and ill-defined. As is often the case in civil wars, the division cuts at the heart of society and family. Your neighbor, your brother or your best friend might be the one pointing the barrel of their gun at you.