Syrian civilians, routinely shelled by regime forces and rebels, hope the Homs cease-fire is an indication of better times to come. 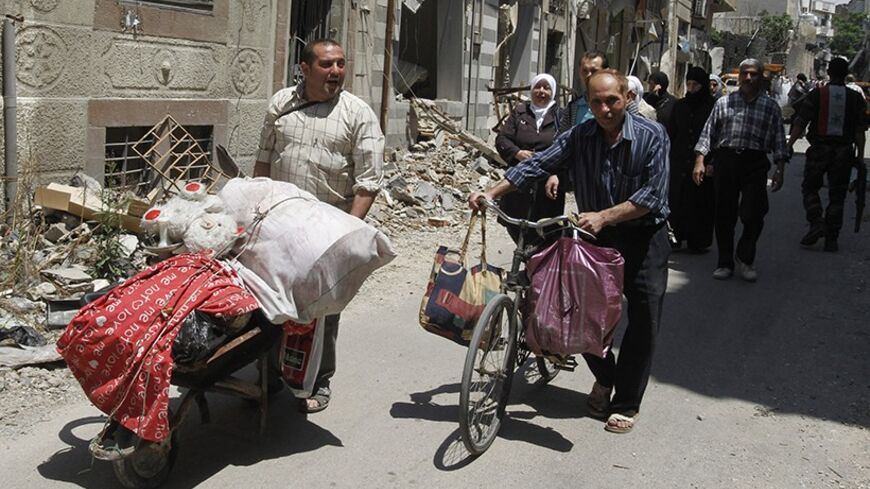 Residents carry belongings from home following the cessation of fighting between rebels and forces loyal to Syria's President Bashar al-Assad in Homs, May 10, 2014. - REUTERS/Khaled al-Hariri
Edward Dark
@@edwardedark
May 13, 2014

ALEPPO, Syria — A startling new phenomenon has begun to emerge in the protracted Syrian civil war and has solidified as a systemic tactic used liberally by both sides of the conflict: the deliberate targeting of innocent civilians. Aside from the obvious sectarian dimension of some of the violence, usually a Syrian’s only crime is to be unfortunate enough to be a resident of a targeted town, village or neighborhood, and automatically assumed to be a base of support for whichever side controlled that area. This, of course, is an irrational way to conduct a war, as the strategic goal should be to win as much popular support as possible without alienating any significant portion of the population. Nevertheless, the warring sides in Syria seem to have decided that exacting terrible vengeance and retribution on the innocent is the most convenient way to vent their anger and hatred.

A case in point that clearly illustrates the ludicrous nature of this inhumane conflict is what happened to the Sheikh Maksud neighborhood in Aleppo. When the neighborhood was still controlled by the regime of President Bashar al-Assad, it was regularly shelled by rebels from the nearby Bustan al-Basha area, under the pretext that it was home to pro-regime militias. The casualties were mostly civilians. Later, when the rebels stormed the neighborhood and took it over in March 2013, it was the regime that did the shelling, and once again the victims were overwhelmingly innocent people.

That both sides saw nothing illogical about shelling the same area with exactly the same civilians under the pretense that they were traitors speaks volumes about the demented mentality of the people running the show. What’s even worse than the absurd, murderous rampages that the parties to this conflict seem to enjoy inflicting on their fellow countrymen are their hard-line supporters, who call for even more violence against civilians, a sign of the dehumanizing effect this conflict has had on people. For example, one pro-regime group calls for using the remaining 7% of chemical weapons not yet handed over to to “cleanse” east Aleppo, while another rebel supporter encourages a rebel artillery operator asking for coordinates to just fire anywhere in Aleppo, saying it’s all a valid target.

Another war crime that has become all too familiar is the siege and deliberate starvation of entire towns or areas controlled by the opposing side. The regime sieges of Ghouta, Homs and Yarmouk are infamous, but not much has been said about the rebel siege of the two Shiite towns of Nibol and Zahra in Aleppo’s northern countryside, or the May 3 rebel decision to cut off the water supply to 3 million people in Aleppo city. Needless to say, the residents of Aleppo are absolutely livid at the rebel Sharia Council, which cut off the water supply at the main pump station at Suleiman al-Halabi, and then later attempted to resume the supply only to rebel-controlled areas. At the time of writing, west Aleppo has had no water for 10 days and concerns of a looming major humanitarian catastrophe are growing as people drink polluted water and diseases may start to spread in the rising heat. This self-defeating action by the rebels has only served to further alienate the populace, and has no clear purpose other than to punish and further compound the suffering and misery of a helpless city brought to its knees by 21 months of constant fighting and chronic shortages in a disintegrating infrastructure.

The heinous actions of both parties in this conflict can only be described as collective punishment and acts of terrorism against innocent civilians. That this violence is repeatedly committed with blatant impunity highlights spectacularly how the international community has failed the Syrian people. With no clear framework for impartially investigating these crimes and bringing the culprits to justice, they will continue to extract a deadly toll on the innocent.

Syrians are no longer under any illusions as to what this civil war is really about. It’s not about fighting terrorism, nor is it about toppling tyranny. Instead, it’s a cynical power struggle with them as unwilling pawns. They’ve seen firsthand how both sides have used them as human shields, bombed them, starved and abused them all the while chanting the same empty rhetoric about how each is saving the Syrian people from the terror and oppression of the others, albeit in subtly differing flavors of deception. Any Syrian picking sides now is just choosing the lesser of two evils.

That most Syrians have come to this stark realization after three years of war is a sobering wake-up call. A new pragmatism is sweeping over this war-weary nation and its people, even its foot soldiers on the ground, reflecting an overwhelming desire to stop the war and bloodshed by any means possible. This newfound realism and rationalism, born of the perpetual drudgery of war, culminated in what may very well be a watershed moment in the Syrian conflict.

The negotiated withdrawal of rebels from the old quarters of Homs and the subsequent return of some of its inhabitants is a significant turning point in more ways than one. It proved that productive negotiations on the ground are possible, even between the bitterest of enemies, and that perhaps the way forward in Syria is not the grand Geneva talks, but a series of locally brokered agreements reached by Syrians themselves.

Most importantly, it proved that the collective will of the Syrian people for an end to fighting will ultimately prevail. While regime loyalists viewed it as a victory for their side, the opposition activists were busy lamenting their great loss. The reality, though, was that neither side had won or lost. It was in fact a victory for the people of Homs, and Syria as a whole. That common sense and the will of the people could prevail over guns offers a glimmer of hope in this otherwise bleak and hopeless conflict. The point was poignantly driven home by the images of residents returning to their battered neighborhoods in old Homs.

Amid all the heartbreaking destruction and devastation, their faces portrayed a defiant will to live and a burning desire to repair and rebuild what was so cruelly desecrated by a futile and bloody war. Homs, once dubbed the capital of the Syrian revolution, might now find itself in a new role: Homs, the capital of reconciliation. Let’s hope so, for all of Syria’s sake.