US should test Iran on Syria

The United States and Iran can build on shared interests in combating al-Qaeda and terrorist groups, disarmament of Syria’s chemical weapons and opening humanitarian aid corridors. 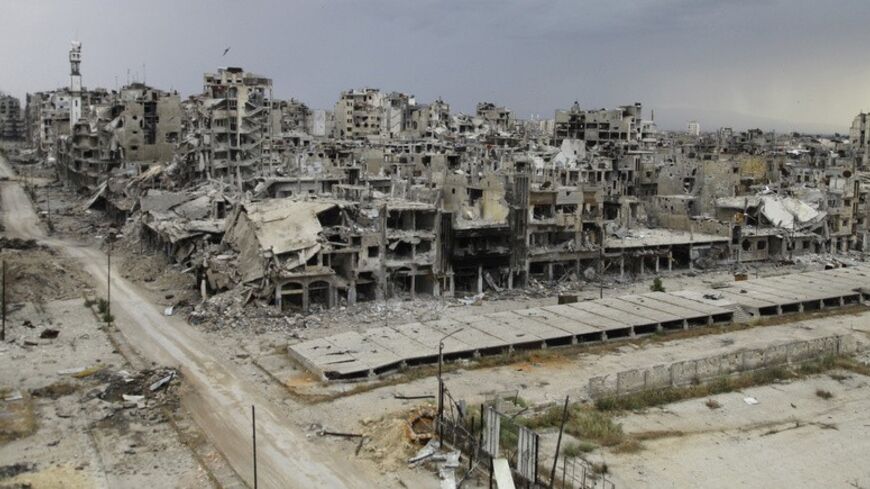 Destroyed buildings are pictured, after the cessation of fighting between rebels and forces loyal to Syria's President Bashar al-Assad, in Homs, May 10, 2014. - REUTERS/Ghassan Najjar

US Secretary of State John Kerry said on May 15 that “the grave humanitarian crisis is growing more dire by the day” in Syria and promised new efforts to get aid to besieged Syrians, including alternatives to working through Damascus.

His remarks came two days after Lakhdar Brahimi, the Joint United Nations-League of Arab States special representative for Syria, resigned from his post, saying he was “very, very sad to leave Syria in such a bad state.”

The urgency of Syria’s crisis might compel Kerry to pick up Iran’s signals on Syria, and to consider the precedent of localized cease-fires, such as the one negotiated in Homs this month by Syrian government officials, opposition leaders, and Iranian, Russian and UN diplomats, as discussed in this column last week.

While Iran is the number one backer of Syria’s President Bashar al-Assad, Tehran has also consistently advocated international cooperation against al-Qaeda and related groups; disarmament of Syria’s chemical weapons; and humanitarian relief and aid corridors, which are all shared interests with the United States.

In September 2013, in an exclusive interview with Al-Monitor, Iran Foreign Minister Mohammad Javad Zarif endorsed the US-Russia framework agreement on chemical weapons and said that Iran sought to prevent Syria from becoming a base for extremism in the region. Zarif warned of the uncertain prospects for the Geneva talks, absent Iran’s participation. “They can test it in Geneva to their own detriment,” he said.

In February this year, Alireza Miryousefi, an Iranian diplomat at the Mission of Iran to the United Nations, writing for Al-Monitor, argued for urgently addressing the rise of extremist groups in Syria, while noting Iran’s constructive role in “the issue of chemical disarmament, which has been widely covered, as well as Iran’s mediation role in establishing aid corridors to remove civilians from the conflict zones in Syria and send[ing] humanitarian assistance.”

In March, Iran Deputy Foreign Minister Hossein Amir-Abdollahian laid out a four-part plan for Syria that included international cooperation on terrorism; humanitarian assistance; a role for the United Nations; and “reinforcing the political track” in Syria with comprehensive talks.

Just days before the Homs agreement this month, at a meeting in Tehran, Zarif told Peter Maurer, the head of the International Committee of the Red Cross (ICRC), that Iran was determined to expand its cooperation with the ICRC.

And just this week, Hossein Gharibi, an Iranian diplomat at the United Nations, and Alireza Ahmadi, wrote, "Fighting extreme takfiri groups openly under al-Qaeda's central command should be the top priority for all parties because of its moral urgency and because it can bring together all parties in a common cause. It can serve as a platform to unite the international community and create fertile ground for a diplomatic resolution to the conflict."

The former UN/Arab League Special Representative for Syria, Lakhdar Brahimi, told both Al-Monitor and the UN Security Council that a four-point plan proposed by Zarif for a political solution in Syria, including the withdrawal of foreign fighters from the country, is "worth discussing."

This column in January identified counterterrorism and humanitarian relief as pillars of a new pulse of the Geneva II talks on Syria, and perhaps now the basis for another diplomatic initiative.

Putting Iran to the test on counterterrorism, disarmament and aid corridors in Syria, if nothing else, might be a good next step before considering some of the costly and uncertain alternatives being suggested, including complicated humanitarian workarounds, given that successful aid deliveries ultimately require local cease-fires, like the one negotiated in Homs, which means the cooperation of Damascus, Tehran and Moscow; exporting sensitive anti-aircraft weapons to moderate Syrian opposition forces, given that terrorist groups such as Jabhat al-Nusra and the Islamic State of Iraq and al-Sham (ISIS) hold sway in many areas; and readying our own guns in case Syria defaults on its disarmament obligations, despite the lack of popular support for US military involvement in Syria.

Edward Dark, writing from Aleppo this week, provides some realism, away from the politicking on Syria in Washington and London, about how Homs, as imperfect and limited as it may seem, might even be a “turning point” for Syrians desperate for an end to the war:

"The heinous actions of both parties in this conflict can only be described as collective punishment and acts of terrorism against innocent civilians. That this violence is repeatedly committed with blatant impunity highlights spectacularly how the international community has failed the Syrian people. With no clear framework for impartially investigating these crimes and bringing the culprits to justice, they will continue to extract a deadly toll on the innocent.

"Syrians are no longer under any illusions as to what this civil war is really about. It’s not about fighting terrorism, nor is it about toppling tyranny. Instead, it’s a cynical power struggle with them as unwilling pawns. They’ve seen firsthand how both sides have used them as human shields, bombed them, starved and abused them all the while chanting the same empty rhetoric about how each is saving the Syrian people from the terror and oppression of the others, albeit in subtly differing flavors of deception. Any Syrian picking sides now is just choosing the lesser of two evils. …

"The negotiated withdrawal of rebels from the old quarters of Homs and the subsequent return of some of its inhabitants is a significant turning point in more ways than one. It proved that productive negotiations on the ground are possible, even between the bitterest of enemies, and that perhaps the way forward in Syria is not the grand Geneva talks, but a series of locally brokered agreements reached by Syrians themselves."