Turkish Prime Minister Recep Tayyip Erdogan follows through on his threat to shut down Twitter, as Saudi Arabia and Qatar also crack down on social media; US-Russia collaboration on Syria and Iran is so far holding on, despite tensions over Ukraine. 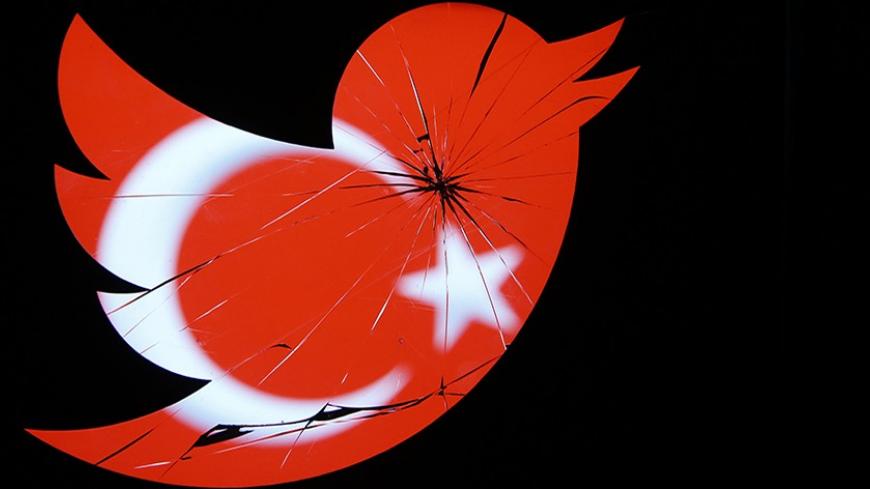 A Turkish national flag is seen through a broken Twitter logo in this photo illustration taken in Zenica, March 21, 2014. - REUTERS/Dado Ruvic

This week, Turkish Prime Minister Recep Tayyip Erdogan followed through on a controversial Internet law by banning the use of Twitter in Turkey ahead of local elections on March 30.

A State Department spokeswoman said on March 20, “We remain very concerned by any suggestion that social media sites could be shut down,” as reported by Laura Rozen.

Al-Monitor’s Cengiz Candar, Semih Idiz, Pinar Tremblay and Tulin Daloglu have covered the controversy around the expansive Internet law and its links to the allegations of corruption against the government.

On this worrying trend, Abeer Allam writes this week for Al-Monitor how Saudi Arabia is also cracking down on activists on social media, and Matt Duffy reports on the concerns of journalists about a pending cybercrime law in Qatar.

The contributions by Allam and Duffy are part of Al-Monitor’s new Gulf Pulse, which was formally launched this week.

US-Russia collaboration in the Middle East is so far holding together, but could be victim to further deterioration in Russia’s ties with the West over Ukraine.

On March 19, Sergei Ryabkov, Russia's deputy foreign minister and envoy to the Iran talks, warned of possible “retaliatory measures” with regard to Russia’s position on Iran if there are further sanctions on Russia.

That same day, a statement from the Russian Ministry of Foreign Affairs criticized the United States for reducing its diplomatic contacts with Syria.

“It turns out that the goal of overthrowing the regime in Damascus prevails over the tasks of assisting in the chemical demilitarization of the SAR [Syrian Arab Republic] and assisting millions of Syrians, who have suffered in the armed conflict. These tasks cannot be solved without immediate interaction with the Syrian government,” the statement read.

US-Russia cooperation would be an unfortunate casualty of the crisis in Ukraine, given the stakes in Iran and Syria, and an otherwise good week for multilateral diplomacy.

A senior US official said that the P5+1 negotiations with Iran in Vienna this week were “respectful, professional and intense” and “focused on several key substantive issues,” adding that Russia’s engagement in the talks was not affected by Ukraine.

The Organization for the Prohibition of Chemical Weapons-UN Joint Mission reported on March 20 that the third delivery of chemical weapons material in a week raised “the amount of Syrian chemicals that are now out of the country to nearly half of the total stockpile.”

Vitaly Naumkin warns, however, that the United States can expect a more assertive Russian President Vladimir Putin in the Middle East, if the crisis over Ukraine and Crimea does not de-escalate.

“In Moscow, it is not considered a coincidence that it is now, when Russia has decided to bring Crimea and the city of Sevastopol into the Russian Federation, that President Barack Obama has announced the closing of Syria's diplomatic missions in the United States,” writes Naumkin. “This is interpreted as a signal that the American administration is pursuing a tougher policy with respect to Damascus, and that Washington is very likely to move away from cooperation with Moscow in resolving the Syrian crisis.”

Paul Saunders adds that Russia will stay focused on its core economic and security interests during the standoff with the West over Ukraine.

“Saudi Arabia and Syria are Russia’s principal security concerns in the Middle East; Moscow’s pre-eminent security interest is in minimizing its own domestic terrorism problem, which means supporting a strong Syrian government that can crack down on extremists and discouraging Saudi and other financial support, whether official or otherwise, for al-Qaeda-connected opposition groups in Syria and extremists in the former Soviet Union,” Saunders writes. “Russia has long viewed Saudi Arabia and Qatar as key sources of support for Chechen militia groups.”

The worries about blowback from Ukraine on the Middle East came as the UN updated its most recent grim report on the humanitarian cost of the conflict, stating, “Compassion does not and should not suffice. A negotiated political solution, which the commission has consistently held to be the only solution to this conflict, must be pursued with renewed vigour both by the parties and by influential states.”

The threat of spillover from the Syria war this week was greater than ever.

Ben Caspit writes that while most Israeli “defense establishment professionals believe that Assad is the lesser evil” relative to “jihadist and al-Qaeda groups that swarm Syria and fight the regime, … Israel has also drawn up a new map of red lines and a balance of terror and deterrence vis-a-vis Assad and Hezbollah. And, according to foreign sources, it continues to strike any game-changing convoys consisting of weapons such as rockets, missiles or improved radar systems, which are en route from Damascus to Beirut.”

Akiva Eldar made a passionate case for Israel taking a pro-active stand to address the humanitarian crisis in Syria in the context of a broader regional strategy supporting peace and stability.

In Lebanon, there was a wave of anxiety after Syrian forces re-took Yabrud on Lebanon’s eastern border, dealing a devastating blow to those Syrian rebel forces supplied through Lebanon. Many rebel fighters fled across the border into Arsal. There was a car-bombing in Baalbeck on March 16, and many feared the sectarian tensions in Tripoli could go from bad to worse.

The potential for an escalation of Syria-related violence in Lebanon may have spurred the country’s leaders to put aside long-standing political differences to address the spillover of sectarian terrorism, although the effectiveness of Lebanon’s security forces in meeting the challenge may be an open question.

Jean Aziz reports, “Politicians have told Al-Monitor that contacts are underway between Christian leader Michel Aoun and the most powerful Sunni leader, former Prime Minister Saad Hariri, to discuss this issue, whereby there would be an agreement to simultaneously publicly present identical positions calling on Lebanese authorities to resolve matters on the ground, especially in the north and the Bekaa Valley.”

The urgency of the Syria crisis was the impetus for the visit of Lakhdar Brahimi, the special representative for Syria of the UN and the Arab League, to Iran.

On March 18, Iranian Foreign Minister Mohammad Javad Zarif told Brahimi that Iran “is ready to help resolve the humanitarian crisis in Syria.” Zarif further explained “the role of the Syrian government and President Bashar al-Assad in restoration of stability and security to the country” and called for “preparations for holding fair elections to pave the way for the people from all walks of life to decide their political fate,” according to Iran’s Foreign Ministry, while warning that “terrorism in Syria may spread to the regional countries” and that a “campaign against terrorism and extremism needs collective cooperation of the regional countries.”

In a separate meeting that day, Iranian Deputy Foreign Minister for Arab and African Affairs Hossein Amir-Abdollahian told Brahimi, “The key to resolving the Syrian crisis is border control measures to stop arms trafficking and the infiltration of foreign-backed militant groups."

Amir-Abdollahian explained Iran’s approach to Syria in an exclusive article for Al-Monitor earlier this month.

This column has consistently noted the centrality of Iran to any political solution in Syria, and, on Jan. 12, 10 days before the launch of the Geneva II conference, wrote that the “new pulse” of Geneva II would emphasize more intensive cooperation on humanitarian assistance and development of a regional counterterrorism strategy, since the prospect of Assad negotiating his exit from office was not a realistic objective and has been borne out by the talks.

Those now arguing to ditch diplomacy with Russia over Syria because of its support for Assad and its actions in Ukraine might explain how you navigate a political transition, or humanitarian aid, without the assistance of Moscow, or Tehran, and without dealing directly with the Syrian government.

The real-life implications of the high moral ground of the regime-change approach to Syria unfortunately condemns Syria and the region to more war, suffering and terrorism.

There is also an analytical flaw that regime change is even a realistic assumption, given the staying power of the Syrian regime and its recent military victories, as relayed by past and present US officials.

Former US envoy to Syria Robert Ford said this week that “the regime at its center has a certain unity and coherence” relative to the opposition that may have been underestimated early on, a point similarly made by US Director of Central Intelligence John Brennan early this month (reported here by Barbara Slavin).

Ford also dismissed the "narrative" that the United States might have knocked-off the Assad regime in 2012 with limited military support for the opposition, saying that the opposition was not well organized at that time, and the most likely outcome would have been a political vacuum, as Slavin reported from Washington.

Ford added that the United States has “not had a serious discussion with the Iranians ever about Syria to identify their core interests. I cannot imagine that the Iranians are anxious to see al-Qaeda sink deeper roots into the eastern three-quarters of Syria. But is that enough to build agreement on an outcome? That’s less evident to me.”

Brahimi's visit to Iran may be a sign that that overdue discussion may finally be taking place.