The al-Qaeda-affiliated Islamic State of Iraq and al-Shams has won the praise of Aleppans after expelling criminal gangs that have looted and ravaged the city. 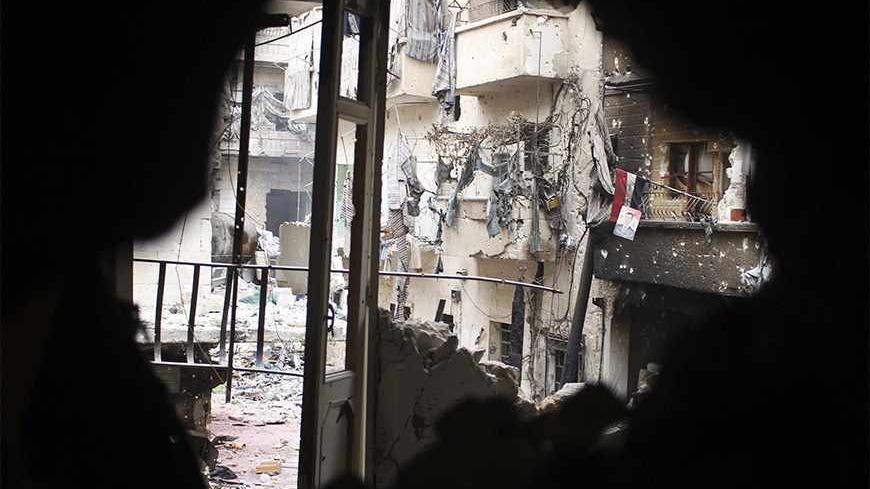 A picture of Syrian President Bashar al-Assad and a Syrian flag are seen from a hole in Aleppo, Nov. 7, 2013. - REUTERS/Molhem Barakat
Edward Dark
@@edwardedark
November 11, 2013

ALEPPO, Syria — Khaled Saraj, better known as Khaled Hayani, is a notorious rebel warlord operating in and around Aleppo. He’s a native of the town of Hayan — hence, his nickname — just a few kilometers on the Gaziantep highway north of Aleppo. He was largely unknown from his impoverished background right up until the armed conflict erupted in Aleppo province. Soon after, he formed his own militia, the Martyrs of Badr, and through various unsavory activities quickly amassed a small fortune, all in the name of the revolution and fighting against the Syrian regime.

His infamy stems from his well-documented escapades, including organized looting, kidnapping, extortion, highway robbery and indiscriminate shelling of civilians adjacent to areas his faction controls with his improvised and lethal Jehanem (Hell) canon. Along with several other warlords now infamous throughout Aleppo for their reign of crime and terror, he stands out as particularly noxious for his undisguised contempt for the city of Aleppo and its residents.

His more outrageous crimes were carried out in the industrial zone of Liramoun, on the northern outskirts of Aleppo, where his men systematically looted factories and warehouses, often driving off with tons of goods in large trucks. They even dismantled factory machinery, shipping it off across the border to Turkey to be sold to unscrupulous dealers for a fraction of its worth. This, as you can imagine, caused great consternation and bitterness across the city, an important industrial hub in the region. He is even reported to have called factory owners, offering to sell them back their stolen goods at a discount, adding insult to injury.

But the crime he is perhaps most notorious for is the storming and subsequent mass looting of the Shiekh Maksud neighborhood. Residents there reported that straight after his men took the area one morning around dawn, dozens of car thieves arrived in pickup trucks and proceeded to calmly break into and drive off with all the parked cars, none of which were left by that afternoon. As he consolidated his control, he would also reportedly auction off entire buildings or blocks to the highest bidder. You pay his fee, get your men and trucks in, then steal whatever you wanted from the houses. Refrigerators, washing machines, TVs, furniture, clothes — anything you could carry. The unwillingness or perhaps the inability of other “good” rebel factions to do anything about his crimes has done much to damage and discredit the rebel fighters as a whole in Aleppo.

It should come as no surprise, then, that the people of Aleppo are more than happy to see him go, even if it is at the hands of the al-Qaeda-affiliated Islamic State of Iraq and al-Shams (ISIS). The group has already dispatched with another notorious warlord, Hasan Jazara, captured in the Sakhur neighborhood along with some of his men as ISIS swept into several areas of Aleppo late last month. He has reportedly been sentenced to death for his crimes. His execution was to be held Oct. 31, but there has been no confirmation that it was carried out. ISIS, for its part, has been playing a clever and slick media campaign, claiming that it is purging the rebel fighters of traitors, collaborators and criminals. After taking over the border town of Azaz, destroying the rebel faction Asefet el Shamal (the Northern Brigades) for allegedly collaborating with US and German intelligence, ISIS has now set its sights on other strategic areas in Aleppo, rooting out rival militias it accuses of criminal activity.

ISIS has released several statements, pictures and videos online to back up its claims. After seizing the Aleppo neighborhoods of Bustan el Basha, Masaken Hanano and Hulok, the group released this carefully edited propaganda video of residents being interviewed, all claiming they were happy the criminal rebels were ousted and that ISIS is now in control.

In going after Hayani and his men, ISIS stormed his hometown, captured some of his closet associates and then launched a manhunt for him. He is reportedly now in hiding, in either Sakan el Shababi or Bani Zied, both areas under rebel control in Aleppo. As ISIS seizes more of his checkpoints, he is now reportedly on the run and surrounded. Several other rebel factions have come to his aid, and clashes in those areas remain fierce. One of the main checkpoints under his control, Castello, sits on the entrance of one of the few roads left into northern Aleppo province. Prior to the military road through Khanaser being retaken by the Syrian army last month, anyone wanting to travel to or from Aleppo had to pass through it. His men would routinely harass and rob passengers, especially those who lived in the affluent parts of the city, discernible from the place of residence marked on their ID cards. Travelers would tell tales of children being taken aside and asked what their father did for a living, or what kind of car they owned. If they suspected you were rich, they either robbed you straight away or kidnapped a family member on the spot until you could come up with the ransom. One traveler told Al-Monitor about Hayani himself manning the checkpoint and taunting a passenger bus, “Haven’t you people run out of money yet? I’m getting tired of carrying it all away.”

After storming that checkpoint, ISIS released pictures of the confiscated loot, which included jewelry, money, drugs, weapons and household appliances. The group also released a video showing traffic freely flowing again. Needless to say, as hated as the extremist ISIS may be, many people were overjoyed at this little bit of ironically good news in a war that seems to offer very little in the way of positives. In a country gripped with such a messy and bloody war, it seems there are no “good sides” fighting, only shades of bad to worse.