The ascendance of the Islamic Front, while contributing to the recent military defeats of the Islamic State of Iraq and Al-Sham (ISIS), may also be a setback for Geneva II and a political solution to the conflict. 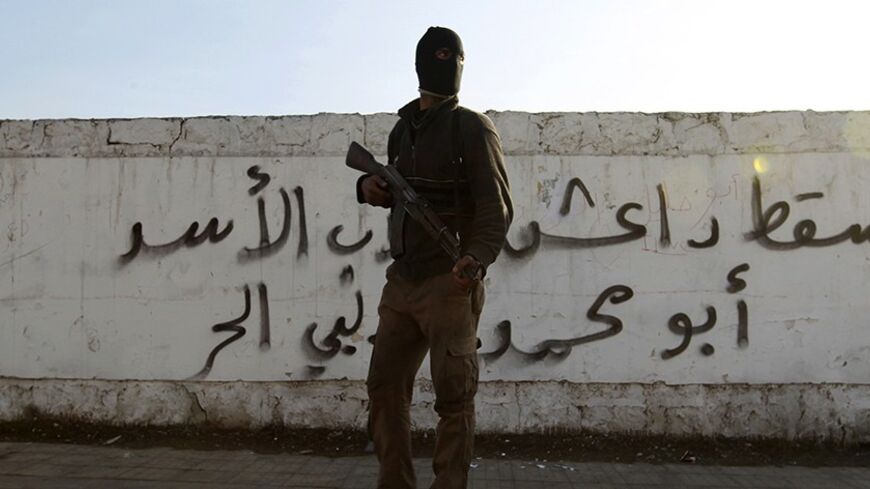 A Free Syrian Army fighter carries his weapon as he stands in front of graffiti that reads "Daesh (Islamic State of Iraq and al-Sham) down" in the Masaken Hanano neighborhood, Aleppo, Jan. 7, 2014. - REUTERS/Jalal Alhalabi
Edward Dark
@@edwardedark
January 13, 2014

ALEPPO, Syria — Another extraordinary week in Syria, which has seen the fortunes of the once powerful Islamic State of Iraq and al-Sham (ISIS) take a sharp turn for the worse, sparking a bloody and bitter interfactional war among Islamist groups for supremacy over rebel territories in the north. So what prompted the allies of yesterday to commit "jihadist fratricide" today? What of the timing of these unprecedented, coordinated attacks across many fronts on ISIS positions, effectively catching them by surprise in a sucker punch that unseated them from many former strongholds?

Make no mistake, this is not a “resurgence” of the Syrian revolution, nor is it another popular uprising against a different tyrannical oppressor, as the Syrian people are now too split, demoralized and war-weary to attempt any of that.

It is simply a cutthroat struggle for power, between jihadist groups of similar ideology, distinct only in name and the identity of their backers, albeit with slightly differing methods of imposing their doctrines on the ground.

ISIS went for complete domination by force, eradicating any resistance to its authority, whether it came from civil activists, other militias or nosey journalists. Their main weapon was terror. Torture, grisly executions and ominous statements sowed fear into the hearts of the populace, which cowed and fell silent about the mounting abuses. Videos of the tortured, bound and executed bodies of opposition media activists and captured rebel fighters taken after ISIS was ousted from their headquarters in a hospital in Qadi Askar, Aleppo, illustrate vividly their mentality and ways of doing business.

The Islamic Front, the alliance of jihadist groups now fighting ISIS, were more subtle and less murderous in dealing with citizens, even though they imposed harsh Sharia rules according to their strict interpretation, for example the public flogging of two men who missed Friday prayers in Sukkari, Aleppo by Ahrar al-Sham. It is also important to note that many factions that make up the Islamic Front have been implicated in serious war crimes such as the mass sectarian killings in rural Latakia and more recently in Adra, as well as the summary executions of captured soldiers.

Residents of areas and towns where the worst of the fighting is taking place are living in severe danger and under dire circumstances. Indeed, many rebel-held areas have not seen this level of violence and killing, even in the heaviest and worst days of regime assaults and bombardment. Heavy-caliber weapons, cannons, rockets and even tanks have been used to shell the positions and headquarters of both sides.

Snipers pick off anything that moves, cars and trucks are targeted and many people are trapped and effectively under siege in their own homes, as the bloody mayhem continues unabated outside. ISIS suicide bombers drive their cars into opposing checkpoints and headquarters, blowing them up and everything else nearby.

The suffering is especially acute in Raqqa and the surrounding areas, including the strategic border crossing of Tel Abyad. The frightened citizens of the city are trapped without food, medicine, water and electricity amid constant shelling and gunfire. Raqqa is by no means unique, many towns and villages across rural Idlib and Aleppo are living the same nightmare.

But ISIS seems to be doomed if the current balance on the ground continues and does not switch once more in this very unpredictable Syrian quagmire. Far outgunned and outnumbered, it most certainly will not go out easily without causing maximum damage and mayhem, both to opposing groups and innocent civilians, although many of them and affiliated militias have already split and joined other Islamist groups. It might still be able to hold on to pockets of territory, or go underground and stay dormant waiting for the right opportunity to resurge, as it did in Iraq.

Some opposition supporters are joyful at this new cleansing of ISIS from rebel ranks, but others worry that if they were to go, they would be back to the days of chaos and rule by thugs and profiteer warlords. At least ISIS kept criminals at bay and imposed some semblance of law and order, albeit in a very brutal fashion. As for regime supporters and many ordinary Syrians on the street, they are content to watch the rebel groups destroy each other in the hope that they will be sufficiently weakened in the end to be easy pickings for the Syrian army.

For its part, the regime gleefully watches on as its self-fulfilling prophecies are coming to realization, one by one. Opportunistically, its troops have moved in to capture some positions abandoned by ISIS fighters such as the villages around Kweires military airport, east of Aleppo.

It is no secret that the Islamic Front now trying to wipe out ISIS is heavily backed and funded by Saudi Arabia, and in this light we can understand the real reasons and timing behind this sudden, all-out war. After the Islamic Front last month effectively destroyed the moderate Supreme Military Council of the Free Syrian Army led by Gen. Salim Idris, it effectively rendered the Geneva talks meaningless and their outcome void.

The next stage is to get rid of the al-Qaeda bogeyman and promote the less extreme versions. Ironically, Jabhat al-Nusra, another al-Qaeda affiliate endorsed by Ayman al-Zawahri and designated by the United States as a terrorist organization, has joined in the fight against ISIS. Will they be the next to go? Or will they be assimilated, repackaged and sold to the world as a more palatable jihadist group, along with the Islamic Front?  Whatever the outcome of this latest rebel showdown, the Islamic Front is certainly no answer to the Syrian conflict. What is needed, as has been repeated, is a political process that ostracizes the extremists, not incorporates them into the political fabric.