The civil war has enabled a few military-minded individuals to make significant profits off the misery of millions of Syrians. 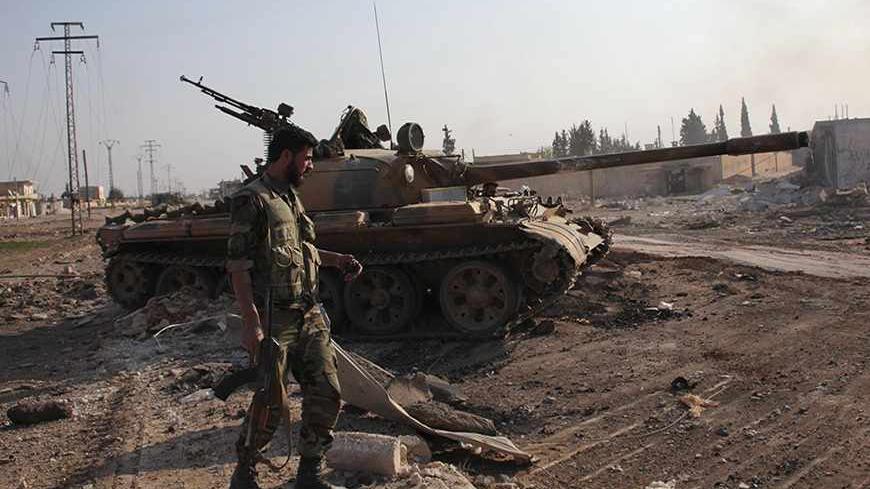 A soldier loyal to Syria's President Bashar al-Assad holds his weapon as he stands near a military vehicle in Tel Hasel, Aleppo province, after capturing it from rebels, Nov. 15, 2013. - REUTERS/George Ourfalian
Edward Dark
@@edwardedark
November 19, 2013

ALEPPO, Syria — When I first met Nidal a few years ago, he was an amiable and unassuming guy. He worked afternoons at a private company to make ends meet, just like most chronically underpaid civil servants in Syria. There was nothing exceptional or extraordinary about him; he was just another casual acquaintance. Fast forward to today, what a remarkable difference a few years and a civil war can make. Sitting across from me in a trendy café in west Aleppo in May, he told me of his rise to prominent commander in the Baath Brigades and boasted of his exploits, battles and victories.

The Baath Brigades are basically a militia of loyal Baath Party members, an all-volunteer force. They were set up in Aleppo a short time after the rebels stormed the city and took most of the eastern half. They were initially deployed to guard government buildings and vital installations, but their role would become more prominent as their numbers and strength grew.

They gained notoriety as their string of successes in several key contested areas overshadowed that of regular army units. Their effectiveness in battle owes as much to their training, overseen by officers from the elite Republican Guard, as to their ideology. Technically, they’re still a civilian militia, largely made up of the Baath Party faithful who believe strongly in the doctrine of their party and feel they are fighting for their country against foreign and domestic terrorists — hypernationalists, if you will.

It is this conviction and motivation that gives them an edge over the regular army units, especially those made up mostly of conscripts. This is why they‘ve been used to spearhead many offensives into rebel-controlled areas, including the old city, Layramoun, Sheikh Saeed, Sheikh Maksud and Salah el Deen.

Aside from that, they keep good community relations and are well disciplined at the checkpoints they run. You won’t find many people complaining about abuse from their men, which is more than can be said of the other pro-regime militias in Aleppo, namely the Ligan Shabiya (Popular Committees) militia. This is largely due to a strict command structure as well as most members being from the city itself, not elsewhere.

Their headquarters is the fortress-like main Baath building near the central park and Saad Allah Jabri Square. It is an ominous, monolithic, towering building designed specifically to withstand a prolonged assault. Its meters-high steep walls, machine-gun nests and reinforced concrete structure make it a formidable bastion. The underground bunkers are used to store ammunition and food that would last for months during a siege. The building is the nerve center of the civilian and military command of the Baath Party in Aleppo, and houses liaison officers from the Republican Guard and other units.

As far as I can gather, there are no detention facilities there since the Baath militia does not keep any prisoners, instead handing them over straight away to the various intelligence agencies or the military police.

As he vigorously smoked his water pipe, what struck me most about the ways Nidal had changed wasn’t his overconfident attitude, his smart military fatigues or even the massive four-by-four truck with the heavy machine gun mounted in the back that he drove in. It was his bling.

He sported a heavy gold chain and two expensive smartphones and I wondered, how much were these people getting paid? As he made a string of phone calls to several mistresses and a couple of his lieutenants on the front lines, and then nonchalantly discussed opening up an expensive café with our mutual friend also seated at the table, he stated that money was no problem. He had millions and wanted a prime spot. I had no doubts that his cash was ill-gotten.

Of course, I didn’t have the courage to ask, nor did I really want to know the answer. As the conversation progressed, he started telling us tales of his heroism and military prowess. They were no doubt slightly exaggerated, but nevertheless also largely true, as his men’s victories were documented by official Syrian media as well as a Facebook page ran by the Baath militia. (The original page was taken down; this one is a replacement. The original page had pictures and videos of the Baath Brigades other military units in various campaigns across Aleppo).

As he spoke, his contempt for the rank-and-file army units was evident.

“They’re poorly trained, poorly equipped and unmotivated,” he said. “They’re bad fighters, might as well be cannon fodder. Their units suffer so many casualties and wounded that entire battalions are decimated within a month and rendered useless.”

An example he recounted was how his men, after days of fierce street fighting, managed to take over the Grand Umayyad Mosque and much of the surrounding areas late last year. After they had secured the location, they handed it over to the regular forces. Syrian state TV came in and filmed, and then the prize was promptly lost back to the rebels just a few days later.

Another tale was of how, after they had managed to fight off the rebels and retake much of the strategic Sheikh Saeed area, a sniper picked off a couple of his men. With cold indifference, he recounted to me how he and his unit disguised themselves as rebels, snuck in from behind his position and captured him alive.

There was no need for him to finish his story, for the video he showed me on his mobile phone told it all with graphic detail: They doused him with gasoline and burned him alive. I was used to seeing many terrible videos out of the Syrian conflict, but this one was particularly disturbing as the beaming perpetrator was sitting right in front of me.

“Before you ask, I feel no remorse. That bastard killed my men; he deserved it,” he exclaimed. A string of stories followed about his heroism in retaking large areas of Sheikh Maksud, where they had been surrounded for days, killing many rebels, and another picture gallery tour of his mobile phone showing him and his men inside Salah el Deen, astride tanks.

Finally, he took a phone call from one of his men’s mother, who hadn’t seen her son for days because he was stationed in a hot spot at the Layramoun area. He promised her that her son would be home that night, and that he was safe and well. After that, he bid us farewell and invited us to come along with him.

“Just going to get some supplies for the boys in Layramoun — some booze, cigarettes and food — and spend the evening there. I have some spare body armor if you want,” he said. We both graciously declined the offer, even though he did manage to make it sound like a picnic.

After he departed, I was left to my own musings, and could only conclude that civil wars were definitely the worst type of war. They spawn monsters and make beasts out of ordinary men. How will these people ever go back to civilian life when this is all over? How can they help rebuild a shattered nation? I’m sure that Nidal is not unique, and there are many Nidals fighting on both sides in the Syrian conflict.

Editor's note: Names have been changed in this report.