Residents of Aleppo are losing patience with the hardships the war has brought and want an end to the conflict that has ruined their city and their lives. 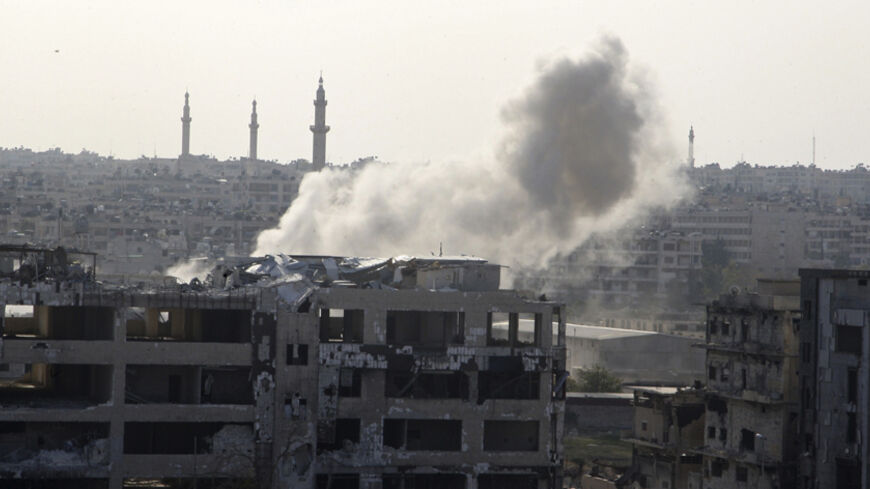 Smoke rises from the neighborhood of al-Khalidiya, where forces loyal to Syria's President Bashar al-Assad are located, during what activists said was shelling by Free Syrian Army fighters from the Bani Zeid neighborhood in Aleppo, Nov. 10, 2014. - REUTERS/Abdalrhman Ismail
Edward Dark
@@edwardedark
November 20, 2014

ALEPPO, Syria — The long stalemated northern front, which has seen little change since a rebel offensive took over half the city of Aleppo and almost the entirety of its countryside over two years ago, seems now to be entering a new phase, one which may either solidify the status quo via a UN-proposed "conflict freeze" or see the regime push on with its increasingly successful campaign to take Aleppo back from the rebels.

Although opinion in the city is divided over the ambiguous "freeze" proposal, there is overwhelming support for a respite — brief or permanent — from the real hardships and dangers of war. To put it all into context, Aleppo is a city under constant bombardment from both warring camps. It suffers from chronic shortages of basic needs, collapsed infrastructure and a breakdown of general law and order. Those problems are especially pronounced in the rebel-held east. To gauge the pulse on the street, Al-Monitor spoke to three residents representing a cross section of the diverse economic and social fabric that makes up the identity of this complex metropolis.

Ahmed is a skilled laborer who once lived in the rebel-held eastern neighborhood of Fardos, a lower working class area before the conflict. He told Al-Monitor that despite all the dangers there, he wants to go back with his family. He said, “We are sick and tired of being treated like beggars and refugees in our own city. I would gladly return and live in my own house and take my family. We don’t care about the barrel bombs. If we die, we die — that will be our fate, and only God decides when it is our time to go.”

When asked why he doesn't return, he said, “I can’t go back because I can’t find work, so I can’t feed my family.” Ahmed faces the same dilemma as many of his neighbors and relatives, who are in similar circumstances. He said, “Many young men joined the rebels not because they believed in their cause, but because they needed money. They left the groups who could not pay salaries and went on to others that could. It was all about the money, and many previously good men stole because their commanders told them it was OK — it was war spoils and by religious decree their right as fighters. I didn’t believe in that, so I refused to join the rebels."

When asked if he supported the freeze proposal, Ahmed said, “Yes, we’ve had enough. We can’t take it anymore. We want our old lives back.”

Ahmed’s plight is all too depressingly common in Aleppo, where there are simply no jobs to be had, and even those who are employed cannot make ends meet and have to make do without certain essentials, such as heating. Formerly wealthy Aleppans are living off their savings, which after three years of war are running worryingly short. In desperation, many of Aleppo’s residents have joined militias on either side of the conflict, simply to earn a living and not out of any real conviction.

On the other end of the economic spectrum is Haj Waleed, a former industrialist and owner of a textile factory in the Sheikh Najjar industrial zone. He explained his predicament and that of many other industrialists who were once the backbone of Aleppo’s economy. He said, “When Sheikh Najjar first fell to rebels, the Liwa al-Tawhid [Brigades] were powerful and tried to keep some sort of order, which lead to few cases of thefts. Many industrialists kept on working through that, paying money for ‘protection’ to various groups. Then more extreme Islamic groups came, like the Islamic State [IS] and Jabhat al-Nusra. They didn’t bother us at all or take money or take over our factories, but by then many had already shut down due to a lack of electricity. They were later pushed out and the rebels came back in. Finally, the regime’s forces routed them and took over the industrial zone.”

He went on to explain how Aleppo’s industry finally collapsed.

“It was around that time that factories began to be seriously plundered. When the rebels knew one was about to be taken over, they frenziedly worked day and night to take what they could. Many factories were taken. When the regime’s forces came, they were led by Col. Suheil Hassan, who did not allow them to steal. But then he left, and there was disorder. Pro-regime militias took over and began to steal what was left. This, plus the damage from the fighting and the lack of electricity, means that factories can no longer run, or if they can, they suffer great losses as fuel for power generators is too expensive now.”

Haj Waleed is pessimistic about the chances of a quick recovery for Aleppo, even if a conflict freeze takes hold, which he also supports. He said, “I support anything that will stop this madness, but Aleppo will not recover its industry and economy for many, many years.” The factories, once so vital to Aleppo’s economy, will stay shut, further hindering the healing of the city as many languish in poverty.

Yousef, a member of Aleppo’s Christian minority and a former regime militia fighter, came to bid his friends farewell as he was leaving for Turkey with the intention to reach Europe via the people-smuggling routes. He said, “There is no future left here for us, even if the regime wins the war. There is no work, no opportunity for young men like me. When I fought in the ranks of the regime, it was out of a desire to protect my Christian community from the danger posed by jihadist groups, not because I believed in the Baath ideology or even supported the government. Now I have done all I can. My duties have been carried out and I am going to find a new future in Europe." When asked about the freeze proposal, he said, “It is only a temporary measure. We will never be really secure until the rebels are defeated for good.”

Yousef’s decision to leave echoes the desires of many of Aleppo’s young men, who have lost hope and desperately want to seek better lives for themselves in the new "promised land" — Europe. They beg, borrow or steal to pay the extortionate amounts demanded by human smugglers, and many of them end up at the bottom of the sea. Tragically, some take their wives and children there with them.

A respite can’t come soon enough for Aleppo, and a conflict freeze is desperately needed and welcomed by the people here. It is now up to the powers that be to fulfill that responsibility.