Aleppo's civil opposition has been swept aside as hard-line armed groups assert their power in the city. 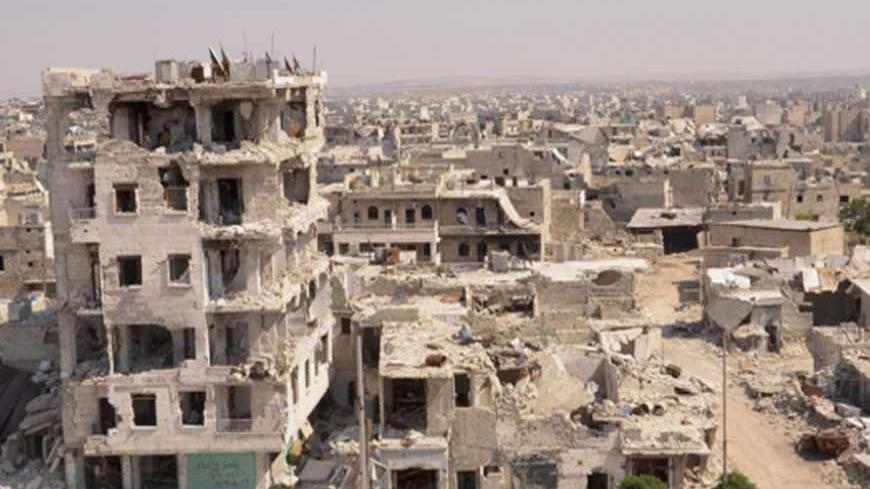 ALEPPO, Syria — The schism between civil activists and armed revolutionaries is at its widest since the Syrian uprising began, and it’s only getting worse. There are a multitude of reasons for this, but the most important one is expectations — what each side hoped the uprising would achieve. For the civil activists, it was the overthrow of tyranny and the establishment of a secular, civil and democratic society. For those who took up arms, it was basically a many pronged power struggle; class, sectarian or opportunistic, depending on which spectrum of the armed groups they belonged to.

The major defining characteristic of civil activists across the country was their insistence on non-sectarianism and an adherence to the higher ideals of justice and freedom. The armed groups morphed like a chameleon changing colors, at the beginning justifying taking up arms to “protect the protesters” from security forces, and later on justifying their violence as a reaction to the regime’s. Any hidden agendas some of those groups may have had initially were carefully kept secret, both from society as a whole as well as media scrutiny — of course some pan-Arab media was actively complicit in this cover up — although there were some troubling tell-tale signs. As the uprising progressed, and some of those groups were armed and trained by regional and foreign powers, they adopted other agendas — usually dictated by whoever was supplying the weapons and the paychecks. They simply no longer cared and transcended the popular uprising and protests that spawned them and gave them their legitimacy, to completely dominate the revolution, and so in essence destroyed it by morphing it into a civil war with visibly sectarian dimensions — as became evident with the deliberate targeting of Shiites and Alawis, regardless of their links to the regime.

And that’s not even mentioning the more sinister of the armed groups, the Islamists, Jihadists and al-Qaeda affiliates who wanted nothing less than to turn Syria into another Taliban-style theocracy. They already have their religious courts and councils set up, dispensing justice via “Sharia law.” The one in Aleppo, for example, is called the “Hai’aa Sharia,” which looks into anything from murder and rape to “morality” crimes such as drinking alcohol or wearing shorts. The worrying trend is that many locals see this as preferable to the rampant crime and lawlessness, and that helps these groups gain traction and support on the ground at the expense of the more moderate ones. That, plus the aid they supply to residents as well as their reputation for not looting private — public- or state-owned is fine, however — property.

In other words, the civil activists wanted to change society, while the armed groups only wanted to change the face of the tyrants ruling it. Another striking difference between the armed and civil sides was the strange way the armed groups used “the ends justify the means” motto to do basically whatever they liked, including looting people’s homes and businesses, execution without trial, kidnapping for ransom, car bombings and indiscriminate shelling of civilian areas, and even — and this is perhaps what rubs salt in the wound — the torture and killing of several prominent opposition and media activists in Aleppo such as Mohammed al-Khalid and Abdullah Yassin. Both were silenced after they started openly criticizing and exposing the thefts of various rebel factions. The perpetrators of those crimes are well-known, and even now, months later still on the loose and fighting the “good fight” against the regime.

To illustrate more personally what I’m talking about, take the story of my friend, and longtime civil activist, Mustafa Karman, who was tragically killed when a protest he was at in Bustan el-Qasr in Aleppo was shelled. He was there, almost every day delivering aid, organizing a protest or working on his long-term project, a school for the displaced and poor children of the area. He died just before it opened, and it was posthumously named after him. Many don’t know this, but Mustafa was a Shiite, and he often bitterly joked that both sides were after him. One because he was an opposition activist, the other simply because of his sect. This was his dilemma, and it became so dangerous that he was planning to leave the country. Sadly, he was killed shortly before he could do so.

He absolutely detested the armed groups that not only didn’t help with any of the work the opposition civil society was trying to do in the liberated areas but sometimes even actively blocked or disrupted it, fearing that it would cause them to lose influence in those parts. To them, influence and power came from the business end of their guns, not when you helped or made a difference to people’s lives. Many activists tried reasoning or pleading to the armed groups, trying to convince them to leave certain areas so that they wouldn’t put civilians in danger, or explaining to them why it was necessary to set up some sort of civil administration in their areas, but they always came back frustrated. “There’s no hope, you just can’t reason with those people,” one of them told me.

Another tireless and dedicated activist I knew was Abu Muhamad, a middle-aged activist I did aid work with before Aleppo was assaulted by the rebels. I would pick him up in the Al-Sikari neighborhood with my car, and he would take us around to distribute the food aid rations to the displaced families in that area. He knew them all personally, every single family. He knew what each needed, too. “This woman lives all alone and raises orphans, we need to get her provisions of nappies and baby formula. This family sleeps on the ground, they need mattresses.”

When the rebels assaulted Aleppo and entered Al-Sikari, they went straight to the local infirmary and clinic and looted medicines and equipment. Abu Muhamad tried to stop them. “Those are for the people here, they need them,” he shouted at them. “Not anymore,” they told him, “they’re ours now.” I don’t know what became of Abu Muhamad — I lost contact with him shortly after — but I knew he lost his home to regime shelling after the rebels took over the area, just another victim of their "liberation."

But perhaps most alarming of all was a distressing message I got a short while ago from an activist I hadn’t heard from in a while. “There are hundreds of starving families in Aquol,” she said. “They need immediate food aid if you can help or know someone who can.” I don’t travel to rebel-controlled parts of Aleppo anymore as the main crossing points have become dangerous sniper zones. I replied, “Wait a minute, isn’t that part held by the rebels? I heard they were getting massive amounts of aid from various groups set up in Turkey.”

“Yes, a lot of aid is getting in to rebel areas, but they just sell it off and buy weapons with it,” she replied. That made sense, I’d seen a lot of cheap Turkish goods on the market with “Aid, not for sale” stamped on them. Well, seems now the rebels can add mass starvation to their list of "achievements" in Aleppo.

And so the rift between civil and armed groups deepened, and many activists felt like they were fighting a futile uphill battle, trying to stop a torrential river with a straw dam. Many of them became disillusioned and frustrated, some just stuck to doing whatever aid work they could, others simply gave up and left the country entirely. To put it mildly, most activists feel betrayed and used by the armed groups.