Schools across Syria have been shut down, damaged or used as shelters, denying millions of children the chance to attend. 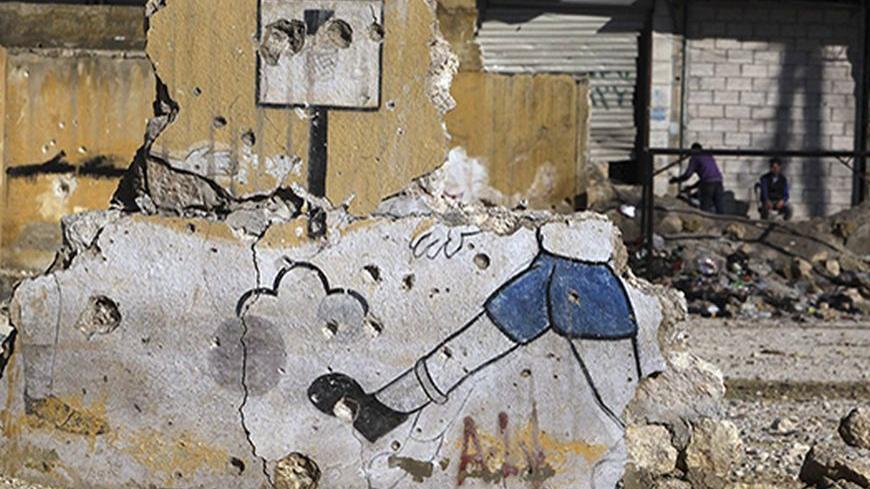 ALEPPO, Syria  — Maryam, no more than 9 years old, sells biscuits and sweets from a cardboard stall on the pavement. I pass her almost every day on my way downtown, and occasionally stop to buy some of her cheap, inedible merchandise. She still has that impish and innocent smile that all children have, but her eyes betray a deeper sadness. They have seen what no child should ever have to see, and her little soul has endured what nothing so fragile should ever have to bear.

I asked her one day, “Are you in school?” She smiled and responded, “I am in school, but I don't go to school.” Maryam was living in a nearby school along with her family and others displaced by the fighting. That was a bitter irony for young Maryam: She was in school all the time, but not getting any education. Tragically, her case is not unique, and thousands of other children like her, both internally displaced in Syria or living in refugee camps in neighboring countries, are missing out on vital education pivotal to their mental and social development.

Education in Syria, before the war, was like everything else here: decrepit and haphazard, a contradictory mix of good and bad. On the plus side, education has always been free, right up to university and postgraduate degrees. The state would even grant scholarships for Ph.D. programs abroad to students who excelled, provided they agreed to return and put themselves to good use in state or educational institutions for a few years.

The downside, however, was that the standards of the public education system grew appallingly dismal. They were racked with many deep rooted problems such as outdated curricula, ill-trained staff, physical and verbal abuse of students, overcrowding and corruption. More importantly, up until just a few years ago, there were only four universities, all state-run, to cover a Syrian population of more than 20 million.

This led to ridiculously high acceptance scores, overcrowding and many students missing out. The alternative was for well-to-do families to send their children to study abroad in Jordan, Lebanon or Russia and the former Soviet states. Only the very rich sent students to Europe or the United States.

This changed, however, when private universities and schools were finally allowed to open and officially operate in Syria in the mid-2000s. Although quite expensive, they provided a higher standard of education, lower acceptance scores and an alternative to travel.

But as the current conflict intensified, the problems became more acute, placing formidable challenges in the face of an already weak and overstretched system. Many students were simply unable to attend school for a variety of reasons. Roads and highways across Syria became impassable and private universities, required by law to have their main campus in the countryside, shut down.

For example, Ebla University has a campus near the rebel stronghold of Saraqeb on the Aleppo-Damascus highway. It shut down this spring, as the highway became a conflict zone. There are still around 200 students staying in dorms there, some with their families, even though all classes have stopped. Most of them are unable to attend the university’s second campus inside Aleppo, as many are wanted by the regime and dare not cross any checkpoints.

On the regime side, many schools and dorms were used as temporary housing for the thousands of families displaced by fighting after the rebel assault on Aleppo in the summer of 2012, making them unavailable to students. A lot of desks were destroyed, as refugees used them for firewood during the harsh winter.

What little schools remained were overcrowded and barely functioned, with a severe shortage of staff and books. Classes were cut short and students were often sent home. Outbreaks of lice became common after the problem was nearly unheard of for decades. Private schools started to spring up everywhere, sometimes in inadequate facilities like converted homes and without any oversight or accreditation.

These schools were also too expensive for most families, which meant a lot of students got subpar or no education. Ahmed, a taxi driver, told me how he and his family were unceremoniously thrown out of a nearby school, with only a few hours’ notice.

“They wanted us out so they could begin classes, but we have nowhere to go,” he said. Ahmed and his family slept in his minivan after they were evicted. They later returned to rebel-held east Aleppo. Others who had nowhere to go were sent to unfinished housing projects with no tiles, windows or plumbing.

On the rebel side, the situation was far more chaotic. Many schools and university campuses were used as rebel bases and were subsequently bombed, rendering them unusable. The Khaleej University campus, for example, just off the Aleppo-Damascus highway, suffered such a fate.

What few schools remained intact were manned by activists and volunteer teachers who tried their best to run makeshift operations and gather enough donations to provide books and keep the schools afloat.

Despite their best efforts, most of those schools would prove to be failures because of a confusion of curricula, with some choosing Egyptian or Libyan programs over the official Syrian curriculum, and a plethora of grading systems and report cards. One such school is the Mustafa Karman School in Bustan al-Qasr, posthumously named after the activist who helped set it up. Al-Qasr was killed by regime shelling last year at a protest, the day he was delivering a consignment of donated books to the school.

A report card issued by the school after the first semester featured on its cover a verse from the Quran, a quote from a well-known cleric, a quote from the Prophet Muhammad and one from Nelson Mandela, reflecting the various and sometimes contradictory secular and religious forces at play within the Syrian opposition.

Recently, some schools in rebel areas have readopted the Syrian curriculum, but refuse to teach what they deem objectionable material like religious or political studies. In a disturbing new development, all the schools in the town of Al Bab in Aleppo province now under the control of Al-Qaeda’s Islamic State of Iraq and al-Sham militants were mandated to change the traditional flag salute in the morning assembly to a religious one, with cries of “Allahu Akbar” and “Prophet Muhammad is our leader.”

When you combine all this adversity with the low education standards, you will unfortunately end up with an undereducated society where ignorance and poverty are rife. What scars these children today will come back to haunt Syria in the future. As the country faces the largest brain drain and migration of professionals in its history, the issue then turns to educating the next generation, which will be responsible for rebuilding a nation our generation has effectively destroyed.