Aggression by Islamist rebels against civilian opposition activists has only increased disillusionment with what started as a noble revolution. 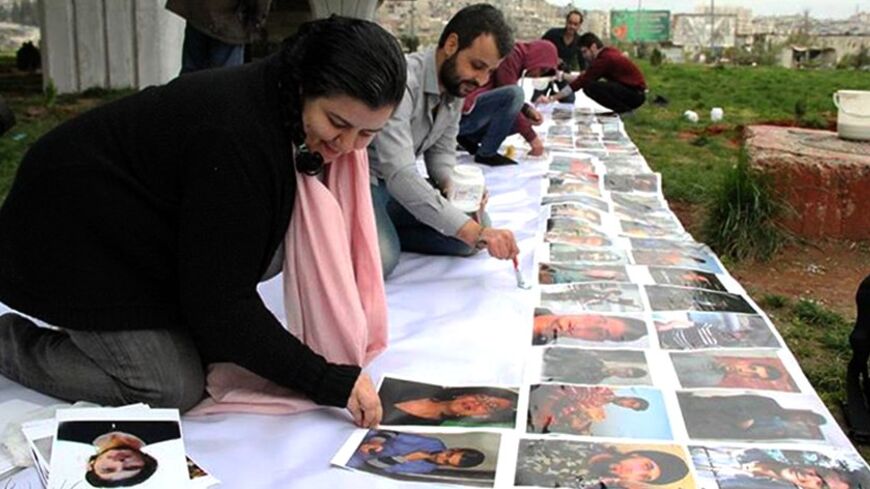 Marcell Shehwaro, an opposition civil activist, and her group make a mural of martyrs from the Syrian revolution for the third anniversary of the rebellion. - Facebook/Marcell.shehwaro
Edward Dark
@@edwardedark
March 25, 2014

It is easy to forget amid all the mayhem, carnage and brutality in the Syrian conflict today that it was once an inspirational and peaceful mass movement for political change and civil rights. That time seems like an eternity ago, and everything that has transpired since then — all the destruction, murders, beheadings, extremism, barrel bombs, dead children and floods of refugees — could never have been imagined by the people who were its inspiration and its spark, the brave civil activists who started it all.

These activists were predominantly liberal and secular, but hailed from all social and religious backgrounds. They were united by a vision and a noble aim. They espoused the kinds of freedoms and political rights for which most Syrians yearned. The way they were marginalized and ruthlessly hunted — first by the regime and later by the extremist Islamist rebels as secular apostates and the moderates for exposing their crimes — is just one more tragedy in a seemingly endless list that has afflicted this miserable nation.

The civil activists are now a dying breed, hunted into extinction by the malice of those who view them as a threat. In Syria, that means just about anyone with a gun. Most of them are now dead, in jail or have fled the country. Perhaps nothing better highlights their plight than the story of Marcell Shehwaro, the daughter of a respected priest and a well-known opposition civil activist in Aleppo.

Shehwaro has been involved with the anti-regime civil movement since the start of the Syrian crisis, and along with a small group of friends engaged in a number of activities ranging from aid work to organizing protests, online activism to distributing anti-government fliers. After the rebels stormed and took east Aleppo in July 2012, Shehwaro and most of her group left the regime-held west for the newly “liberated” areas, where they continued their work as before, only now with a larger degree of freedom. This situation did not, however, last long.

As rebel factions became increasingly radicalized, and an extremist hard-line ideology spread among their ranks, her group began to run into all sorts of trouble. The main problem, of course, was that they believed in a secular democratic state, which is anathema to the jihadists. In fact, many activists across Syria have been negatively labeled as secular, an accusation that has landed them in rebel jails or worse.

Shehrawo’s group was acutely aware of this danger and did not openly campaign or actively spread their ideas, preferring to stick to aid work, which meant that the armed rebels, for the most part, left them alone. That is, until last week, when Shehrawo and her group were busy at a bustling roundabout making murals to the martyrs of the revolution in time for the third anniversary of the rebellion.

A member of the radical Jaish al-Mujahidin approached and demanded that Shehrawo wear a hijab to cover her hair, even after being told that she was a Christian. Shehrawo refused, and a scuffle broke out, after which she was arrested by armed men and taken to a rebel Sharia court. She was freed only after signing an agreement to wear the veil from then on.

Distraught, Shehrawo immediately wrote a poignant post for her Facebook page, which she later removed out of fear and following pressure from other activists. Regardless, she had already revealed a great deal about how she felt. Most important was her message to other Christians: “It is impossible for Christians to live with this armed opposition. … When I asked what they will do with them, some groups said they will force them to wear the veil. Others said they will kick them out. … I was wrong, your fears were justified. Leave this country, it’s not ours anymore.”

A Jaish al-Mujahidin commander later issued an apology for his men’s actions, but the ruling still stands, and Shehrawo still has to wear the veil. This incident caused an uproar in opposition ranks and gained widespread media coverage, but it did not change anything on the ground or the behavior of the rebel groups, who believe that might makes right and have thrown away any pretense of fighting for the freedom of the Syrian people. Instead, they have perverted the course of a noble uprising into a hate-fueled sectarian war for power and establishment of an extremist theocracy.

Any who openly opposes or criticizes these extremist rebels will share the fate of the renowned activist Razan Zaitouneh and her colleagues at the Center for the Documentation of Human Rights Violations in Syria, who disappeared from Duma, on the outskirts of Damascus, after releasing a damning report outlining the crimes and abuses of Islamist armed groups.

Silencing the civil activists of Syria with threats, violence and intimidation was a practice first perfected by the regime and later adopted with just as much vigor by the rebels. The last nail in the coffin of the Syrian revolution was when its guns silenced its voices of reason. It then ceased to be a popular uprising for freedom against tyranny and mutated into a grotesque mockery of itself, replacing one form of tyranny with another.

On a different but related note, I was recently reunited with the mentor of our own now-defunct activist group, a young woman who also happens to be a Christian. Misho had been just like Marcell at the beginning: a devoted, selfless and tireless activist. But unlike Marcell, Misho saw the writing on the wall when the rebels invaded Aleppo. She has since stopped supporting the opposition movement altogether and ceased all her activities except for aid work to help displaced and needy families.

I was somewhat surprised when I learned that she was now helping rebel fighters trying to escape to Turkey to find work and a fresh start, away from the war and the guns. When I asked her about it, she said, “They’re fighting because they have honor, because they are noble men. But they see the crimes of the rebels and the extremists, and they want out. Many are afraid to leave, afraid of reprisals by the rebels or being caught by the regime. They don’t trust the regime enough to give themselves up. They think they’ll be killed.”

That sums up the dilemma of all honorable Syrians, surrounded by enemies on all fronts in a war of dishonor.