Obama ramps up on Syria

The US president is giving new priority to the threat from terrorists in Syria, while calling for increased military support for opposition forces. 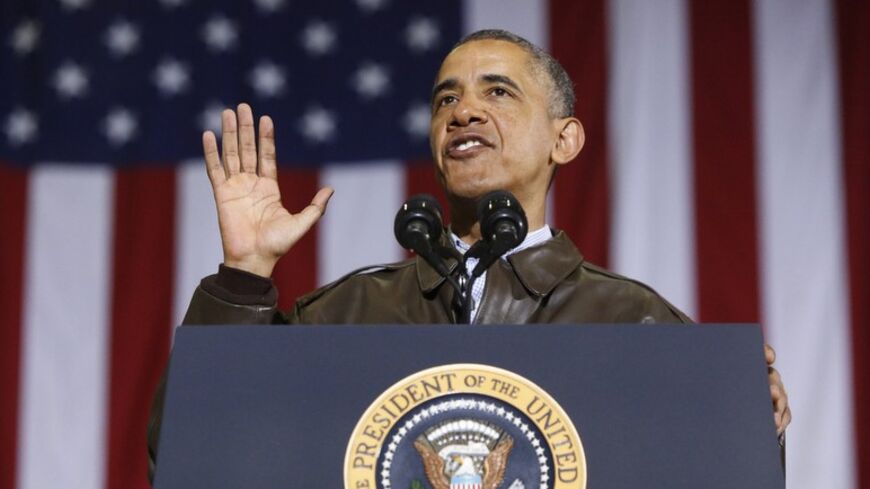 US President Barack Obama speaks to US troops deployed in Afghanistan during an unannounced visit to Bagram Air Base in Kabul, May 25, 2014. - REUTERS/Jonathan Ernst

US President Barack Obama this week called for a new global counterterrorism strategy including engaging US allies bordering Syria to contend with refugees and terrorists working across Syria’s borders.

“As the Syrian civil war spills across borders, the capacity of battle-hardened extremist groups to come after us only increases,” he said.

Since January, this column has identified a regionally based counterterrorism effort among Syria’s neighbors and enhanced humanitarian assistance as elements of a new “pulse” of a strategy to address the crisis in Syria.

Another advantage of Obama’s approach is that it can serve as a means to test Iran on Syria, as this column explained last week. Iranian officials have consistently referenced counterterrorism and humanitarian assistance as priorities in Syria, a shared interest with the United States, according to Obama’s speech.

The head-scratcher in Obama’s approach, in which he otherwise warned against over-reliance on military approaches to conflicts like Syria's that do not lend themselves to purely military solutions, was his call to “ramp up” military assistance to Syrian opposition forces, which will have the likely consequence of prolonging the war, as Geoffrey Aronson writes.

There may be a case for backing moderate armed rebel factions as one means of leverage to facilitate a political solution, which this column has supported. But it is hard to place the "ramp up" in the broader context of a regional counterterrorism campaign, let alone regime change in Syria, at least not at the envisioned levels of support.

In his speech, Obama said the United States must draw on “the successes and shortcomings of our experience in Iraq and Afghanistan” in this new approach to counterterrorism. Exactly right.

On that score, it is perhaps worth a wider think about what might be the real-life expectations of building an armed Syrian opposition out of whole cloth, to battle both al-Qaeda and related terrorist networks, and Syrian government forces, backed by Iran and Hezbollah, given the current balance of forces in Syria, and considering the mixed records in Iraq and Afghanistan, where the United States has been running training and assistance programs to those national militaries for more than a decade.

Al-Monitor’s Iraq Pulse has reported on how Iraqi national security forces are in a fierce and sometimes losing battle in Anbar province against those same terrorist forces that are battling the government in Syria. Afghan security forces have faced similar challenges against the Taliban.

This is just to say “military assistance and training,” in and of itself, is no surefire means of building an effective military force, especially in the Syrian case, where the moderate opposition is outgunned on all sides by more experienced armies and armed groups.

Advocates for the Syrian opposition are for now pocketing the president’s approach as the best they can get, as they attempt to build more support in Congress and hang on until 2016, when they hope that the next US administration may be more inclined to support their efforts.

The reaction to the "ramp up" in Congress so far is mixed. The Senate Armed Services Committee, chaired by Carl Levin, D-Mich., has included language in the annual National Defense Authorization Act that would allow the Department of Defense to take over and intensify the training and support mission, which is currently run by the Central Intelligence Agency.

The House Appropriations Subcommittee on Defense, however, has included restrictions and conditions on US military assistance in its annual bill that funds the Pentagon, as Julian Pecquet reports. Rep. Rodney Frelinghuysen, R-N.J., chairman of the subcommittee, opposed Obama’s request for authorization to conduct US military strikes in Syria in September 2013.

Meanwhile, the debates in Washington may come across to Syrians and those in the region as disconnected from what is happening on the ground.

Jean Aziz, reporting from Damascus, writes that Syrian officials appear relaxed and confident and preoccupied with registering a high turnout in the elections on June 3.

Sami Nader reports from Beirut on how the Lebanese capital was shaken by the thousands of Syrian expatriates who turned out to vote in the Syrian elections.

Edward Dark writes this week from Aleppo on how the widespread and systematic looting carried out by both government and rebel forces can be characterized as a "weapon of war":

"This out-of-control war profiteering is unfortunately not confined to common thievery, and extends to the plunder of national treasures in historical dig sites, the illegal extraction and refining of crude oil and the exploitation of the shortages and dire circumstances of civilians in hotspots, especially in sieges. It is this last point that is especially abhorrent and repulsive, as it preys off people’s misery and need."

In sum, President Obama has put the United States on the right course in Syria. The threats to the United States and its allies come from the rise of terrorist groups and the toll of the humanitarian and refugee crises. Syria should be considered in context of a global and regional counterterrorism campaign, and a humanitarian crisis of deserving of urgent global attention.

Those who clamor for the United States to "do more," meaning further militarizing a brutal civil war beyond the president’s "ramp up" with a low-grade regime change policy, should have the burden of explaining how such an approach will end the war and its related tragedies, sooner rather than later; what exactly is the endgame, reflecting on the experiences of Iraq and Afghanistan; how it will defeat terrorists who are laying waste to parts of Syria and Iraq and threaten the United States and its allies; and, in the process, keep the United States off the slippery slope to further military engagement, which Americans don’t want.