Aleppo's fuel crisis will only worsen with US sanctions on Iranian oil and the Syrian Democratic Forces' decision to stop smuggled oil from entering the regime-controlled city. 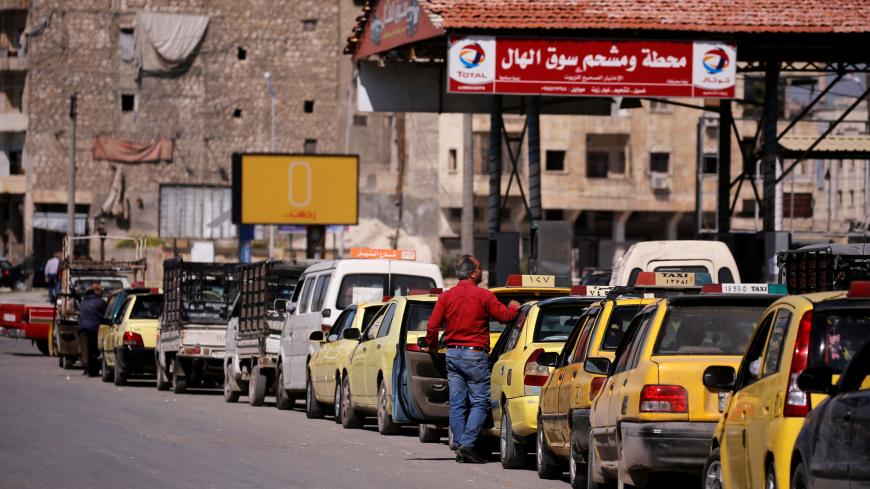 Motorists line up at a gasoline station as they wait to fuel up in Aleppo, Syria, April 11, 2019. - REUTERS/Omar Sanadiki

ALEPPO, Syria — The Syrian regime-held city of Aleppo is in the midst of a fuel crisis. Since early April, fuel shortages have plagued the city, where hundreds of vehicles queue daily at gas stations to get a few liters. Fuel scarcity has crippled the public and private transport sectors, prompting a rise in transport costs as well as fuel prices on the black market.

Damascus, Homs, Hama and Latakia are also suffering from fuel shortages, which regime officials attribute to the halt of Iranian oil supplies as a result of US economic sanctions.

As part of the government’s austerity measures to counter the crisis, the Ministry of Petroleum and Mineral Resources issued a decision April 15 to limit gasoline allocation to 20 liters per five days for private vehicles and every two days for taxi cabs.

Some of Aleppo’s gas stations continue to sell limited quantities of gasoline, as they are open intermittently, for a period not exceeding two hours per day, while others have totally stopped, given the lack of supply. Cars are seldom seen on the streets of Aleppo, as many car owners prefer to park their cars in front of their residences rather than wait in long lines or buy gasoline at double the price.

The crippling of the transport sector has negatively impacted various aspects of life in Aleppo. It is no longer easy for people to travel to work. Many people must now wait at bus stations in front of universities and in the city center. Markets, shops and restaurants are also affected. Streets that were once busy, such as Jamiliyeh, al-Furqan, Shahba, Bab al-Faraj, Baron, al-Aziziyah, Maysalun and Saadallah al-Jabiri Square, are now empty.

Black-market gasoline prices in Aleppo have also skyrocketed. A liter of gasoline on the black market costs 700 Syrian pounds (around $1.50), while it is sold for less than 220 Syrian pounds (50 cents) at gas stations. The limited fuel supplies and the high black-market prices are why cab drivers refrain from using meters. The cost of a ride inside the city of just a few kilometers went from around 250 Syrian pounds prior to the crisis to 1,000 Syrian pounds.

A government employee in Aleppo told Al-Monitor that he needs four liters of gasoline per day to get to work. “The long queues at the gas stations prevented me from obtaining gasoline, since the fuel crisis has started," he said. "This is why I am taking a bicycle. It is cheaper.”

A taxi driver in Aleppo told Al-Monitor that he sometimes waits in line at a gas station all day for 20 liters of gas. “There is no control over the filling stations," he said. "The regime’s police and security forces that are supposed to organize the queue of cars at the filling stations are requiring that the drivers pay them a sum to let them fill their cars” without having to wait.

“We will have to wait for long if we do not pay them,” he added. Such bribes cost up to 2,000 Syrian pounds, or $4, he said. According to the taxi driver, the regime security members at the gas stations steal large amounts of fuel intended for sale, and sell them to merchants on the black market. This could not be independently verified by Al-Monitor.

Speaking to Al-Monitor, Majd Halabi, a tailor from Aleppo, said, “The city at night is more like a ghost town, and there is almost no traffic running in the streets. There is even no traffic congestion during rush hours. I am one of those who wait for more than two hours per day to take a bus. I can’t afford taking a cab, as the ride would cost me 800 Syrian pounds.”

Abdl Monem Halabi, an economic expert, said, “The fuel crisis is causing a wide-scale controversy among the people in the city of Aleppo. The continuation of the crisis could lead to a catastrophe and higher prices of consumer goods due to the elevated transport cost. This is while the salaries have remained unchanged, without any significant increase.”

“The main reason behind the fuel crisis in the Syrian regime-held areas in general, and Aleppo in particular, is that most of the oil wells in Syria are not under the regime’s control, but rather under that of the Syrian Democratic Forces (SDF) in northeastern Syria,” he said. “Lately, large amounts of crude oil were smuggled from the SDF-controlled areas. These amounts used to meet the local market’s needs. Yet, in early April, the SDF banned the smuggling of oil to the regime areas, which caused the crisis.”

He added that the halt on the entry of Iranian oil has also exacerbated the crisis.