Power outages in Damascus are unbearable, yet the government just directs blame at the opposition, failing to provide solutions. 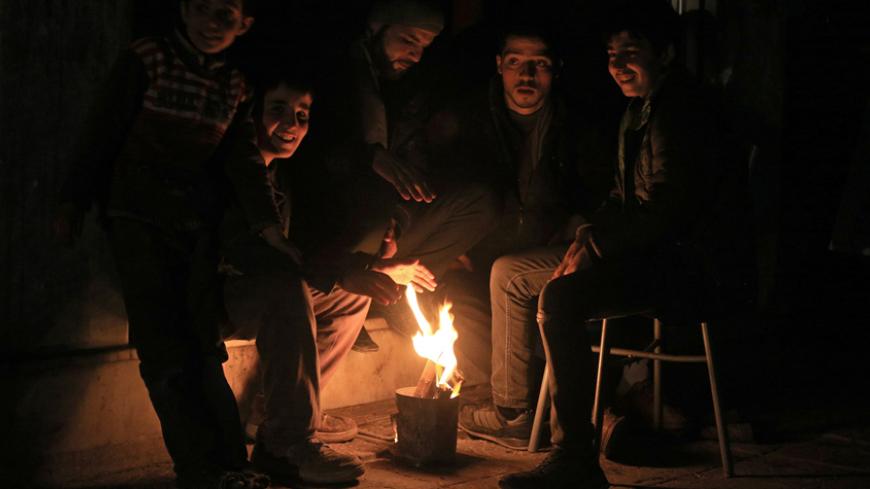 DAMASCUS, Syria — Homework and house chores are no longer the daily duties of Ammar, a high school student who hopes to one day attend medical school. Recurring electricity outages up to 15 hours a day are maddening in his neighborhood of Jaramana, about 9 kilometers (5.5 miles) northeast of Damascus. The city sits in total darkness at night, further compounding the opposition's daily shelling.

Nights in Jaramana and Damascus and its countryside are no longer glamorous as they were before the war. Damascus is now divided along sectarian, military and administrative lines, though all these areas share the constant power outages, whose duration depends on the proximity to the city center, wealthy areas and police centers. Power outages can also depend on the mood of electricity workers; some areas in the countryside are without electricity for days or weeks.

Ammar is surprised by the favoritism involved in electricity distribution. He blames the government, which, after four years of war, is still unable to control the electricity rationing process. He told Al-Monitor, “There are two branches of electricity on al-Rawda Street in Jaramana. One branch applies rationing 4 to 6 hours per day and rarely malfunctions, and another branch gets power for 15 minutes followed by 4 to 5 hours of power cuts for the whole day. Solving this problem with those responsible for the power transformers has become an impossible dream for me.”

The Syrian Ministry of Electricity and Energy in Damascus — which routinely asks citizens to pay their accumulated electric bills — is currently busy issuing statements condemning “terrorist acts” carried out by opposition gunmen in areas under the regime’s control. The ministry accuses them of blowing up power stations, and asserts that the government is trying to find solutions to the problem through stations that are still operable. The ministry states that it is attempting to use high-power transformers that can cover larger areas for longer periods.

Meanwhile, opposition gunmen accuse the regime of targeting large power stations in areas under opposition control that feed areas in Damascus and its countryside.

Though the Syrian government announced that it was updating its power stations, rationing hours have still not been reduced, according to Amir, a resident of Old Damascus.

He told Al-Monitor, “Things have been the same for more than two years. Electricity in the old city of Damascus is sometimes cut for up to 15 hours a day. When the power returns, there begins a series of outages as a result of thefts, especially by the shabiha [government thugs] and the popular committees, which are the groups responsible for the region. The outages are also due to the intense pressure on electric cables, since electricity has become almost the sole source of heating [homes]. … I sometimes wish that my home was in al-Rawda or Abu Rummana, or in other rich neighborhoods in central Damascus, or near a police station so that I could enjoy the electricity like those who live in those areas.”

The inhabitants of the capital and its suburbs have only two options to deal with the power outages, said Khalid, who lives in al-Maydan, located 5 kilometers (3 miles) south of Damascus. He told Al-Monitor, “The first option is to use large batteries, like car batteries, which can provide enough electricity to illuminate a few lights and the TV set for a few hours if the home installs LED lights, which are everywhere in the markets. The second option is to buy an electricity generator running on gasoline or diesel. This option may only be available to those who can afford it. [Generator] prices rose four to five times and are now about 150,000 Syrian pounds [$800]. [The owner] must also be able to secure the diesel or gasoline, whose price rose four years ago. A liter of diesel was 120 Syrian pounds [$1] last month. It used to be 8 pounds [15 cents] in 2010. [The higher price] is more than what the average Syrian citizen can afford.”

Power outages dramatically increased as a blizzard descended on Damascus in January. Some areas were without power for 10 days, as power stations were unable to handle the large demand. Electricity was the main source of heating in the absence of alternate energy sources, especially after the government's decision to raise prices on Jan. 17. This decision, called the “rationing of subsidies,” has affected diesel, gasoline and natural gas prices. The price of a gas cylinder has reached 5,000 Syrian pounds ($30) in some areas. Merchants have also secured a monopoly on such black-market goods. People now stand in line for hours to secure even a small amount of those necessities.

Damascus' rising prices and fuel scarcity were compounded by a drop in Iran’s oil supply to Syria. The bureaucracy that controls Iranian-Syrian cooperation on civil and economic levels also worsened the situation, especially after oil prices dropped to their lowest and the Islamic State secured control over many of Syria's northeastern oil fields. All of this worries the Syrian regime, since the country largely depends on Iranian oil. The situation prompted Syrian President Bashar al-Assad to send a message to his Iranian counterpart, Hassan Rouhani, through Syrian Prime Minister Wael al-Halqi to “develop and expand the prospects of bilateral relations and upgrade them to include new areas to strengthen bilateral cooperation.”

Ammar hopes that the ongoing power outages will not affect his studying to enter medical school. He was able to secure a generator to produce electricity during a power outage. Meanwhile, the regime and the opposition continue to blame the other for targeting the power stations.